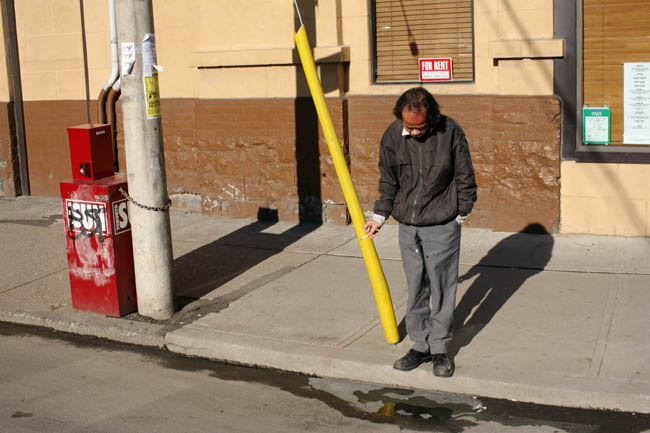 Last summer, I wrote an article in NOW magazine about pedestrians crossing in the middle of a block, noting that it is in fact legal to do so, so that there is no crime of “jaywalking” in Toronto.

Because of the necessity of writing engaging journalism, I didn’t go into all the legal details. And the message still hasn’t been received in a lot of quarters. Last week, the Toronto Star wrote an article talking about “jaywalkers” who “cross illegally” on Front St. in front of Union Station. In fact, “jaywalking” is a misnomer and it is perfectly legal for them to cross there (I wrote a letter to the Star but it hasn’t been published as of this date).

So here, in definitive form, is the law as it relates to pedestrians crossing mid-block in Toronto. This analysis is based on reading the relevant acts and laws along with the definitive The Annotated Ontario Highway Traffic Act, by Murray Segal, and on consultations with pedestrian activists and a police officer from the Toronto Police Service — Traffic Services division.

I am hoping that this post will become the definitive reference on this issue, and will help clear up the misconceptions around pedestrians crossing the street mid-block.

It is legal for pedestrians to cross the street mid-block anywhere in Toronto as long as:

a) they are not adjacent to a marked pedestrian crossing, and

b) they yield to traffic.

This legal situation is a combination of Ontario law, through the Highway Traffic Act, and City of Toronto by-laws.

The Ontario Highway Traffic Act regulates all behaviour on Ontario roads. If the Act does not specifically prohibit an activity, then that activity is not governed by the Act and is therefore legal.

Such crossings are therefore governed by the common law provision to “exercise due care.” Basically, that means exercising common sense on both sides — cars have to avoid hitting pedestrians, pedestrians have to avoid putting themselves in danger.

The situation was made more explicit in case law (Segal, 313):

In the absence of statutory provisions or by-law a pedestrian is not confined to a street crossing or intersection, and is entitled to cross at any point, although greater care may then be required of him or her at crossing.

But, because the stakes in a car-pedestrian collision are not even (the pedestrian will suffer far more) , the Act goes a step further. Section 193 (1) states:

So, if a driver hits a pedestrian, it’s up to the driver to prove they weren’t doing anything wrong (note – I don’t have the expertise to be able to say if this provision is in practice as strong as the Netherland’s assumption of driver liability in collisions with pedestrians, which I referred to in a recent article. A reader wrote in to suggest that the Ontario provision is in fact similar in strength, which may possibly be the case. But another complication is the addition of more restrictive municipal by-laws, noted below. Also, the case law over the years would affect the application of this provision — my sense from a quick survey when I wrote the NOW article last year was that the driver is almost always assigned some liability, but the pedestrian may be assigned some liability too if they were not exercising due care).

There is only one restriction in the Highway Traffic Act that affects pedestrians crossing in uncontrolled locations. In Section 144, which governs behaviour at traffic control signals and pedestrian control signals, sub-section (22) states:

Where portions of a roadway are marked for pedestrian use, no pedestrian shall cross the roadway except within a portion so marked.

There is no definition of what “Where” means, exactly, but since section 144 only deals with behaviour at signals themselves, this sub-section refers to the area immediately adjacent to the signals and marked crossing. It basically means that if a pedestrian is at or approaching a marked crossing, they have to cross within the lines — they can’t cross beside the lines or step outside them. It does not apply to an extended section of the street.

Perhaps because of the much greater interaction between pedestrians and motor vehicles in the city, the various municipalities that formed Metropolitan Toronto before amalgamation all had bylaws that added an extra level of regulation regarding pedestrians crossing at uncontrolled locations. These bylaws stated, in one way or another, that pedestrians crossing at uncontrolled locations should not interfere with traffic or should yield to traffic. For example, Metropolitan Toronto bylaw 32-92, Section 10, states:

Except where the traffic control signals are in operation or where traffic is being controlled by a police officer, a pedestrian crossing a highway at a place other than a pedestrian crossover shall yield the right-of-way to all vehicles and streetcars upon the roadway, but nothing in the section shall relieve the driver of a vehicle or streetcar from the obligation of taking all due care to avoid an accident.

In effect, pedestrians have to wait for a safe opportunity before they cross mid-block.

If you try to cross mid-block and get hit by a car that is obeying the speed limit and other laws, you were breaking the bylaw. Also, you’re pretty clearly breaking the bylaw if a car that is obeying the speed limit has to slow down suddenly or stop in order not to hit you. But the fear of suffering injury is probably a much greater deterrent to behaving in this way than the fear of a fine. The vast majority of pedestrians crossing mid-block in Toronto, who by natural instinct wait until there is a safe opportunity to cross, comply with the bylaws.

(I’m pretty sure that if a car chooses to stop to let you cross while you are waiting at the side of the road, as drivers sometimes do in Toronto, then your crossing is perfectly legal. The bylaw only applies if the pedestrian forces a change of behaviour on a vehicle in order to avoid a collision).

(Note also that those pedestrians who do get hit by a vehicle mid-block in Toronto were not necessarily breaking the bylaw — speeding is common on Toronto streets, and the higher the vehicle speed, the more severe the injuries. If a car is speeding, a pedestrian’s reasonable judgement about a safe opportunity to cross could get thrown off).

These bylaws have not yet been amalgamated, which means that the laws of the former municipalities are still in effect on the streets they controlled. This leads to some funny anomalies. For example, the fine for breaking the above Metro bylaw, which applies on the arterial roads that Metro controlled, is $8.75, which no police officer is likely to bother to enforce. But the fines for the local municipalities were quite a bit higher ($90), so in theory you could be fined more for interfering with traffic on a residential street than on a major arterial.

There are also certain expressways where pedestrians are prohibited from crossing anywhere by bylaw, but these are common sense: the Don Valley Parkway, the Gardiner, and Black Creek Drive from Jane to Weston road. These simply apply to the city-owned parts of expressways that are otherwise covered by the Ontario Highway Traffic Act, which includes a blanket prohibition of pedestrians walking on or crossing limited-access provincial expressways.