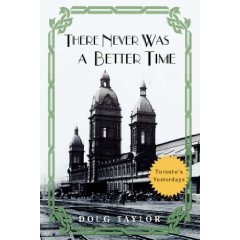 Local historian Doug Taylor (who is one of my neighbours) recently published his book There Never Was a Better Time, a fictionalized retelling of his father’s and uncles’ experiences of Toronto as young men in the 1920s. The narrative is based on their reminiscences about their lives at the time, filled in and enriched with Taylor’s own extensive research on local history, and with archival photographs. Each chapter ends with an author’s note in which Taylor explains the sources he used for that chapter, resulting in a book that is partially history, but structured around retellings of personal stories.

The book is full of descriptions of signature locations, events, and details of Toronto at the time, such as the Canadian National Exhibition at the height of its popularity. Here’s a brief passage I picked out that talks about two things quintessentially Toronto: the CNE and streetcars (specifically, new streetcar equipment and payment systems, which seems apt as we debate how the new Transit City lines will work).

During the third week of August, Jack eagerly scanned the newspapers for details of the Canadian National Exhibition. He read that the new streetcar “trailers” were to be on display. When attached to the rear of the cars on the Yonge Street line, these would double the capacity of each. On each trailer was a set of double doors. To board the trailer, passengers entered on the right side. To exit, they passed the conductor, who sat in the centre section. They paid their fare and then exited through the other side of the door. Passengers were unable to exit without passing the conductor. It was a fast method of transporting people and an efficient way to collect fares.

There will be a book launch for There Never Was a Better Time on Sunday at Metropolitan United Church. The author will do a reading, and there will also be panel displays of historical material relating to the book.