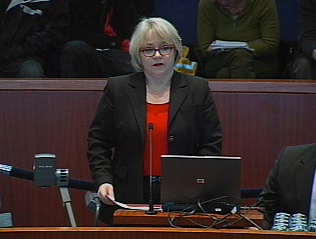 I just made these numbers up.  Pulled them out of the air.  They represent nothing.  Or maybe there’s a very particular system I used to arrive at and generate each, but I won’t tell you what that is.

The billboard industry does the same thing, except they commission expensive reports based on such numbers [PDF]. The Out-of-Home Marketing Association of Canada — composed of heavyweights Pattison, CBS, Astral, and Titan, as well as a handful of smaller companies — is hilarious.  Here’s the standard exchange their representatives have with Councillor Adam Vaughan and just about anyone else with the ability to think critically:

OMAC: “The proposed tax on billboards represents an unfairly large portion of our revenue.”

Vaughan: “Can we see your revenue numbers so that we can figure out what an appropriate tax rate would be?”

Vaughan: “Well, will you disclose those numbers to an independent third party who will keep them confidential?”

OMAC: “No.  But we have this other aggregate number that we can give you instead.”

Vaughan: “Can we see how you got that number?”

OMAC: “No. We’re telling you. That is the number.”

And on and on and again and again.  For about five hours, the most recent time. They’re shocked that anyone wouldn’t take them at their word.

IllegalSigns.ca has been debunking OMAC’s claims all year.  So have the sharper councillors.  And now thankfully City staff have joined the chorus. 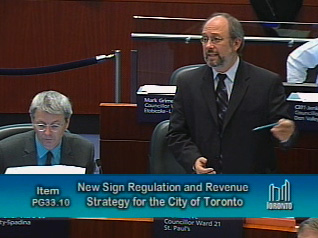 Ad companies used to be able to get away with telling City staff whatever they wanted.  (“You need 20 years to make back your money on street furniture?  Then a 20-year contract it shall be!”)  But now they’ve encountered a dilemma.  City staff are not only asking questions but follow-up questions.  They don’t just want to know what the numbers are, they want to know why the numbers are.  And if the ad industry’s paper doesn’t offer any sources then, well, they get a failing grade.

OMAC’s whole campaign, and the majority of their lobbying, is based on this report the association commissioned last spring.  Back then, City staff were proposing a tax that would bring in at least $16 million (one estimate, using the bids for the street furniture contract as a gauge of how much the industry could afford, had the tax bringing in upwards of $56 million a year).  The tax that’s currently before Council, however, would bring in $10.4 million a year.  So OMAC’s conclusion that the industry will horribly suffer is based on a tax that is 54% greater than the one actually being proposed.

Second, the industry’s numbers were made up, or if they weren’t, they may as well have been.  City staff note [PDF, page 18] that “The OMAC Study provided no verifiable data or a method that could be utilised to review the accuracy of the revenue and earnings information provided.” Nor are the numbers “consistent with the published rates for outdoor advertising in Toronto, or the rents received for advertising structures on City property.”  Basically, the industry whines (and sometimes openly heckles) staff and councillors, saying you just don’t understand us.  But when they’re actually asked to explain themselves, they steadfastly refuse to do so.

City staff, regardless of what the industry claims, have done their due diligence and analyzed every bit of actual, verifiable data they can get their hands on: the 33 billboards for which the City of Toronto is the landlord receiving rent from an ad company, the bids for the Coordinated Street Furniture Program, the advertising on the Sheppard line, and most importantly, the companies’ own CARD rates.  CARD is Canadian Advertising Rates and Data, the Rogers-published directory of advertising rates across all media; it’s mostly available as a paid-access online database but also comes out in an annual print edition. (If you’re a current university student or faculty, there’s a good chance you can log in through the website of your school’s library.) City staff used CARD information and then discounted all of the numbers by 30% to account for periods of vacancy (i.e. when a sign isn’t rented) as well as the markdowns that the companies frequently offer their clients.  This 30% number is what the industry told City staff in their consultations, and staff checked it against the City’s own leasing data.

Given everything the City has been able to determine about the billboard industry, the tax works out to 4.7—7.37% of a company’s revenue.  This is approximately the equivalent of the GST, which hardly seems to have had any negative effect on the industry in the nearly nineteen years since it was introduced. (For that matter, it’s also smaller than the percentage that the price of a Metropass is going to increase next month.)

“Saying that information is inconsistent is not saying it is false,” a commenter on IllegalSigns.ca grumbles.  “The only rebuttal [the City has] is a professor and city staff who are not even familiar with the industry.”

Well, yes.  And here we see what the industry has been attempting to do all along.  They’ve essentially offered City staff what they see as an ultimatum: either trust the scant numbers we’re showing you or face accusations of willful ignorance.  City staff, to their credit, have not bought into this and have stuck to their own analyses, confident that they’ve done as good a job as anyone can while being stonewalled by an industry that of course does not want to be taxed.

(David Amborski, by the way, is the economics professor whom the City hired, and pages 22-23 of this PDF comprise his own analysis and dismissal of the OMAC report.)

What it’s going to come down to at Council today is whether city councillors have more faith in their own staff or in the industry that’s held them in such contempt for decades.

Watch the online stream, come out to City Hall, or follow the #TOcouncil hashtag on Twitter.  The debate will likely go on all day.

Jonathan Goldsbie is a campaigner with the Toronto Public Space Committee.