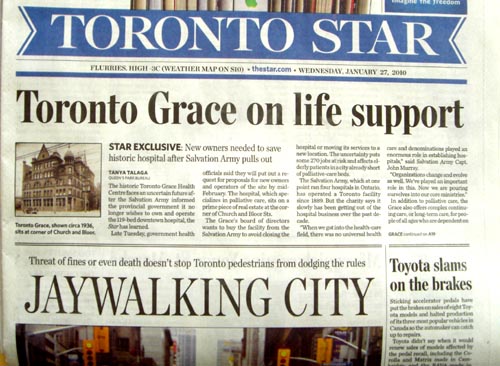 The Toronto Star today published an article on the front page, with the all-caps headline above the fold, “JAYWALKING CITY“.

In the article, the reporter stood on Yonge St. north of Front during lunch hour and watched people cross in the middle of the block. The reporter then wrote that this behaviour was illegal, and said as much to some of the pedestrians. The gist of the article was about all these pedestrians behaving illegally, and relating it to the rash of recent pedestrian deaths in the city.

One problem: Crossing mid-block is NOT illegal.

The reporter had the law wrong, and the basis of this story is false.

It is perfectly legal to cross the street mid-block in Toronto. The law says you can do it as long as you don’t interfere with traffic, and you’re not right beside a crosswalk.

Since there are lights at either end of that block, I’m guessing that there were plenty of gaps in traffic that the walkers used to cross safely. Furthermore, traffic in this area is dense and slow, which also makes it easy to cross without interfering with traffic. No doubt a few of these pedestrians forced cars to slow or stop to avoid hitting them — those few were indeed in breach of the bylaw. But the vast majority of pedestrians who cross mid-block wait for a gap, for the simple necessity of self-preservation.

The cutesy “info-graphic” that accompanied the story showed just how far off base the story was in its assumptions. Two of the four species of “illegal jaywalkers” described, the “peacock” and the “chicken”, are in fact crossing completely legally by waiting for a gap. The other two, the inattentive and the speedsters, aren’t necessarily illegal — it would depend on circumstances.

Of course, the large number of pedestrians makes for an easy story for the reporter. The fact it’s conveniently only a few blocks north of the Star‘s offices might have helped too. Why not instead go to an intersection where a pedestrian actually got killed? You wouldn’t have to go far – Broadview and Danforth, for example. And then maybe look at driver’s behaviour as well as pedestrians.

The worst thing is, stories like this are actually dangerous to pedestrians. They reinforce drivers’ perceptions — as expressed on radio talk shows and the comments section of the Star and Globe, among many other places — that it’s all pedestrians’ fault and that drivers have no need to examine their own behaviour. So drivers do not look at what they can do to drive more safely. But drivers DO need to examine their own behaviour. Many of the recent deaths were the result of driving inattentively or dangerously and hitting pedestrians crossing on a green light.

I’ve often heard people say that the difference between traditional media and blogs is that traditional media have the resources to do in-depth research. So what to make of Canada’s largest newspaper splashing an incorrect and unresearched story on its front page?

I think it’s important not to let the Star get away with this irresponsible laziness. You can write a letter to the editor at lettertoed@thestar.ca. Fortunately, the Star is also one of the few newspapers with a public editor. Please write to the public editor too at: publiced@thestar.ca to complain about this inaccurate and misleading story.