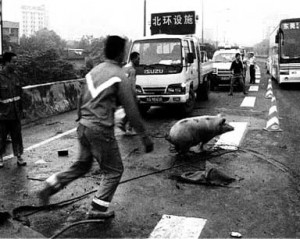 Population density inevitably increases turmoil. Although the size of  a municipality is often directly linked to the amount of regulation and mechanization that goes on within it, places that are crowded, that are full of people (and animals, and equipment), will always more quickly fall into chaos. The trope of overcrowded Asia appears everywhere on film: a crossing in Shinjuku, Tokyo, a hodgepodge of bicycles, vehicles and animals in Manila, slum-like apartment blocks in Hong Kong. And while it is hard to conceive of any particular place containing a billion people, footage of China is certainly the go-to image for “place that is overcrowded”. The scenes are, most typically, that of a thousand faces on a corner, surrounded by a thousand street scenes. But what is such chaos made up of?

Huang Weikai’s Disorder, shot entirely in black and white, opens with a fire hydrant exploding into the grainy night, cars sliding wildly to avoid the man-made waterfall. The scene cuts to a man laying in the road in front of a car, the worried driver standing over him. There is no blood—are his injuries perhaps internal, more serious than imagined? Or is this man, as the driver soon asserts, a professional scammer? Back at the fire hydrant, an unseen witness remarks that, far from trying to avoid the gushing chutes, the cars are trying to get under it; a free car wash is a hard thing to come by, and professional jobs are expensive.The bureaucracy of the city, too, makes seemingly simple situations suddenly complex. A man at a restaurant stares dolefully at the shiny cockroach floating in his soup. The audience’s response is instant and uniform. But: “There’s no telling how this cockroach got here,” the Buddha-like on-sight health inspector tells him. “Each person has their own version.”

Disorder gathers together video footage shot around southern China by eight filmmakers. Originally one thousand hours of footage, Weikai has curated his finds down to fifty-eight minutes of short, interspersed sequences that examine how humans deal with chaos, and how the systems put in place to create structure can ensnare those caught within it. To audiences, Weikai has repeatedly insisted that they must find the narrative in their minds, that the film’s sequences are meant only as questions.With no narration and sparse dialogue, how the viewer pieces the scenes together becomes a very personal experience;

Anyone interested in the threads of cities, in the minutia of functionalities that make up the running of a place, will be enthralled with Disorder.