Yesterday afternoon, Rob Ford apologized to Dieter Doneit-Henderson, an HIV-positive gay man, for his well-documented 2006 remarks about people with AIDS.  By the bizarre logic of the Toronto Star, the Rob Ford campaign, and of elections in general, Doneit-Henderson is a synecdoche for all those who could possibly have been offended by Ford’s ignorant comments. (I am reminded of the South Park episode in which Stan’s father utters the n-word on Wheel of Fortune, subsequently says sorry to Rev. Jesse Jackson, and is later admonished that “Jesse Jackson is not the emperor of black people!”)

In any case, why is Ford bothering to express remorse at all? According to an email sent out to supporters on Sunday night, his AIDS comments are only an issue because “special interests, lobbyists, and elites” want to distract from his fiscal policies. Here’s what it said: 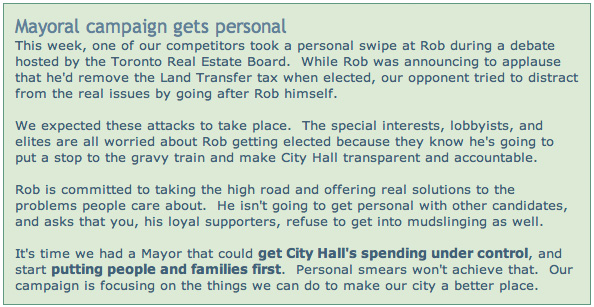 So there you have it.  If you dare hold Rob Ford to account for anything he has ever said, it is because you love gravy trains and hate accountability.

And, really, Rob: If you’re going to cite your family’s personal connections to the family of the federal Finance Minister as a reason you’d be a good mayor, you have no business blasting “elites.”