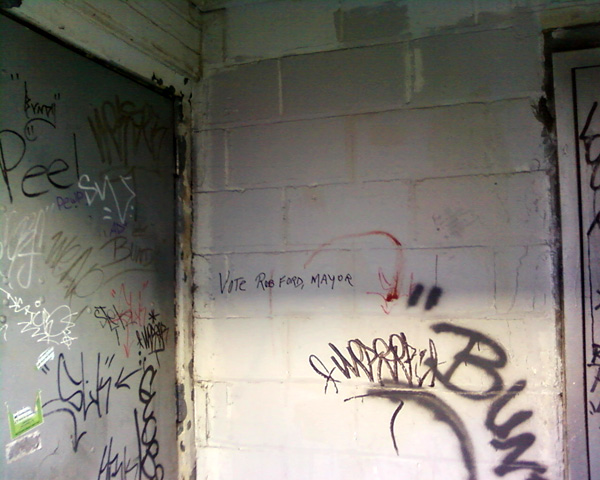 As though you hadn’t already figured that one out, huh? When even Toronto Life headlines a blog post “Non-existent poll gives Rob Ford fictional lead over Smitherman,” it’s fair to say the jig is up and that the oft-recurring gossip is bogus.  What is interesting, however, and is the explanation I so very much want to believe, is that it was supposedly a rumour deliberately planted to test the laziness of the City Hall press corps.

A call to the senior staffer who we were told had started the whispers “for fun” didn’t really yield much in the way of an admission: “I know not what you speak of,” followed by repeated refusals to comment on the matter or any related issues.  Fair enough.  Hardly incriminating.

But it’s not so much the origin that interests me as it is the purported motive.  Here’s a breakdown of how the story played out, media-wise:

On Wednesday, May 12, City Council dealt with the Integrity Commissioner’s “Report on Violation of Code of Conduct by Councillor Ford” [PDF].  Ford, citing a conflict of interest, recused himself from the debate and retreated to his office. (No such recusal was necessary, but he didn’t much care.) In his absence, the remaining councillors wrestled with the perpetual problem of how to discipline Ford without inadvertently rendering him a martyr.  The Integrity Commissioner had recommended a reprimand, and although Council eventually voted to do just that, there was much discussion about the actual utility of such a move.

This was more or less a replay of a debate that had taken place at Council over a year earlier, albeit at 1:00 in the morning.  On that occasion, the previous Integrity Commissioner had found that Ford had violated the Code of Conduct by repeatedly, publicly, and baselessly accusing Adam Vaughan of influence peddling.  At the time, I wrote that “the councillors began addressing the problem of Ford on an existential level; like a lumbering, unfathomably stupid Anton Chigurh, nothing seems to be able to stop or dissuade him from saying and doing essentially the same dumb, harmful, and offensive things over and over again. He is almost beyond reason and comprehension — a force of nature, a fact of life.”

And so again, two weeks ago, Vaughan put out the question, “Is this guy reachable?”  He wondered about the prospect of a Ford-led city, mentioning that there was a new Toronto Star poll putting him in first place.  I was in attendance at the meeting and promptly tweeted this at 7:04 p.m., launching the gossip into the Twittersphere, where it did the predictable bouncing around.

The first mainstream article to mention the “poll” was a blog post from the Globe‘s Kelly Grant at 8:55 that evening: “Rumours are flying that at least one yet-to-be-released poll has the Etobicoke populist in first place.”

In an article posted 12 minutes later, the Sun‘s Jonathan Jenkins quoted Vaughan: “There’s a poll coming out (Wednesday) that says he’s in first place (in the mayoral race).”  This was presumably a transcript, but I do wonder, because Jenkins also quotes Vaughan as having said, “You want to elect Sarah Palin, you’ve got the candidate before you.”  A tweet of mine had had Vaughan saying exactly those words, even though the Globe‘s Grant (who, given the structure of her article, was almost certainly working from a tape recording), gave the quote as, “If we want to elect Sarah Palin as the mayor of Toronto we can do it. We’ve got a candidate in front of us.”  The next afternoon, Toronto Life excerpted both of Vaughan’s lines from the Sun story to kick off a post listing parallels between Ford and Palin.

The Star, meanwhile, played coy, at least initially.  At 9:35 the following night, David Rider wrote a blog post headed “New poll (maybe) to show Ford is (maybe) on top!” The article was originally about Star City Hall reporter Robyn Doolittle’s bemusement at Vaughan’s declaration, stating that the alleged existence of such a Star poll was certainly news to her.  Rider later rewrote his post, however, to take the form of an outright denial on behalf of the paper. (I am unable to find the original version online.)  He also appended an email blast from the Ford camp that, with adorably circular logic, itself repeated the hearsay that there was an “upcoming poll coming out this weekend rumoured showing Councillor Ford leading the polls!!!!”  A “source” in the Ford campaign even told Rider it was coming from CTV Toronto and would place Ford “a couple of points ahead.”

All of this was once again rehashed by Toronto Life‘s prolific regurgitator on Friday the 21st, who reminded us that no poll had yet materialized.  That didn’t stop the following day’s Star from printing that “Rumours of a new poll that put Ford and Smitherman in a dead heat and Pantalone trailing behind have been circulating for weeks.”

That, my friends, is how you create something from nothing.  There’s of course a political advantage to both Smitherman and Pantalone for people to believe that Ford is more popular than he is — if ever there were an incompetent, conservative boogeyman to propel progressive voters to the polls, he’s it — so even if this rumour does have its genesis in a prank, it wasn’t necessarily an apolitical one.

I caught up with Vaughan yesterday to ask where he’d first heard it.  He said the rumour had been whispered among councillors all throughout that day’s Council session and that he himself had put on his journalist hat to do some investigating: was it a media poll, an internal poll, a push poll?  He talked to several news outlets, which declined to offer him straight answers.  He also called various campaigns because, as he explained to me, polling firms often tip them off before they release the numbers, in order to get their reactions.  Everyone everywhere had heard the rumour, he said, but no one could peg the source.

As for it being started by a particular staffer, Vaughan had heard “that joke,” too.  Much as the real story here is the very plausibility of Ford being in first, he also found the fucking-with-the-media take to be in the realm of possibility.

So if the goal was indeed to inject some contrast dye into the blood stream of the City Hall press channels, this was undoubtedly a successful experiment.  These days, as the authors of Game Change explained to the Star on the weekend, it’s as much the responsibility of the government to call bullshit on the media as the other way around.

And the latest poll (Environics, April 19th–May 8th) has Ford in second. Take that.

Jonathan Goldsbie is a contributor to the National Post but would happily have worked them into this article if he’d been able to dig up an instance of them citing the Ford-in-first rumour.  If there’s something he missed, feel free to email or comment.