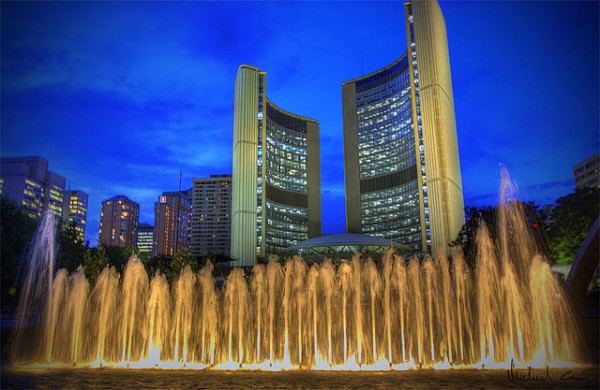 • First up, John Lorinc looks towards Rob Ford and his possible governance tactics, if elected mayor, of course. Good governance is a bit of a sore point for many Torontonians and Ford at the helm with his “muddled headed ideas” might not serve for the better. But there is a saving grace. As chief planner Paul Bedford recently opined, the changing of the guard at City Hall can serve well for a constructive debate surrounding the city’s governance. Fingers crossed.

• Unlike governance, there has been chatter around cycling in this mayoral race. A good deal, argues Mike Radoslav in analyzing each of the candidate’s cycling platforms. Who’s promising what? Who’s promising to tear down what? And how has Ford changed his original thoughts on biking in the city with his now-infamous “swimming with the sharks” video. I know you’re curious, so here you go.

• Time to self-reflect: How has the media fared in this election, has the media put Ford into place and then tore him down, and where are the, you know, real issues (see: governance) in the headlines? Some of the topics brought up by a panel of seasoned journalists, and then somewhat defended after the audience had a lot to say in an election panel earlier this week.

• And then the game of who-likes-who in politics — the endorsements. With the last couple of weeks seeing the endorsements starting to roll out, the frontrunners are receiving their share of love. Mayoral drop-out Giorgio Mammoliti jumped behind Ford, Sarah Thomson aligned with Smitherman, current mayor David Miller shook hands with Joe Pantalone and retiring Councillor Mike Feldman got behind Rocco Rossi. But what do endorsements really mean and how much weight do they pack, Thomas Csercsa explores.

• And a number of politicians — including Mayor Miller, Pantalone, John Tory and Smitherman — came out to Spacing’s release party of the new issue. So thank you, politicians, for the open dialogue.