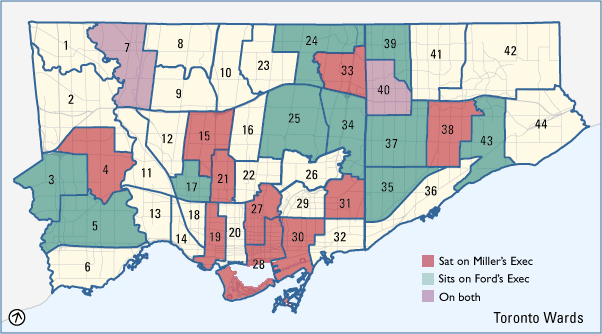 Comparing the geographic representation of Miller’s and Ford’s Executive Committees. Pretend there’s an asterisk in ward 4 (explained in a bullet point below).

On a recent edition of Metro Morning, Councillor Adam Vaughan argued that — for strictly practical reasons — it is foolhardy for Mayor Ford to not have placed any representatives from the former City of Toronto on major committees. “The reality is is that when you try to stage something like the G20 or when you have to run a streetcar line through a dense urban neighbourhood, as opposed to a differently built neighbourhood north of the 401…it’s a different experience,” the ward 20 (Trinity-Spadina) councillor explained. “And just as I wouldn’t expect to have the expertise to manage affairs in Giorgio Mammoliti’s part of the city, or Denzil Minnan-Wong’s part of the city, I think they need my advice — and not just my advice but the advice that I bring to the table on behalf of the businesses and the residents I represent — when making critical decisions about infrastructure investments, about how to stage a parade, about how to effectively govern the city.”

Running counter to this is the myth that Mayor Ford’s committees are merely an inversion of Mayor Miller’s and that the people speaking out about the exclusion of the downtown are simply sore losers. What’s getting lost in the discussion is that while Miller’s committees indeed drew most heavily from the core, he would usually make an effort to include representation from each of the city’s major districts.

I’ve made up some graphics to illustrate the contrast in Miller’s and Ford’s approaches to populating their Executive Committees, Budget Committees, and Toronto Transit Commissions.  (Vaughan also cites Ford’s appointees to the Police Services Board and Toronto Community Housing Board as similarly problematic, but because neither is exclusively comprised of city councillors, illustrating their memberships in map form is not quite as straightforward.)

In all cases, I’ve compared the new entities to the way they looked following the shuffle mid-way through Miller’s second term.  And as for neatly slotting each ward into a particular district, I’ve gone with the breakdown used for the community councils.

• The mayor is the chair of the Executive Committee, but of course does not himself represent a particular ward.  That said, before being elected to the top office, Miller represented ward 13 (Parkdale–High Park) and Ford represented ward 2 (Etobicoke North).

• Brian Ashton (ward 36, Scarborough Southwest) was a member of Miller’s Executive when it was first established in December 2006.  But Miller requested Ashton’s resignation in late July, 2007, shortly after his last-minute change of heart on the Vehicle Registration and Land Transfer Taxes.  The mayor then approached Adrian Heaps — the other Scarborough Southwest councillor — to fill the spot, but Heaps declined. (According to a Star article at the time, one reason Miller “was keen on Heaps [was] because the councillor represents Scarborough, an area the mayor is eager to include when appointing councillors to key committees.”)  Miller then instead went with Janet Davis, who represents the adjacent ward 31, in the heart of East York.

• Three days after Mayor Miller’s September 25, 2009, announcement that he would not seek a third term, Councillor Gloria Lindsay Luby (ward 4, Etobicoke Centre) abruptly quit his Executive, as she evidently deduced there was nothing left to gain (and possibly much to lose) by continuing to align herself with him.  Councillor Peter Milczyn, no fan of Miller, offered this blunt quote to the Globe: “The one thing you can count on with Gloria is that she’s nakedly ambitious and self-serving.” She was not replaced. 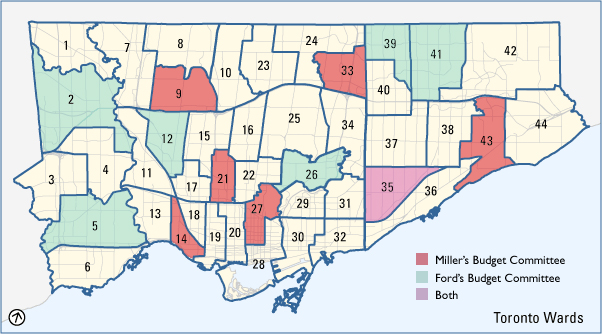 • The membership of Miller’s Budget Committee remained stable throughout his second term. 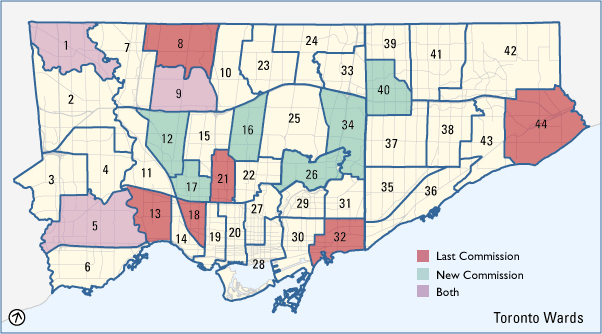 “It’s not an ideological thing, or a cultural thing,” Vaughan told Metro Morning.  “It’s just that the lived experience of people who live in particular parts of the city are what comprise our civic intelligence and our institutional memory.  And if they’ve chosen not to have that around the table…it’s gonna be a difficult time to work together, not on ideological issues…but just on how to manage the physical realities of Toronto. You need everyone’s input to make good, smart decisions.”