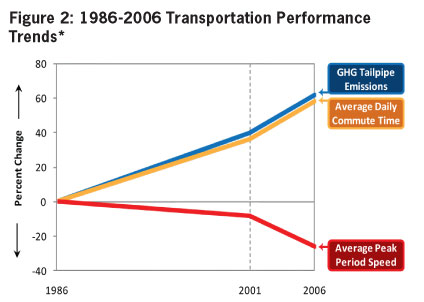 Figures are for the Greater Toronto and Hamilton Area. From GTA Summit backgrounder, Keeping on Track (PDF)

I was fortunate to be invited to take part in the Greater Toronto Summit organized by CivicAction (formerly the Toronto City Summit Alliance) last week.

Not surprisingly, a lot of the discussion at the summit focused on transportation issues. As a backgrounder prepared for the Summit laid out (PDF; disclosure – I was part of the discussions leading to this document), Toronto is facing something of a transportation crisis — demand for roads and transit is increasing much faster than supply, meaning that commuting times are increasing and average speed of travel is plummeting. The cost in wasted time and productivity (not to mention increased pollution) is estimated in the billions, and it’s likely to get worse rapidly.

Sometimes the strongest apostles are the recently converted, and at a mayors’ panel Hazel McCallion, Mayor of once-sprawling, now-intensifying Mississauga, highlighted the need to coordinate investment in transit with the dense development that provides new lines with ridership. She suggested the fairly radical idea that Metrolinx, the provincial agency that now oversees regional transit, should also be given power over development in the GTA. In a similar vein, planner Ken Greenberg cited “Toronto’s Mohawk”, the spurts of high-rise development along Toronto’s Yonge subway line from Front to Steeles, as the exemplar of how to make a subway line viable.

At the breakout session on transportation, the table I sat at agreed that, if the City of Toronto’s new administration remained uninterested in transit projects whose cost was reasonably proportional to the expected ridership, it made sense for the Province to put Toronto on hold and direct its immediate effort and money into cities that are keen on new rail transit projects that are affordable, such as Hamilton and Mississauga.

At the same breakout session, there was also a lot of talk about the way that Toronto’s recent election had revealed the helplessness of Metrolinx. What’s the point of creating a 25-year transit plan (The Big Move), if significant parts of it can be tossed out at any time by an election in one of the regional municipalities? At the same time, however, any long-term plan needs to have the capacity to change over time as circumstances change.

One of the tables came up with an interesting idea for a solution — give The Big Move legal status, like the Province’s Places to Grow regional growth plan, which requires municipalities to conform to it. At the same time, establish a fully-defined change process so that, if a City wants to change the plan, there are guidelines in place for how to assess the proposed changes and decide on how to proceed, rather than the ad hoc negotiations that are apparently taking place now.

While Toronto’s new administration may be causing consternation in terms of planning new transit lines, however, it was evidently much more welcome in terms of integrating transit fare payment across the region. At a discussion by regional mayors, McCallion was scathing about Toronto’s lack of cooperation in all kinds of regional initiatives under previous administrations, including the introduction of a unified regional transit fare card. The non-Toronto mayors (and Metrolinx) were relieved that the new mayor of Toronto and the new TTC commission are favourable to introducing the Presto card across the full TTC. The card could also, for example, make it more viable to use GO transit to travel within Toronto in conjunction with the TTC, which has the potential make extended travel across this large city much faster. It could be that the regional fare card will be the most useful transit achievement of the Ford era. (Metrolinx included a Presto card in every delegate’s package to publicize it).

The elephant in the room, when it comes to regional transit, is long-term funding. The Provincial government has provided billions of dollars to get The Big Move started, but these funds will only pay for the first few years of building. After that, Metrolinx needs to raise its own money. The Summit backgrounder includes a list of possible funding mechanisms, with tolls on the 400-series highways at the top. 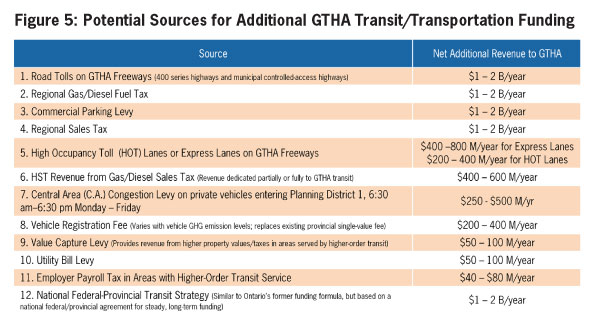 From GTA Summit backgrounder, Keeping on Track (PDF). See the roundtable report “Time to Get Serious” (PDF) for full analysis of these options.

Tolls are appealing because they also have the potential to reduce congestion by diverting some car trips to other modes. But, as someone in our roundtable discussion pointed out, there’s a “chicken-and-egg” problem. Many of the GO lines, along with the Yonge Subway, are already used at capacity during commuting hours. If there is no viable transit capacity to move to, people in cars are still going to have to use their cars if tolls are in place, so it will not reduce congestion much. While the Province’s up-front money will expand some transit options, it’s not going to cover every route where people would have to pay tolls. On the other hand, without tolls or some other major source of funding, no additional transit routes will get built once the initial funding runs out. It’s both a practical problem, and also a political problem, given that the vast majority of commuters in the GTA drive to work and are not likely to take kindly to tolls, especially if they don’t result in a visible benefit by reducing congestion.