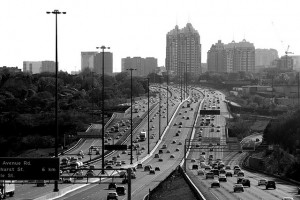 The Chou family loves to visit Toronto; they are the only Asians in Irvine, Ontario, and feel at home along the busy streets of Chinatown, where they can visit relatives and speak their own language. In the early 1960s, Su-Jen’s family begins to travel to and from Toronto more often.

There are several reasons for the increased frequency of these trips. The dark secrecy that drives the plot of Midnight at the Dragon Café is truly what drives the family an hour west: the arrival of Su-Jen’s tense, angry older brother, her mother’s misery, her father’s increasing loneliness. Toronto is a means of escape.

But the more literal reason the family begins to make the journey is interesting in its own right: in the early 1960s, the Highway 401 finally passed through Irvine:

“When the highway was being built, Mr. Swackhammer and Officer Grisham, the new policeman, had talked about it almost every day as they sat at the restaurant counter drinking coffee. They told me with great excitement they would be able to drive to Toronto in under an hour because they wouldn’t have to pass through all the small towns. They said that the road would be like the big highways in the United States.” (185)

The Highway 401, also known as the King’s Highway, the Macdonald-Cartier Freeway, and the Highway of Heroes (between Trenton and the Don Valley Parkway), has a long, patchwork history. First suggested in 1938, the road that now stretches from Windsor to the Quebec border, fourteen lanes wide in places, was built in stints, sometimes forging new ground, but often replacing other smaller, and more winding routes.

By “pass through all those small towns,” Bates means Highway 2, the predecessor of the 401, whose own predecessor was the 18th century roadways early settlers built on top of well-worn Aboriginal trails. Highway 2 finally lost its highway status, re-established as a local route, only in the last fifteen years.

The Great Canadian Trivia Book suggests that the building of the 401 was “the most important single development changing the social and economic pattern of Ontario.” For store owners and delivery men, like Mr. Swackhammer and the Chou’s friend Pock Mark, who delivers Chinese groceries from Toronto to all of the Chinese families of southwestern Ontario, the highway represented genuine economic transformation.

But for others the 401 changed the landscape unfavourably: for instance, motel owners along Kingston Road in Scarborough, formerly part of Highway 2, saw their business completely disappear once Toronto was quick to get to. And for the Chou family, too, the easy journey to Toronto acts in two ways, as both a point of release, and a source of familial betrayal.

Great historical photos of the 401 have been collected by Cameron Bevers here.
Highway 401 photo by Lone Primate used under Creative Commons.