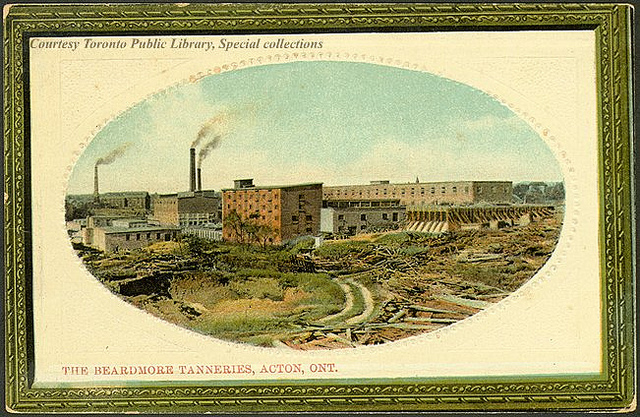 Where is Irvine, Ontario? Su-Jen’s descriptions of the quiet small town, with its hardware store, bakery, and five and dime along main street make it sound like it could be anywhere: “the streets were never busy, not even on Saturdays….even though most of the buildings were made of red brick, the feeling was grey.”

What distinguishes Irvine is its tanning factory, a place that employees much of the town, and that leaves a heavy scent in the air. Pock Mark Lee, delivery man and family friend, jokes that he knows he’s getting to Irvine from the smell, “so thick it seemed almost to coat the inside of your mouth.”

Su-Jen’s associations with the tannery are vague: tannery workerss come to the Dragon Café for dinner, its smell bothers her when it’s hot, and the owner’s granddaughter, Hilary Beeston, is the richest girl in her class. Still, the factory is a constant presence in Midnight at the Dragon Café. It is responsible “for almost every job in town,” and its scent seems to expand on the harsh, sour mood of the novel’s protagonists.

Tanneries in Canada have a long history, going back to the 16th century in and around Montreal and Quebec City. But Ontario was quicker to adopt new aging methods in the 19th century, and its tanneries flourished while Quebec’s went into decline. By the 1950s there were about 30 tanneries in Ontario, almost all of them larger than any in Quebec.

While it would be silly to insist that Irvine is any town in particular, it does bear a resemblance to Acton, still sometimes called Leathertown, today a section of Halton Hills. Acton’s Beardmore Tannery, which operated until 1986, was billed as the largest tanning operation in the British Empire in 1900, and employed hundreds of workers. Despite three major fires in the twentieth century, Beardmore remained the largest tannery in Canada into the 1970s. Perhaps you remember the Olde Hide House ads: “It’s worth the drive to Acton?” While the Beardmore factory is long demolished, it is still celebrated as an integral part of the town history: it was the focal point of Halton Region Museum’s heritage day in 2009, and its gates are still a stop on the Acton Nature Trail along Black Creek.