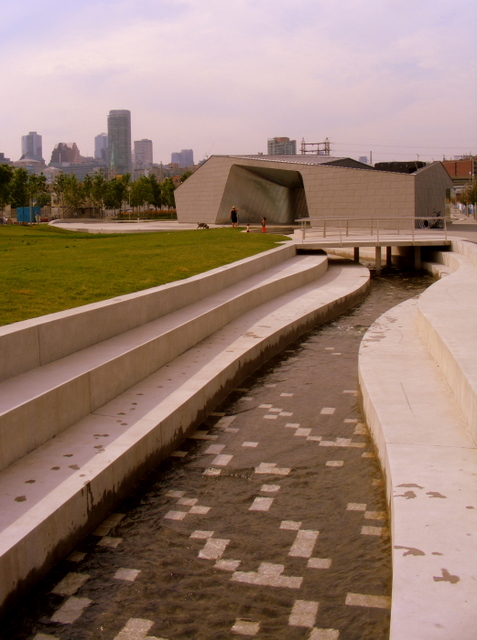 Toronto is often called ‘a city within a park,’ a nickname which not only conjures a pretty picture but is a pretty good goal for any city. In some ways we do live up to the name – there are over 1,500 parks across Toronto that cover more than 20,000 acres and the number grows each year. This year alone nine new parks are expected to be added to the list and over the next few days I’ll be introducing some of these new and soon-to-be parks.

With the opening of the second half of Sherbourne Common the week before last there seems to be a new awareness, a certain excitement, about city parks. Perhaps it’s because Sherbourne Common is unlike most city parks – it’s a combination of impressive design, practicality, and enjoyment. Or perhaps it’s because over the past few years (and hopefully the next few too) Waterfront Toronto has propelled urban design forward in this city. Sugar Beach has become the hot spot for beach loungers on sunny days and the wavedecks along Queens Quay are always filled with wide-eyed children and strolling couples; Sherbourne Common is the next of several steps in Toronto’s emerging waterfront.

Biking east along dusty Queen Quay, past Redpath’s underwater mural and the pink umbrella’s of Sugar Beach, Sherbourne Common appears as an oasis amidst the surrounding construction and traffic. The northern portion is primarily a playground with solitary swings and post-modern climbing structures – the contours of the structures embrace and accentuate the forms of the skyscrapers behind them making it at first easier to stare at them in wonder than to climb. Along side the playground are the arms of Jill Anholt’s ‘Light Showers’ sculpture rise to let freshly-filtered water pulse down their chain-link screens into narrow pools lined with native grasses.

In the southern half, which stretches from Queen’s Quay to the harbour’s edge, the water emerges again spraying out of the splash pad and rushing through a softly winding stream which, when I last visited, was full of excited children chasing a floating flip flop under the bridges and around the subtle bends to the quay. In the winter the splash pad transforms into a skating rink and the crystal shaped building which holds the washrooms will soon have a café for skaters and splashers alike. 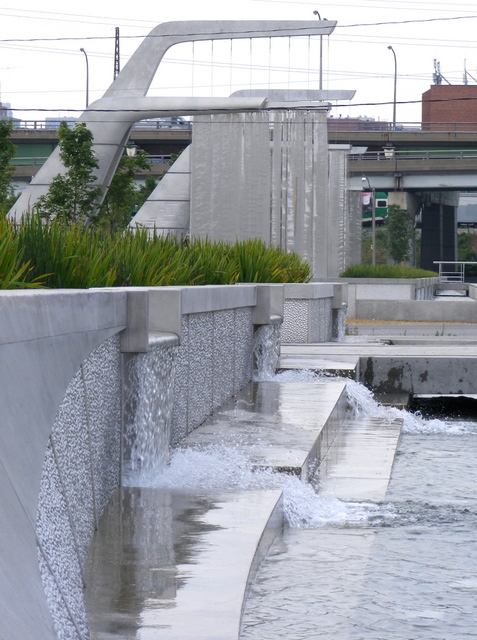 The stream running through the park with Jill Anholt's water sculpture in the background. 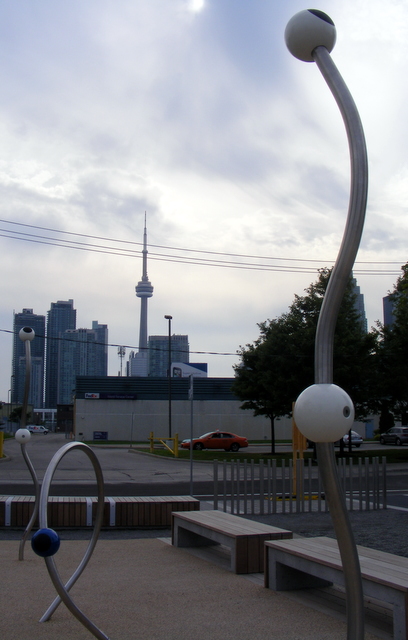 The galactic-like climbing structures in the northern portion of Sherbourne Common.

And best of all is the ultraviolet storm water filtration system – a ingenious gem hidden in the basement. Storm water from East Bayfront is collected and filtered (without the use of chemicals) below ground before being released in the sprays in the splashpad, the walls of water cascading down the three arms of the sculpture, and the 240 metres of the rushing channel. The first park in Canada to incorporate this kind of technology into its water system, Sherbourne Common blends water treatment with water play seamlessly.

There are still a few kinks to work out – there is currently no safe way to cross the four lanes of fast traffic along Queens Quay and the park itself still feels removed from any sort of community – but once the canopy of the park’s many trees flush out and the George Brown campus and Parkside Development is complete the park is sure to be an even greater amenity for Toronto’s waterfront. 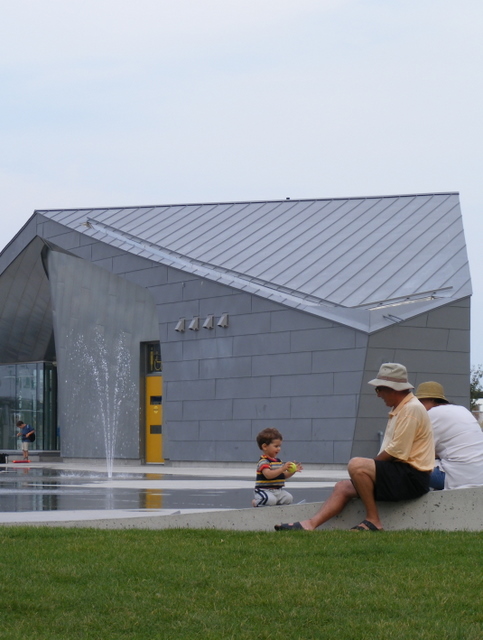 A view of the splash pad and the crystal shaped building that house the washrooms, a cafe, and a UV water treatment system in the basement.