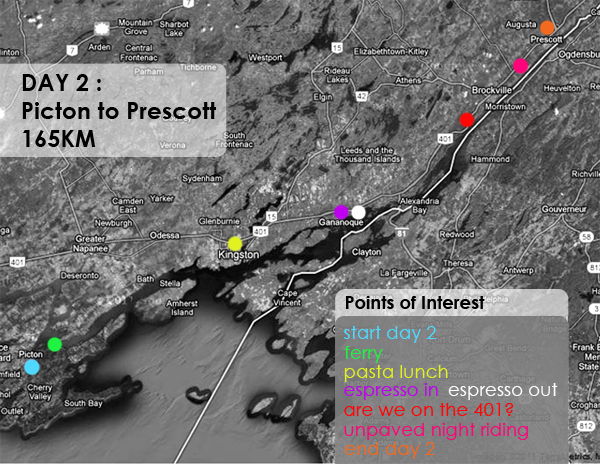 A slow start to the morning came after Joanne took our still soaking-wet gear to be dried. We rode several kilometers up (from Picton) to the Glenora Ferry dock. The ferry ride was about 10 minutes long and serves as a continuation of the road (for cars, cyclists and pedestrians) to Adolphustown. We enjoyed the view and snuck in some stretching. 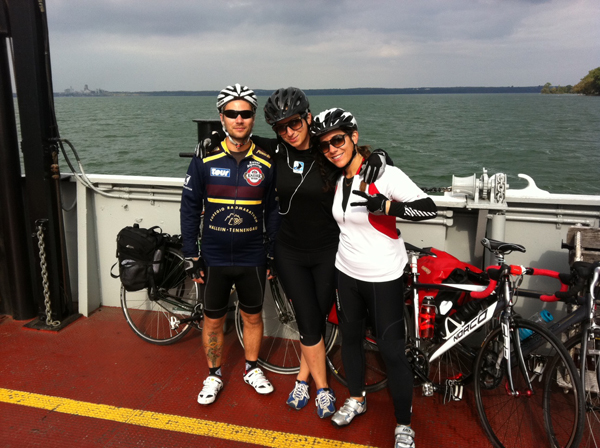 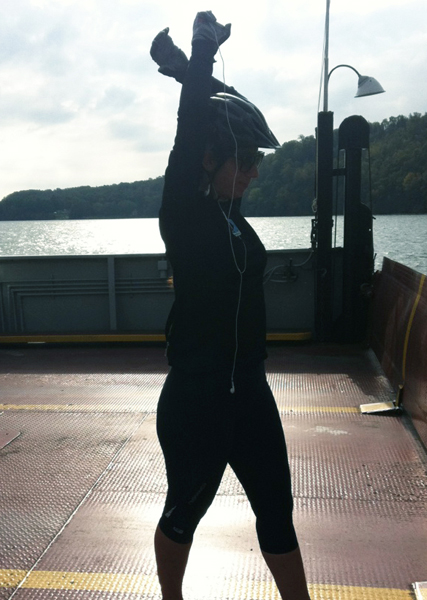 En route to Kingston: The city is working on developing its cycling infrastructure. At that point, some roads had unhelpful sharrows reminding vehicles of cyclists, while most had no suggestion of cyclists at all. Pot holes and lots of construction made for innovative riding and route changes, but we live in Toronto so it was nothing we were not used to. 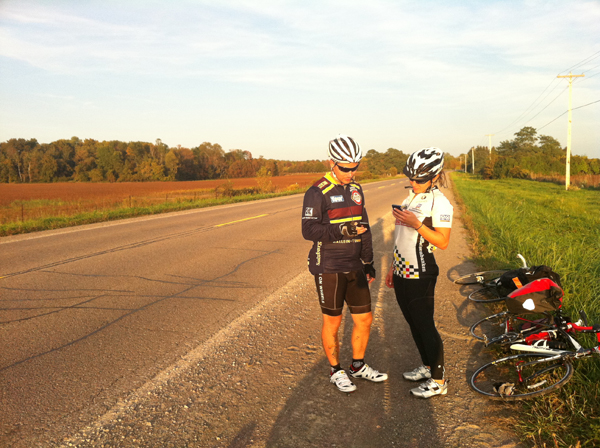 Eastview: A stretch-stop after some close calls in Kingston. Our saddle sores were becoming a major issue. It was becoming very difficult to focus on riding. Mental frustrations had me undecidedly turning my iPod on and off every 15 minutes. We were about halfway to Montreal – a fact that was both exciting, and daunting. 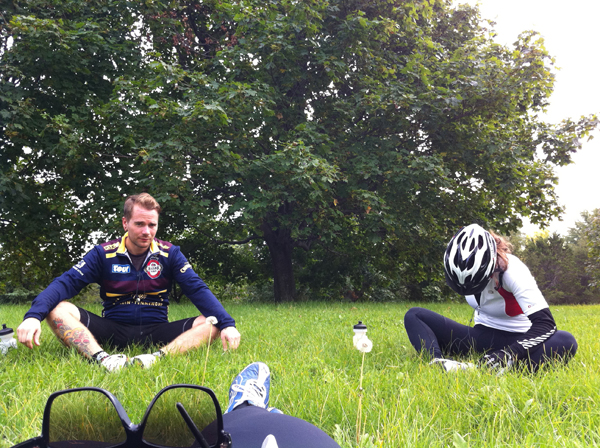 Gananoque: A really cool town. We stopped for an espresso at the Socialist Pig Coffeehouse. I rarely drink coffee, but did this time out of fear of falling behind my now ‘supercharged’ friends. I fell behind anyway because I spent the next hour stopping to go to the bathroom every 20 minutes. Cycling, amongst other activities is not allowed on King Street. We could not figure out why, and cycled through anyway. A couple in the café said they had passed us on their drive over and that we had arrived in great time – the locals were rooting for us. 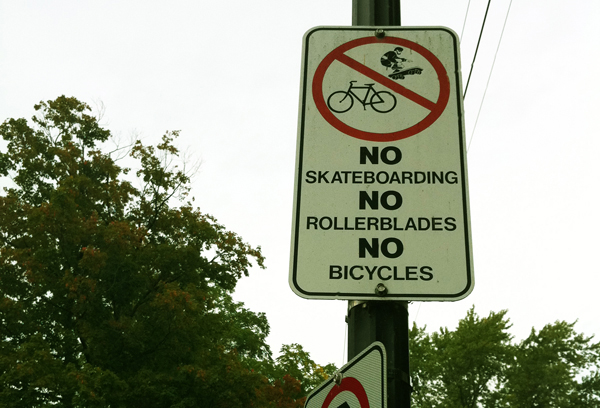 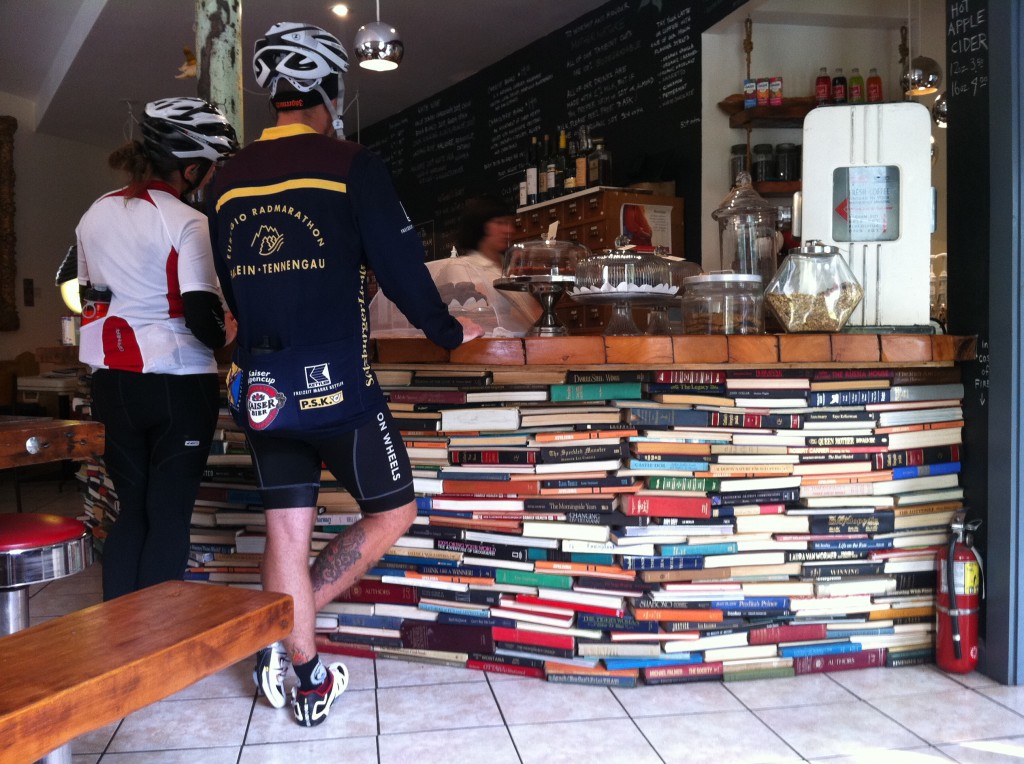 The 1000 Islands Parkway: Definitely my favourite stretch. Riding alongside water and islands makes for calm, yet engaged riding. Oblivious of the Waterfront trail on the other side of the road, we cycled alongside cars until an angry motorist honked and pointed to the trail. I’m glad he did. The comfort of a trail allowed for a greater appreciation of the sensations of the ride. I still smile when I think of the smell of the water, the hum of my tires, and the warmth of the setting sun on my black gear. Soon after, we were reacquainted with our old friend, Darkness… and destined for another very long stretch of night riding. 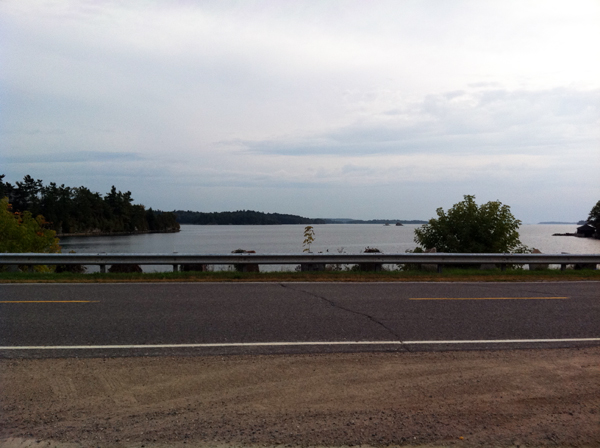 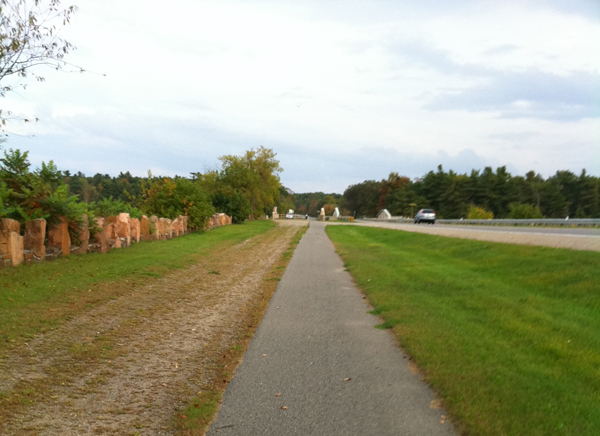 1000 Islands Parkway merger point with the 401: With darkness and signage not on our side, we missed a sharp right turn and unknowingly rode straight onto the 401, where we continued for several minutes until large sound barriers, 100km speed limit signs, and freight trucks began suggesting the situation at hand. With little option, we took the paniers off our bikes and sent them over the barriers and onto the south side, where the parallel road we should have been on was. We then followed suit (with our bodies and our bikes). To our credit, several locals later told us that it is a common mistake to merge onto the highway as a cyclist at that spot. (perhaps an area for design reconsideration) 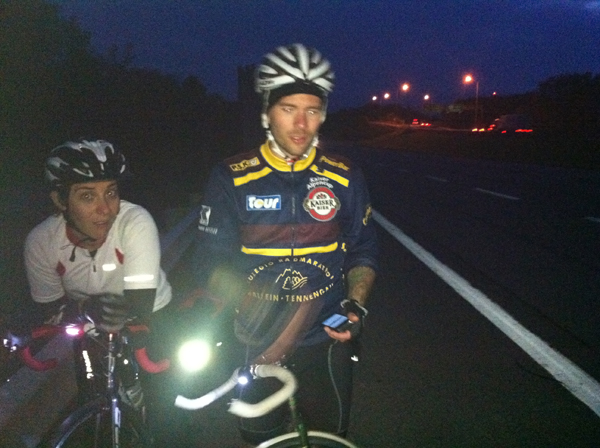 With about 35 km left of night riding, our morale was at its lowest when we hit pitch black, unpaved road for several kilometres. The entire road was under construction and we had no way of knowing how long before we would find smooth asphalt again. It was too dark to see the potholes or the (also unpaved) shoulder, so we held our handle bars tight while our wrist and saddle sores were amplified with every vibration from the road. Joanne and I continued to complain in secret about the pain and lack of circulation to our crotchulars, until JD announced his equally unbearable situation down there. From then on, there was no shame. There is no photographic record of this evening – a testament to our frustrations. We finally arrived at our B&B in Prescott at 10pm. With no food delivery available, we called a taxi to do our (now ritual) pickup and delivery routine. The cabbie we dialed said he was the only cabbie of the town and that he was 4 hours away. While I soaked my body in a bathtub, JD and Joanne rode to find dinner. 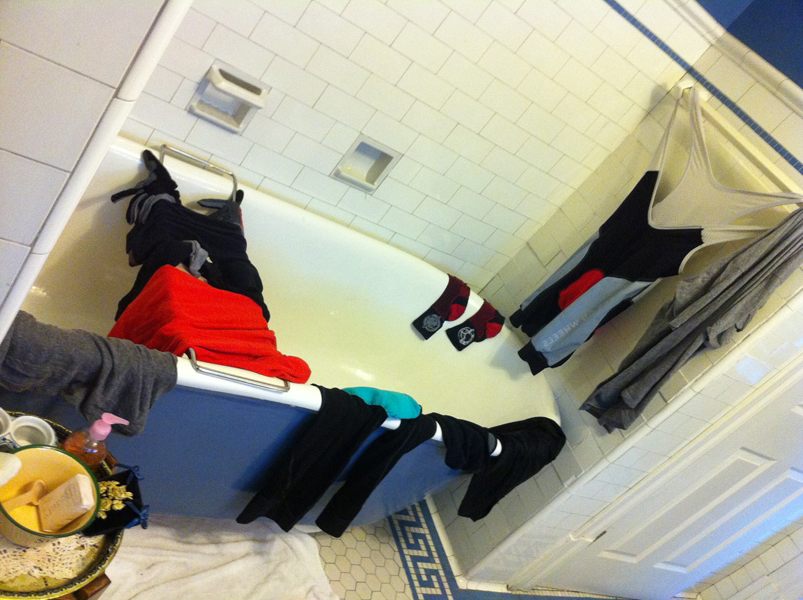