The history of Jarvis street is filled with intrigue and murder. Today, the street still faces ongoing conflict and controversy reminiscent of its creation.

Jarvis street, like so many other Canadian streets, is named after the man who originally owned the property. William Jarvis was the Provincial Secretary and Registrar of Records from 1792-1817, and he acquired the property of the modern day Jarvis street because it was granted to him upon his appointment as the first Secretary and Registrar of Upper Canada. This type of gift was a common perk among the city of York’s first officials, bestowed by Governor Simcoe in the 1790’s. Unfortunately, Jarvis was not very competent in his position, and he left his job along with a huge debt to his son Samuel.

Samuel Jarvis was able to successfully petition the Governor in Council in 1822 for some vague wrongs that he perceived were committed against his father and in compensation he received a large sum of money. From this money he built a house at the intersection of modern day Shuter and Jarvis street. This estate had hazelnut trees in front of it, which is probably the reason it was called Hazelburn, and it was built on the 100 acres of land Samuel had already received from his father. The house was described as a handsome two-storey brick house with a wide veranda, surrounded by ten acres of lawns, orchards and gardens. Today the legacy of Hazelburn continues even though the estate no longer exists, as Hazelburn is the name of a federally funded housing co-op at Jarvis and Shuter streets. 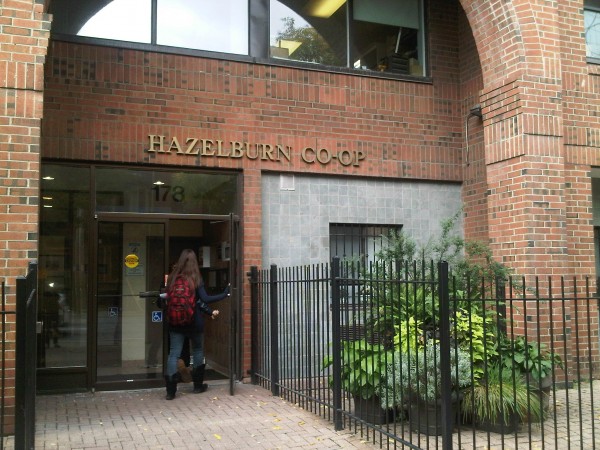 However, Samuel Jarvis did not retire to live a quiet life at his estate. When he was 25 years old, Samuel fought a duel with 18-year old John Ridout, apparently due to bad feelings between their families. The story goes that it was one of those old-fashioned duels, with pistols and pacing and firing on the count of three. Supposedly, Ridout anticipated the count of the duel and fired on two, narrowly missing Jarvis. Samuel Jarvis fired on three and killed Ridout on the spot. Despite being arrested and briefly jailed for murder, Jarvis was acquitted of all murder charges.

In the middle of all these historical conflicts pertaining to Jarvis street, lies the spirit of service of William Jarvis himself, and this reflects how modern Jarvis street has evolved to provide a variety of social services for Torontonians such as the Red Cross and the Salvation Army. Jarvis street houses a very large Red Cross building to provide community assistance and extensive housing facilities for those in need. The Jarvis street Salvation Army also adds to the communal, supportive nature of the area. Thus, in the same way that William Jarvis was rewarded for his service to Canada, modern day Jarvis street has evolved to serve the needs of Torontonians.

Other highlights of the street include the Allen Gardens, a botanical conservatory housing rare plant life from all over the world. Jarvis street also has a focus on education with the Jarvis Collegiate Institute and Ryerson University located nearby to the west. 222 Jarvis street is an interestingly designed building and one of the architectural features of the downtown. Shaped somewhat like an upside down pyramid it houses government offices that beckon to the original spirit of Jarvis himself as the city’s first Provincial Secretary; that is, in providing service to society.

Jarvis street runs into the St. Lawrence Market which is one of Toronto’s largest open concept markets where vendors sell fruits, vegetables, meats and unique goods. Next door, the St. Lawrence Hall was the main centre of civic and social life in Toronto in the late 1800’s and is protected today as a National Historical site.

Today, Jarvis street continues to evolve. In 2009, on the first anniversary of his death, a section of Upper Jarvis that houses the Rogers Communications headquarters was renamed in honour of Ted Rogers. Recently, this has been the least controversial change to happen on Jarvis street, with the bike lane controversy causing headlines and heated debates, both on and off the street.

The reasons to remove the bike lanes appear to be two-fold. Some argue that since there are bike lanes on Sherbourne street, a major artery which runs parallel to Jarvis, the bike lanes are redundant and Jarvis should be reserved for vehicular traffic only. All cyclists should be pushed onto Sherbourne street to reduce congestion on Jarvis. It is argued that it would be safer for cyclists to not be on Jarvis street and traffic would move more efficiently as drivers would not have to be concerned with looking out for cyclists. Additionally, narrowing Jarvis street to accommodate the bike lanes has done nothing to improve vehicular traffic and congestion either.

The second reason to remove the bike lanes seems to fall under Rob Ford’s broader mandate to end the war on cars.  He believes that cars should have priority and having to share the road with cyclists is simply an unnecessary burden. This push-back against cyclists on Jarvis can be seen as part of a wider city movement, with bike lane being removed on Birchmount road and Pharmacy avenue in Scarborough as well. 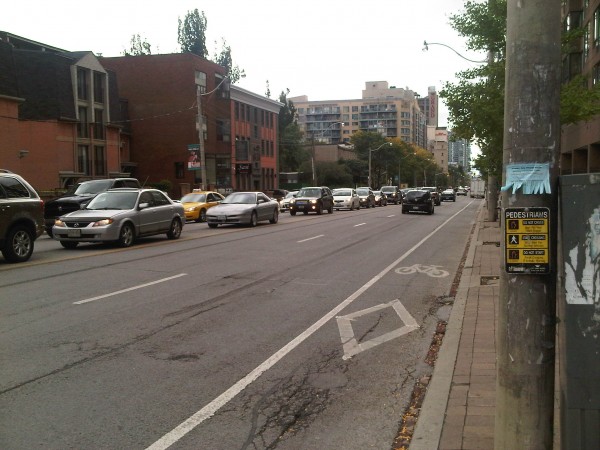 Does the resolution on bike lanes need to resort to a duel where both sides lose, including Toronto taxpayers?  The potential cost to remove the bike lanes exceeds the cost of creating them. The Jarvis bike lanes cost Toronto taxpayers $75,000 to install last year, but will cost approximately $200,000 to remove once the Sherbourne bike lanes have been completed by the end of 2012.

With Jarvis Street back in the news recently, the future of the bike lanes remains uncertain. Hopefully, all parties can find a more positive way to move forward and leave the spirit of conflict in the past for Jarvis street.