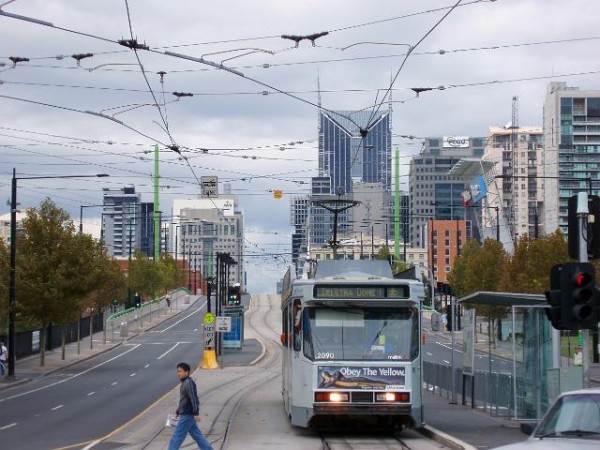 In the wake of last week’s decision to continue to build-out Toronto’s LRT plans — and since Mayor Rob Ford continues to mistakenly call any LRT project a streetcar line — Spacing will profile a handful of LRT projects from around the world that will give readers a  little better understanding of this transit option.

Last year Melbourne, Australia was ranked world’s most liveable city by the Economist. Not surprisingly, a qualifying feature of this title is the presence of an efficient transit system.

But Melbournian trams serve more than the utilitarian purpose of transporting people from A to B. Riding trams are an essential part of the city experience. Toronto take note!

Melbourne’s tram network operates in both mixed-traffic and separate ROW situations, not unlike our own. In fact about 82% of the network is either in full mixed traffic or in reserved lanes marked by a yellow line, with no physical barrier. Often, cars are permitted on the tram lane during off peak hours, easing congestion.

The tramway employs a zone fare system, with Zone 1 covering the downtown and the inner suburbs, and Zone 2 the outer suburbs. Zone boundaries overlap, and as such two-zone fare payments are rare, occurring solely when traveling completely through the other zone. A discounted “City Saver” fare is available for travel in the inner city, at $2.40 a ride.

Trams are a distinctive feature of tourism in Melbourne. The city offers a free route that runs through the downtown core during daylight hours. The City Circle Tram service operates within the central business district, passing major tourist attractions, as well as linking with other tram, train and bus routes in and around Melbourne. The vintage trams constitute some of the oldest in the city, and a recorded voice narrates the history of the buildings and locations as you pass them.

Most of Melbourne’s fleet are high-floor vehicles with steps to climb up from street level. The city has retained and re-purposed older W-class trams, and introduced new low-floor vehicles, including 36 Alstom Citadis and 59 Siemens Combino models.

Toronto is not far behind. Each year over 52 million riders board 248 streetcars and traverse 75 kilometres of track on 11 routes. We are iconic among transit fans in North America for having the continent’s most extensive streetcar system. As Spacing noted back in 2006, “with a few tweaks and a splash of creativity, our streetcar network could become, in its own way, a proud celebration of that fact.”