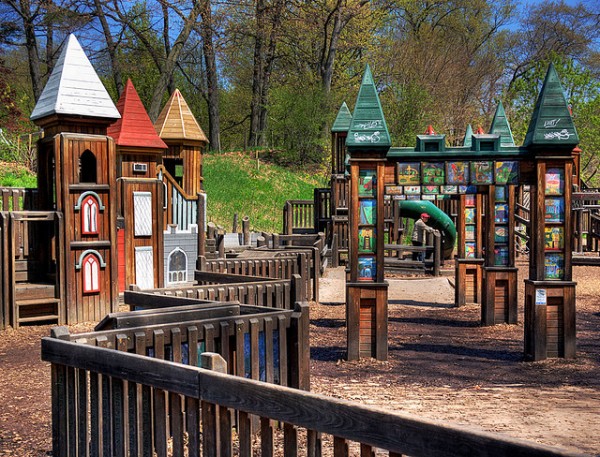 I think it must have been grade five, when, one particularly vivid afternoon, a group of gregarious grown-ups walked into my classroom at High Park Alternative School, and posed to us the ultimate question: what would your dream playground look like? I, along with the rest of my cohort of squirmy ten-year-olds, pounced on this pertinent concern with utmost diligence — deliberating the merits of monkey-bars, tire swings, and twisty slides, and working together to dream up a whimsical childhood utopia.

This was 1996, and the exercise was part of a broader community consultation process hosted by Leathers and Associates, the New York-based firm charged with the design of a new playground for High Park. We were given license every kid yearns for — no holds barred — to blueprint our ideal adventure environment. We could be as fantastical as we wanted, drafting up otherworldly contraptions fit for frolicking of the highest order. I painted a picture of a colossal trampoline, a kid suspended mid-jump above it (the kid was faceless, as I wasn’t yet confident in my ability to paint noses). My friend Nevada painted a girl diving into a giant pool of Jello. And, remarkably, our suggestions were taken seriously. So seriously, in fact, those paintings made it into the final structure — mounted into the majestic gates that lead into the labyrinth-like kingdom that finished construction two years later.

Though we didn’t know it at the time, this was a new precedent in participatory community engagement.  This was before the emergence of crowdsourcing, dotmocracy, world cafe, and other consultation models — before participation became the new paradigm in urban planning. Renowned community campaigner and Co-ordinator of the High Park Adventure Committee, Jamie Bell (after whom the playground was later named), saw an opportunity to build something generated from within the local collective. Though even he couldn’t have predicted the volume of enthusiasm this would garner — drawing some 3,000 volunteers of all ages who ultimately contributed to the design and construction of the playground.

This is probably what’s most disheartening about this weekend’s fire, which damaged a large chunk of the wooden structure (as captured on video by a local resident). So much local energy went into the construction of the adventure playground, and it has remained an iconically vibrant community hub throughout the 14 years since. It’s sad to think that one mysterious late-night arson incident could sabotage such civic camaraderie and goodwill.

Nevertheless, response to the fire has only reiterated that same sense of community morale. Already Canadian Tire has committed $50,000 to its reconstruction. But, more importantly, with local residents rallying together and Ward 13 city councillor Sarah Doucette at the helm, it’s a near guarantee that the playground’s rebuilding will bolster that same collective spirit that went into its original conception.