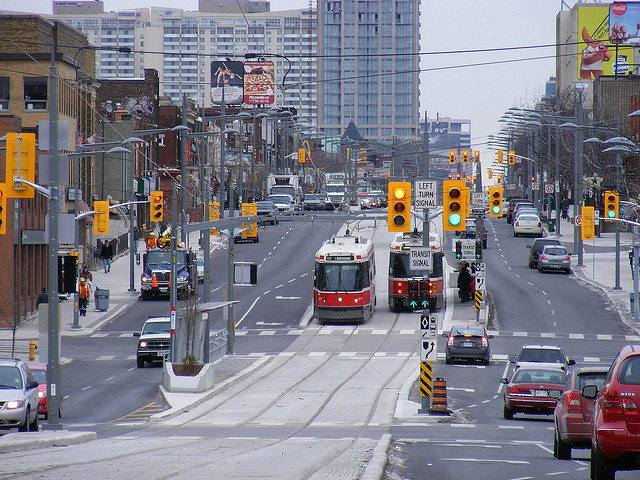 The problem with the #StClairDisaster debate, so-called, is that the extreme rhetorical polarization whipped up by the brothers Ford precludes any rational discussion about how to make practical improvements where they are warranted.

The Fords couldn’t give a damn about St. Clair — their target audience mainly lives elsewhere. But you’d think that Cesar Palacio, the local councillor, would realize his incessant carping about the alleged carnage on St. Clair is inflicting all sorts of brand harm on the retailers he purports to support. After all, he’s spent years telling their prospective customers to steer clear. At some point, it becomes a self-fulfilling prophecy (in case the Corso Italia BIA is still looking for someone to blame).

As for local drivers, Palacio and the dwindling collection of Ford allies have been conspicuously silent about how the city might make some targeted fixes to improve bottlenecks, especially on the western stretches of St. Clair. Again, the question begs: why isn’t Palacio trying to mitigate his constituents’ driving problems instead of whining ceaselessly? After all, the right-of-way ain’t going anywhere.

From what I’ve heard and observed, there are a handful of hot-spots that raise everyone’s temperature: the bottlenecks under the railway bridge near Keele, the westbound turn lanes east of Oakwood, and on the east-bound lanes between Vaughan and Bathurst. It’s also clear that parked cars pose a particular sort of impediment when they’re left on those stretches adjacent to the streetcar stops.

With some positive prodding, the City’s transportation officials could undertake a handful of focused improvements to deal with these locations:

• Impose a 24/7 ban on stopping and parking in the areas directly adjacent to streetcar stops. Those are the locations where turning buses or trucks sometimes get stuck, and where drivers are heading after making a U-turn. They also represent the zones where EMS vehicles may encounter an absolute blockage. Clear them out.

• Begin the process of developing a plan to widen St. Clair under the railway overpass east of Keele from one driving lane to two, as is the case everywhere else on this road. The City’s decision to allow the ROW to go through this bottleneck without making provisions to expand the underpass was a mistake and needs to be fixed. Joe Pantalone, lest we forget, lobbied for years to get the City to allocate capital funds to sort out the Dufferin Street jog ($40 million); this location should receive similarly close attention from a planning, engineering and budgeting perspective.

• Undertake traffic modeling studies to determine how best to address the back-ups at Oakwood (westbound) and Bathurst (eastbound). In both spots, it’s obvious that the bottlenecks are symptomatic of closely-spaced signalized intersections coupled with overly tolerant street-parking rules. In both locations, there’s plenty of nearby parking, on side streets or in parking lots. Yes, it’s great to be able to stop your car in front of the Shoppers Drug Mart at St. Clair and Bathurst. But it won’t kill anyone to park around the corner.

In the case of Oakwood, the City should acknowledge that the right-turn from St. Clair to Oakwood is part of the feeder route up to the Allen and the 401. What’s more, drivers have long been funnelled towards that intersection because of the traffic maze south of the Allen, so it is reasonable for them to expect that it works properly. Joe Mihevc in the past year or so pushed the City to add a turn lane onto the Allen from Eglinton West, thus easing a backlog that stretched all the way over to Bathurst. Palacio should press the City to ban parking on the north side of the block east of Oakwood. On balance, it is more important to allow that intersection to function smoothly than to allow cars to stop in front of the dry cleaner.

And if the merchants yelp about the loss of parking spots, as they invariably will? The City is well within its means to help them out by working with the local BIAs to provide customers with information about Green P lots or even set up a system that allows merchants to provide their customers with discounts on their parking fees, as is done in some downtown towers. After all, the city allocates funds for façade restoration in the name of local economic development. Why can’t those budgets be used to give a bit of a break to customers who drive to the area to shop?

There’s no reason I can see why these bottlenecks on St. Clair can’t be loosened up sufficiently to improve the driving experience. Which, it should be said, is the right thing to do. After all, the City shouldn’t be in the business of making life unnecessarily difficult for any resident, regardless of their mode of travel.

None of this will happen, however, until Palacio chooses to move beyond the obstructionist politics that continues to mar his approach to the main arterial running through his ward. And until he does, his name rightfully belongs on the list of those waging, ahem, a War On The Car.