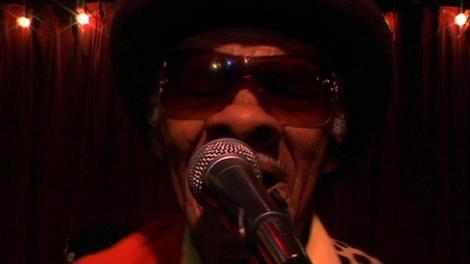 Tchoupitoulas is about what happens in a city at night: its quirks, its personalities, its sounds. It’s about what happens in New Orleans specifically, a pretty good place to explore these variables. But the excitement of the night in Tchoupitoulas is magnified by the fact that it is mostly viewed through the eyes of three young brothers who, along with their faithful pup Buttercup, have taken the ferry across from Algiers in search of adventure.  The fairly well-played out Bourbon Street nightlife (drunks, preachers, exotic dancers) is suddenly seen from a new angle – literally slightly below our eye level, and with a curiosity and excitement that can be hard for an adult to conjure, but that’s surprisingly easy to fall in with. When an evangelist speaks to the chatty, thoughtful youngest of the treasures awaiting us in heaven, there is a genuine pause for consideration. But with the loot of a street parade falling from the sky, the bare backsides in the windows, and the never-ending soundtrack of street bands and drunk revelers, it’s not hard to feel like you’re already.

Like Cinderella, the boys can only stay at the ball til midight, when the last ferry leaves. But when William, who wants to be “an NFL player, then a lawyer, then an architect,” loses his glass slipper, the brothers’ mixture of giddiness, curiosity, and bravado reaches new heights.

Tchoupitoulas is delightful. It is delightful in the way it peeks in on nightlife – on burlesque dancers, on street sweepers, on disgruntled café employees – but it is also delightful in its tone. When talking about Tchoupitoulas, the word that comes up most often from reviewers, audiences, and even the filmmakers themselves, is wonderment. This wonderment has a very specific quality – it is the wonderment of a beautiful memory. Scenes unfold as if they are being remembered; sometimes fuzzy, sometimes in flashes, sometimes with the sounds of the street, or a funny detail of a sign, coming to the centre of our attention.

Tchoupitoulas screens tomorrow (Monday, April 30) at the Isabel Bader theatre (free for students and seniors!) and Saturday, May 5 at the TIFF Bell Lightbox.