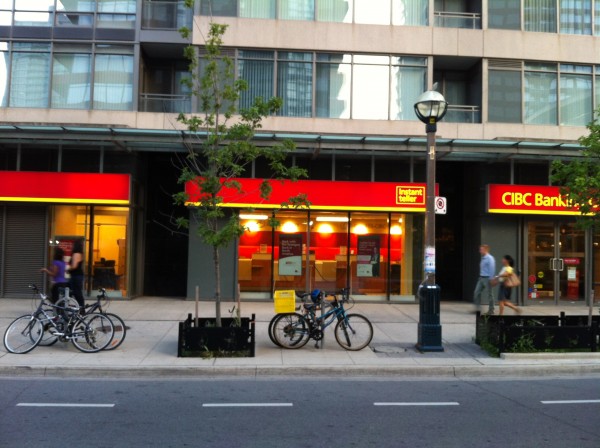 Last week, the mainstream media awoke to the fact that it’s not just knee-jerk NIMBY reactions driving Torontonians to fight new condo developments. It’s the banal podiums, those first few stories of big-box banks, pharmacies and chain retail stores that are the pièce de résistance of new condos in the city. (Spacing‘s Shawn Micallef also wrote about this last week in his Toronto Star column).

While urban designers have been saying this for a while now, little attention has been given to why big boxes, banks and chain retail are the developer’s ground floor tenants of choice. Or for that matter how this could be changed. I’ll start this post by trying to explain why this is happening across the city and then highlight a few ways we could address the problem.

Toronto’s current zoning requires most new residential developments, particularly those on main streets, to be mixed use i.e. to have commercial tenants on the ground floor. The City’s Avenue plans then try to tweak these requirements with setback and height regulations so new buildings will match the existing character of the main streets they will inhabit.

These regulations make their impact far before the condo is even built. To get a development constructed takes loans, and banks (particularly in Canada) won’t provide construction loans until enough units have been sold. In financing, these sales are reflected as a cash flow the bank can measure to decide whether they believe the developer can make enough income on the project to pay off the loan. Locking down commercial tenants in those large podiums therefore becomes a key part of the cash flow equation.

But commercial tenants, unlike condo owners, are essentially renters. They sign on for limited time periods and, crucially, often depend on the success of their business to pay the rent. As a result, rather than find lots of small independent businesses to fill their podiums, developers look for the safest tenants willing to occupy large floor plates for a long period of time. Goodbye mom-and-pop shop, hello Shoppers Drug Mart. In other words, form follows finance.

The irony of this is that having many smaller tenants rather than a couple large big box chains or banks would probably make a developer (and municipalities) more money. But to banks — and to some extent developers — this is riskier than landing a couple deep-pocketed tenants who will pay lower rent on large spaces but have little chance of closing down unexpectedly (unlike new restaurants, 60% of which fail in their first year), forcing the developer to scramble to fill the space.

This is the sad reality that is suburban-izing many of Toronto’s downtown streets. In essence, form follows finance.

There are a few options for combating this problem:

1. Do nothing – As Jane Jacobs famously said, “old ideas can use new buildings, but new ideas need old buildings.” In other words, we could just wait a while. Look at some of the older condo buildings along the waterfront and you’ll generally see a diversity of smaller chain stores. This may not satisfy the Ossington crowd, but its better than sterile banks and drug stores.

There are also signs that developers might just realize that it pays to have interesting tenants. Five St. Joseph is the best example of a condo project actively marketing the fact that it’s keeping its small storefronts. Up market projects like the Shangri-La or Four Seasons aggressively seek out ritzy tenants to give their tower the glamour needed to sell $28 million condos. Finally, developers are starting to take notice of the Distillery Districts and DUMBOs that subsidize a menu of galleries, shops and restaurants to create the street life that sells a lifestyle as much as it sells condos.

2. Do something – New York City has taken the lead in actively regulating the size and location of commercial stores on streets through zoning. This happened first on Harlem’s 125th Street, where new banks were relegated to the second floor of buildings. More recently, City Council has gone one step further, passing new zoning in the Upper West Side that also limits the width of storefronts. It’s unclear whether this will return either neighbourhood to their formerly messy glory, but it’s a start.

3. Compromise – Move away from the mixed-use podium paradigm that forces developers to provide banal retail and instead have them build family-sized townhouses free of use regulations. After all, the buildings found on Toronto’s beloved main streets were originally built for (and often by) families to live in. They were the building blocks from which small businesses sprung.

The City of Toronto is already trying to get more family-sized units included in new condo developments and allowing families to rent out the first floor of their townhouse to businesses could make these units more affordable. This is already happening in CityPlace and Queen Street West condos, where small businesses are springing up in the townhouses built at the bases of new towers. 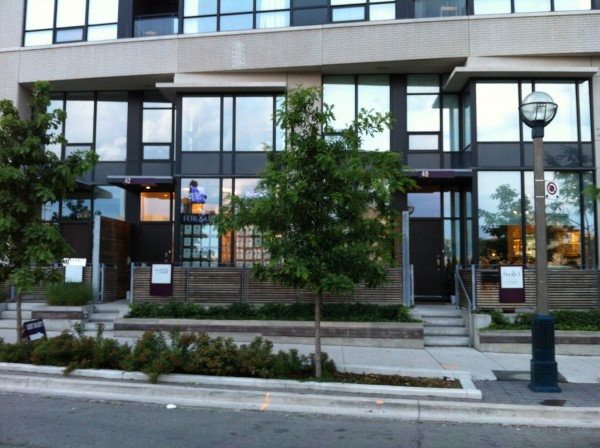 A real estate agency, hair salon and other small businesses in townhouses at CityPlace

There’s no guarantee these ideas will lead to the kind of neighbourhoods many of us want to live in. In the end, it’s high rent that is driving independent businesses from the downtown; case in point, the plethora of family-owned ethnic restaurants found cheek-by-jowl in Toronto’s suburban strip-malls and food courts.

The key is to avoid the griping about big boxes and banks that can be dismissively shrugged off like so many other “first world problems.” After all, many neighbourhoods need more banks and drugstores. But Toronto’s downtown also has needs: family-sized units, affordable housing and gathering spaces to tie communities together. These needs shouldn’t be trumped by design imperatives for flush streetwalls and matching setback heights.

What’s clear is the status quo isn’t working, and while patience is the name of the game in real estate, better retail, and therefore more walkable streets, couldn’t come sooner.