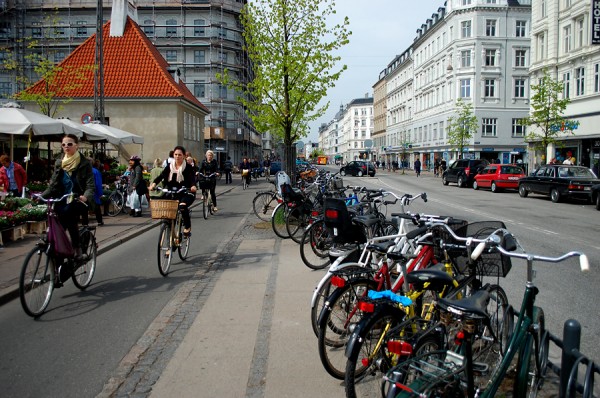 The Toronto Coalition for Active Transportation (TCAT) has launched a nationwide campaign that promotes cities to adopt “complete streets” policies. Spacing’s Matthew Blackett sat down with Ryan Whitney, Researcher and Project Manager for TCAT, to quiz him about the merits and challenges of implementing complete streets.

SPACING: Why are complete streets needed in Canadian cities?

WHITNEY: Canadian cities have committed a disproportionate amount of space to the automobile. Complete Streets, which ensure that our streets are built for pedestrians, cyclists, transit users, and drivers of all ages and abilities, can help make our streets more efficient for everyone. A Complete Streets policy ensures that whenever a street is built, retrofitted, or repaired it is designed for all road users with the ultimate goal being to create an entire network of more equitable and accessible streets.

In practice, Complete Streets are context-sensitive and there is no cookie cutter formula but improvements could include adding wider sidewalks, a bike lane, or a dedicated bus lane to a given street, depending on the surrounding urban context. Complete Streets may also include smaller changes such as pedestrian signal timing that makes it easier for the elderly to cross the road, adding sheltered bus stops, or adding trees to make a street more pleasant to walk on.

Why did TCAT decide to go national with a complete streets campaign?

Even in the early days in 2009 when TCAT started working on this issue with Cycle Toronto (then the Toronto Cyclists Union), TCAT has been interested in developing a Canadian parallel to what the Complete Streets Coalition has accomplished in the U.S. We identified that there is a real need for Canadian-specific Complete Streets examples, case studies, and resources that will help municipalities across the country adopt and implement Complete Streets.

Funding from the Ontario Trillium Foundation has allowed us to concentrate our initial efforts in Ontario to develop resources and measure interest.  However, early into this process it became clear that there was significant interest in Complete Streets across the country and we started receiving great case studies, progress updates, and resources from other parts of Canada. As a result, the Complete Streets for Canada website (www.completestreetsforcanada.ca) has already grown beyond the Ontario context. We still have a long way to go to build up resources and tools for every province but we’re happy with the progress we’ve made so far.

Which Canadian cities are experimenting or moving forward with complete streets?

The City of Waterloo and the City of Calgary were the first Canadian cities to adopt Complete Streets policies (in 2011 and 2009 respectively). There are also a number of other communities that are considering a Complete Streets policy including Winnipeg, Moncton, Charlottetown, and Edmonton. Others are already using the term in official planning documents but have yet to adopt an official policy including St. Catharines, Mississauga, Hamilton, Peterborough, Thunder Bay, Sudbury, and London.

Most communities across the country are already changing their streets to make them more complete by dedicating more space to pedestrians, cyclists, and transit users. Cities are doing this in a variety of ways including closing key streets to automobiles and opening them to pedestrians, adding more space for on-street cyclists, and improving the pedestrian environment. Few communities, however, are applying a Complete Streets approach to every road project. What we want is for Complete Streets to be part of the planning culture and applied to every project.

These ideas are not new as Canadian municipalities have been promoting innovative mobility strategies for decades. For example, Montreal has had segregated bike lanes since the early 1970s. Ottawa has been holding summer Sunday Bikedays since 1970 where several of the City’s parkways are closed to traffic and open to cyclists and pedestrians. Toronto installed its first bike lane in 1979 and added other lanes in the early 1990s.

Which cities from around the world can we look at to find complete streets in action?

In the United States, cities ranging in size from Charlotte, NC to Chicago to Topeka, KS have all been applying Complete Streets principles to make their streets more equitable for all users.

Globally, there is a massive amount of work happening in cities of all sizes so it comes down to the type of examples you are looking for. In South America, Medellín and Buenos Aires are pushing forward with a combination of initiatives related to transit, pedestrians, and the cycling network; Europe has the high-profile cycling culture examples of Copenhagen, Amsterdam, and, more recently, Seville, but cities of all sizes on the continent are continuing to move towards creating streets for all users; Sydney has recently introduced an entire network of segregated bike lanes. I could go on and on…

How do you convince drivers that dedicating more road space to transit, bikes, and pedestrians is good for them as well?

It has to do with how Complete Streets are framed by the media and decision-makers. Nobody is aiming to ‘take away’ space for cars with the goal of making drivers more miserable and our streets more congested. What we are trying to do is balance the system to give people the infrastructure, comfort, and convenience needed to cycle, walk, and take transit more often. Framing these changes as giving space to one user at the expense of another is counterproductive as Complete Streets work well for everyone, including drivers.

This idea is not new and we have local data to prove the value of Complete Streets to all users.

In Toronto, St. George Street has been one of the best examples of a Complete Street since it was redesigned in 1997.  Four traffic lanes were reduced to two, sidewalks were widened, bike lanes were added on each side of the street, along with greenery and street trees. The result? Speeding was reduced, traffic collisions decreased, and cycling volumes increased with no change in traffic volume. These outcomes are great for drivers, too. Our congestion issues will not be solved without giving people more options for how they get around.

Opponents of Complete Streets view it as part of the “War on the Car”. Are complete streets policies meant to punish drivers?

There is no ‘war on the car’ and nobody is aiming to punish drivers. Complete Streets policies are designed to benefit everyone, including drivers. If there are more people cycling, walking, and taking transit there will be less congestion. If our streets are designed for all users they will be safer and reduce collisions between cars and other users.

What are the benefits for retail stores in the complete streets design theory?

The more people that can access your store the more opportunities you have to do business. A vibrant, multi-modal streetscape supports business more often than not.  Complete Streets ensure that more people can access businesses by a variety of modes.

For example, TCAT completed two research reports in Toronto, the first in 2009 on Bloor Street in the Annex and the other in 2010 in Bloor West Village. The research, titled “Bike Lanes, On-Street Parking and Business” found that the majority of people (90% in the Annex and 80% in Bloor West Village) do not drive to shop on Bloor Street and that cyclists, pedestrians, and transit users visit more often and report spending more money than those who drive ( http://www.tcat.ca/node/1525).

Complete Streets contribute to a healthier lifestyle, data has shown. How do you convince people of the long-term gains of Complete Streets when short term gains (like getting out of a traffic jam) is at top of mind?

Any conversation about Complete Streets is context specific. In downtown Toronto, for example, many people already walk to buy groceries, to go to work, or to visit friends, making the benefits of Complete Streets more apparent.

People from all over the country express a desire to walk, cycle, and take transit more. However, in many suburban or small to mid-sized Canadian cities or towns, there is generally not a strong walking or cycling culture and transit coverage is often insufficient and infrequent. As such, it’s very difficult for people to visualize how Complete Streets would transform their community or why people would choose to walk, cycle, or ride transit if everyone who can afford to drive already does so. This is one of the reasons TCAT developed a resource called Complete Streets by Design (http://www.tcat.ca/completestreetsbydesign) to help people imagine what Complete Streets could look like.

Across the Greater Toronto Area we simply can no longer afford to ignore the need for Complete Streets and this should be the starting dialogue for any conversation on the topic. With congestion and conflicts between users becoming more frequent and cities around the world surpassing us with their Complete Streets investments, we need to act now to set-the-stage for long-term change.

Complete Streets are not just a downtown concept. We need to steer the dialogue away from left versus right or urban versus suburban because Complete Streets will look, act, and feel different in each context but still provide comprehensive and multi-modal options for all users.

We all want our communities, our cities, and our towns to be better places to live, work, and play. Complete Streets can help us do that.