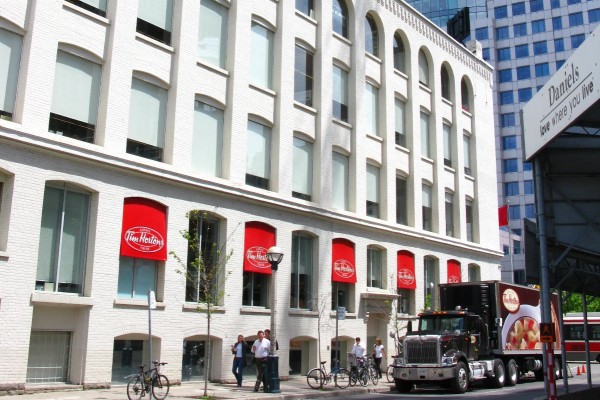 Catherine Nasmith is former president of the Architectural Conservancy of Ontario and a founder of Doors Open Toronto. She has been active in heritage preservation for decades including campaigns to save the Don Jail and Fort York. Recently, a proposal has been put forward to demolish designated heritage properties at 274, 276, 284, and 322 King Street West in favour of a new Frank Gehry-designed development containing residences, an art gallery, and a new campus for OCAD University. Spacing sat down with Catherine to get a heritage preservationist’s perspective on the proposed plan and to discuss heritage preservation more generally.

Spacing: How would you rank Ontario’s present heritage preservation legislation, The Ontario Heritage Act, in terms of its comprehensiveness and effectiveness?

Nasmith: The legislation is actually pretty good. It could use improvement in small ways but essentially Ontario municipalities have the necessary tools to protect heritage. We’re not seeing strong protection because municipalities aren’t applying the resources to do the job properly. The municipal body responsible for heritage conservation in Toronto, Heritage Preservation Services, for instance, is just hopelessly under-resourced and the pace of development in this city is overwhelming them.

Spacing: How would you improve the act or enhance its enforcement?

Nasmith: I think it would be great if citizens could launch appeals when municipal councils make bad decisions. Using David Mirvish’s proposal for King and John as a case study, a number of buildings on that block are designated heritage properties. These are designations Mirvish agreed to and City Council has passed resolutions confirming their protection. Mirvish now has to apply to City Council to demolish these buildings. If City Council refuses, he can apply to the Ontario Municipal Board (OMB) to have the decision overturned. However, if he’s successful in persuading Council, you and I as citizens do not have the same power to appeal City Council’s decision to the OMB. As the legislation is structured, only the property owner can state an appeal. The preservation world cannot appeal what they view as a poor decision on preservation by municipal council.

I would also like to see the act strengthened as far as owner responsibilities. Pressure could be taken off City staff if developers were required to submit a “heritage impact assessment” as part of their proposal package. Right now, it falls to municipal staff to do much of the basic research and there’s simply not enough staff to do it. Further, developers are required to report the number of trees on their property, but are not required to do a scan of heritage elements; it’s a bit hypocritical on the City’s part.

At the municipal, provincial, and national level, we fail to offer enough financial incentives to property owners. American cities are much better equipped in this regard, such that federal and state governments offer substantial tax rebates and grants in exchange for heritage preservation. It’s the same in Britain: property owners are partners in protecting the public interest. There should be a real quid pro quo. In Canada, only municipalities offer small incentives and the bureaucracy to get them is overwhelming.

Spacing: Can you explain the difference between a “listed” heritage property and a “designated” one?

Nasmith: The definition is available on the city’s website but briefly, designation is the final stage when a building is protected from demolition. It’s been identified and is protected by Ontario Law. “Listing” identifies a building as one the City is interested in designating but hasn’t yet had the time or the resources to process it. John Sewell invented this system right here in Toronto.

Spacing: Has a property designated or listed under The Ontario Heritage Act ever been demolished?

Nasmith: Thousands. Only since 2005, when the Heritage Act was updated, have we had the ability to stop demolition. Recently, two modernist structures that were really close to my heart —The Bata Shoe Building and Inn on the Park—were demolished. Both buildings were listed and identified as very significant representations of the modern movement. The City, however, refused to designate. It could have stepped in and forced the property owners to work within the structures, i.e. adapt or reuse, but it did not. Since 2005, not many designated buildings in Toronto have been demolished but I think that the King Street proposal is going to test the will of council.

Spacing: How do you respond to the argument that King West buildings are not of exceptional heritage value?  How do we measure what constitutes “heritage”?

Nasmith: The criteria are outlined in The Ontario Heritage Act. There’s no such thing as exceptional heritage or just a little bit of value. That perspective is kind of a Noah’s Ark approach to heritage conservation. It suggests that we can let them all go, as long as we keep the last one.

The King Street properties were built at different times but collectively they constitute a wonderful, historic street-scape.  As a heritage conservationist, you’re trying to protect a sense of place and the best work of every generation. I see a project coming in from Gehry and Mirvish as being a positive thing, but shouldn’t we be directing that energy towards some location that is not developed at the moment so that we keep what we already have?

Spacing: Possibly, but the counter-argument is that Mirvish owns those properties and would naturally build there?

Nasmith: At one point, the area around Fort York was slated for serious development that would have compromised public access to the Fort. Developers defended their proposals by insisting that it was their property to build on as they pleased. Citizens got angry and established the organization Friends of Fort York. The City eventually became involved, a provincial facilitator was invited in, and meetings were held where plans were reworked.  The City gave parcels of land in the railways lands to developers in order to acquire property that was in the public interest. The same thing happened with the tower that was proposed to go up behind St. James Cathedral. It would have ruined a heritage vista, so negotiations were held and the building was moved across the street. There’s a history of the City saying, “we like your development idea –just not here.” Through various planning processes and land exchange, the City has the power to negotiate a compromise.

Spacing: Do you believe this should be a possibility with the Gehry development?

Nasmith: It makes sense to me. Why tear down perfectly good building stock? You have to wonder how solid the proposal is if it depends on 80-storey condos to be financially viable. It may twist itself into the ground as a pipe dream, but that may not happen until the heritage buildings are gone.

Spacing: Frank Gehry is a world-renowned architect. Do you believe that there are acceptable tradeoffs? Perhaps it’s acceptable to demolish these particular structures because of what Toronto gets in return?

Nasmith: Your proposition is a Hobson’s choice. Why not have both? Build the great project where it has room to be the great project and without having to sacrifice something that’s already nice and valuable. We’ve already identified these buildings as important through heritage processes with Mirvish’s consent. He wasn’t at any of the preservation board meetings saying, “I don’t want my property designated.” He recognizes the value so I don’t know what’s changed. David Mirvish was also the first honorary chair of Doors Open Toronto and he’s been very active in heritage preservation his entire career by reusing and recycling buildings.

Spacing: Are you involved in any other heritage preservation projects right now?

Nasmith: At the moment, we’re trying to get York Square protected. It’s at the corner of Yorkville and Avenue Road. You’ll probably recognize it as the Vidal Sasoon Academy. In the 1960’s, when everyone was doing what Mirvish is proposing — razing old buildings and consuming whole city blocks with new massive structures — architects Jack Diamond and Barton Myers were taking historic buildings, like York Square, and adding to them. They designed a little courtyard and found some really hip people to rent the suites. It’s an early example of adaptive reuse. This was done before there was any Heritage Act. It was done because of the attitude of Diamond-Myers and the culture that began to develop with Jane Jacobs arriving in Toronto. York Square received ten pages in Progressive Architecture and it was publicized in Japan, France, Germany, and Australia. Along with Diamond’s Dundas-Sherbourne complex, it became a symbol that something was happening in our city. At the moment, however, York Square is not protected: there’s a proposal for a 40-storey tower for the site. The potential demolition of York Square is indicative of how times are changing. In the 1960’s, people were thinking about how to make good pieces of city. I think we’re beginning to move away from that again, we’re losing our ability to work in smaller scale and with finer detail.