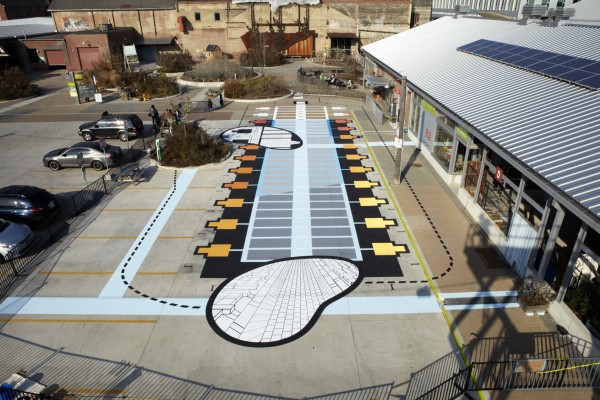 At the Evergreen Brick Works more than 40-million bricks a year were produced, bricks that helped define much of Toronto’s skyline. Now, to commemorate the underground kilns local artist Dan Bergeron has teamed up with Paul Aloisi to create the above parking lot mural. Directly beneath the parking lot are the Evergreen Brick Works’ ghost kilns. Now they have been brought back to life, brought up to the surface, in this art installation.

Recently Spacing asked Dan Bergeron to share some of the went on behind the scenes.

Spacing: How did this project come to be?

We had plenty of help to complete the painting from a group of volunteer assistants that we connected with through Evergreen and OCAD, where Paul teaches. They all deserve a pat on the back and a stiff drink for their efforts. Out of this crew, we are largely indebted to Bill Wilson, frequent volunteer at Evergreen, who worked with us almost everyday to help get the project completed. Paul and I probably each spent close to 300 hours on the project over the course of 11 weeks. The planning was pretty intense and there was a lot of AutoCAD work to size the painting into the parking lot and figure out all of the stencils. Plus the painting itself took a while to complete because of it’s scale.

The biggest supporter of the project was the City of Toronto and their StArt Street Art Toronto funding initiative. Lilie Zendel and her team have wisely been using city money to fund projects across the city that are trying to capture the attention of Torontonians and visitors alike. Without that funding this project would never have happened.

Spacing: You have essentially turned a parking lot into a work of art. Can you speak about turning public space into an art space?

Bergeron: Creating art for public spaces is a lot of fun. There is the child-like aspect of getting to re-imagine a space, where you are allowed, encouraged even, to create works that are fanciful, humourous or what have you. And then for most of the projects that I work on, there is also the human aspect. You get to consult with the community where the work will reside and attempt to include them in the creative process, and as I use photography often, in the work itself. I like this because I get to be on the ground level of things and meet people and hear their stories.

Spacing: In this case, your audience is literally immersed in art. How do people react to this? Are they afraid to step on it? Have you had feedback from people? How did knowing that people would be walking/driving over your art inform the process?

Bergeron: Most of the people that we encountered while we were working were very interested in what we were doing. And once we explained the meaning behind the work they became quite intrigued. It will be great once there is an info panel up to explain the concept behind the piece. In terms of walking on it – that was a little hard to get over at first, but the painting is on the ground so what are you going to do. What will really test the piece however is that fact that cars can drive on it as it’s in a parking lot. And it was this driving in the parking lot that influenced us most in the creation. This can be seen in our layout and choice of design and placement of the upper blob (black and white stencil of the detail of the foundation’s brickwork). It’s layout goes with the flow of the traffic through that portion of the parking lot.

Spacing: Why aren’t we doing this sort of thing all over the city?

Bergeron: There is more and more of this happening in the city for sure. The biggest hurdle to complete projects of this nature is funding and property owners being open to the grand possibilities of public art.

Spacing: Do you have future projects in the works?

Bergeron: I’ve got a bunch of projects lined up for next year. A permanent public work in Regent Park, a photo-based installation on Bonaventure Island in Gaspé, Quebec, a permanent work in Chinatown and some other sprinkles that I want to keep secret for now. And Paul is designing the consultation booths for IDS in January. And together hopefully another large painting that reflects the interior of a building or what lies beneath our feet. We want to push this idea and body of work for sure.

Beneath are two helicopter photos of the underground kilns. 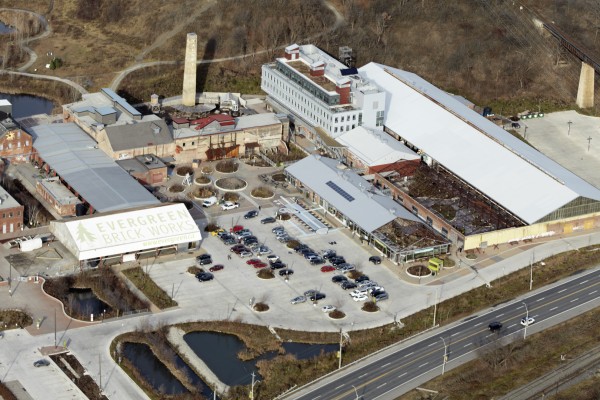 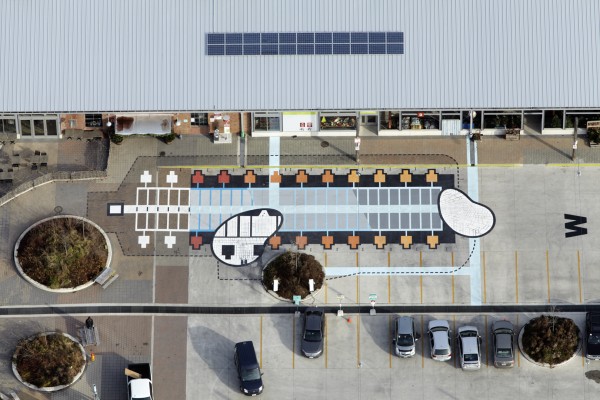