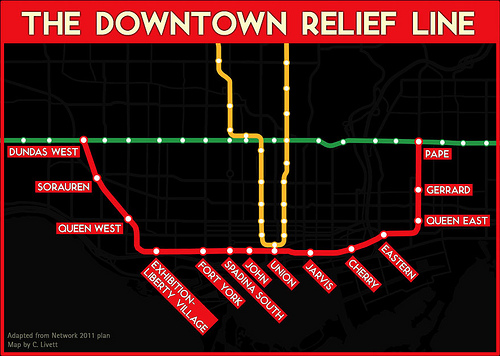 Here’s a quirky coincidence: The future of the Downtown Relief Line (DRL) rests, at the moment, in the hands of six women — three politicians and three senior civil servants.

On the decision-making side, we have TTC chair Karen Stintz, as well as the newly-minted premier Kathleen Wynne and NDP leader Andrea Horvath, who appears to be holding the keys to the Liberals’ tentative hold on power.

On the bureaucratic side sits the city’s new chief planner Jennifer Keesmaat, who has come out swinging on the transit file, as well as two top officials at the TTC and Metrolinx — respectively, Anna Pace, director of strategic partnerships, and Leslie Woo, vice-president planning and policy. (The latter two have extensive experience in long-range planning and inter-governmental relations.)

First, I’ve attended enough transit planning panel discussions and meetings to say with some confidence that the attendees typically skew male, and sometimes quite conspicuously so. So the fact that there are so many senior women driving the conversation is certainly anomalous.

Second, to the extent that women may be inclined towards a less confrontational form of politics, this gender alignment could, in theory, have a great deal of significance in the evolution of the debate over this long-overdue (first bruited in 1985) expansion of the subway system.

The reason, quite simply, is that while the TTC/City of Toronto and Metrolinx both say they favour a DRL and see it as a high priority project, the two institutions at present have distinctly different visions for the alignment of this new line, as well as its raison d’etre.

The TTC, last fall, unveiled the Downtown Relief Transit Expansion Study to scope out the alignment of a proposed downtown relief line, to run in a broad U south from the Bloor and Danforth lines and intersecting with the Yonge-University loop. It could also include an extension up to Don Mills and Eglinton. According to Pace, the TTC is now gearing up for an accelerated environmental assessment on the proposed line, which will be completed later in the year or early 2014.

Metrolinx, also last fall, revealed that it had decided to accelerate plans to build a downtown relief line, as well as the extension of the Yonge subway up to Richmond Hill. But when the agency — which is investigating options for dealing with post-2025 overcrowding at Union Station — talks about a DRL, it has something quite different in mind than the TTC does.

As this fact sheet indicates, the route might head to the CNE, as suggested in a Metrolinx study proposing a connection between a DRL and a new GO commuter rail station near Front and Bathurst (see page 12 in this report). Whatever the alignment, the new line could serve 107 million riders by 2031, says Metrolinx, which is also looking at expanding GO service along Lakeshore as means of relieving crowding on the Yonge-University-Spadina line.

Both agencies are now proceeding with their own technical analyses, and everyone, of course, is waiting with baited breath for looming political decisions about the funding of such projects, as well as others across the GTA.

The question is whether these apparently parallel planning processes will converge, and if so, how and when. I asked Stintz, Pace, Keesmaat and Woo (via a Metrolinx spokesperson) this question and they all insisted that the two agencies are well aware of what the other is doing. Pace described the planning as “complementary” and underscored the fact that it is actually underway. “I’m feeling more confident than I was in the past because a lot of work is being done.”

“The City and Metrolinx work is not far apart,” stresses Woo, who adds that the TTC, Metrolinx and the City of Toronto have agreed to produce over the next 12 to 18 months a much more granular analysis of a proposed line, with an eye to ensuring that downtown capacity is met, the region-wide impact is “positive” and that the Yonge north expansion can be built without overwhelming the downtown portion of the subway system.

“Our understanding is that Metrolinx will work collaboratively with the local municipalities,” adds Keesmaat, who expects the Feeling Congested consultation to lead to a fall report linking future funding tools and future TTC expansion plans. But, she concedes, “We’re fully aware that we’re running on parallel tracks. We’re trying to talk as much as possible. Are we there yet? Absolutely not.”

How this all gets resolved is by no means clear; indeed, much will depend not just on new funding, but where exactly the money comes from. Stintz argues that the City of Toronto has to establish its own revenue tools if it wants to influence the outcome of what eventually gets built. Metrolinx, in turn, will release its investment strategy and revenue tool recommendations in late May, but the ultimate decision rests with the provincial cabinet. And don’t forget the Harper government, which will likely be unveiling new federal infrastructure program in a month or two.

Wynne, lest anyone forget, cut her teeth in politics in the mid-1990s, with John Sewell’s Citizens for Local Democracy group, which espoused the importance of municipal decision-making in the face of unwelcome edicts from the Pink Palace.

But it remains to be seen whether she’s around to make this call, and whether she’ll be able to encourage the City/TTC and Metrolinx to hammer out a genuine consensus.

The broader point, however, is that transit users in Toronto, as well as those in the 905 who come downtown, want policy-makers to serve up a single, well-constructed solution, not two that appear to be in conflict with one another and set the stage for more years of political brinksmanship.

At the moment, two sets of planners are working on two sets of plans to solve one murderously difficult transportation problem, and no one knows who’s going to pay the bill. It’s tough to imagine a better time for a collaborative approach.