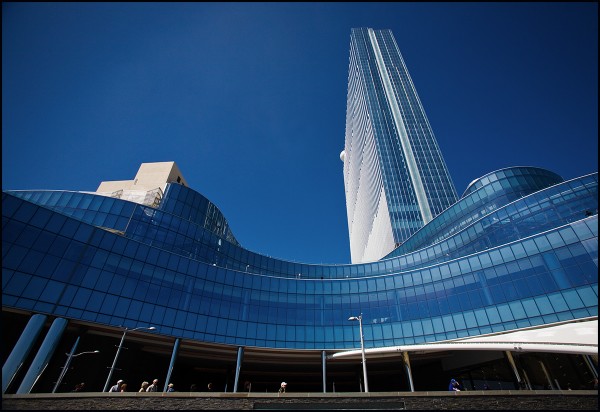 The Revel Casino in Atlantic City

Late last week, City officials announced that the release of the casino report long expected to be tabled to the executive committee next week, will be delayed, pending requests for more information from Ontario Lottery & Gaming Corp.

Spokesperson Jackie de Souza told me yesterday that the request “relates to the two zones being considered for the location of a potential casino.” But she declined to respond when I asked if the City had asked OLG to provide specifics about the hosting fee — a strangely illusive number the City’s own consultants have estimated to be anywhere from $18 to $168 million, depending on about a thousand factors, not least of which is the proposed facility’s actual revenues.

Earlier this winter, Paul Godfrey, OLG’s chair, hinted to me that the agency may release a new hosting fee formula prior to the council debate. (Regardless of the quantum, Doug Ford already has his paws on the pot and says the City should use the proceed for transit.)

But here’s another question: What if we build it and they (i.e., high rollers, jet-setters, the Casino Rama crowd, and other sundry saviors) don’t come? Put another way: if the tourists don’t materialize, do we have to settle for a piddling fee, or something worse?

While Casino Windsor and other OLG properties have seen declining revenues in recent years, the debate about a new Toronto casino rarely strays into a discussion of what happens if this extravagant development fails commercially.

Yet contrary to popular mythology, casinos do fail. Exhibit A: Atlantic City’s Revel, a $2.5 billion integrated casino-resort that will be filing for bankruptcy protection some time this month.

A bit of background: Atlantic City was the original destination of choice for gamblers, but lost its pre-eminence to Nevada in the 1950s. In more recent years, the Boardwalk has seen traffic ebb as casino-goers flock to Pennsylvania.

In the heady mid-2000s, according to the Wall Street Journal, a few leading investment banks began to sink huge sums in casino projects, with Morgan Stanley taking the most aggressive approach to a sector that was seen to have much break-out potential. Among its bets: minority stakes in casinos in Atlantic City and Gettysburg, Pennsylvania, as well as a piece of Trump Resorts.

In 2006, Morgan bought a large stake in the Revel Entertainment Group, founded by Kevin DeSanctis, a long-time casino executive. The partners began developing what would become a giant casino-hotel complex on a 20-acre beachfront site. The 150,000 sq.-ft complex would have 1,900 hotel rooms, restaurants, shops and entertainment venues. (You’ve heard this story before.)

On the eve of the 2008 credit crisis, several new Atlantic City casinos were poised for development, even though gaming revenue had showed a first-ever drop of 5.7%, according New Jersey statistics quoted in a July, 2008, report in the WSJ.

Before long, most of those Atlantic City projects were on ice. Revel was having trouble raising funds to complete the project. And Morgan, the major investor, was facing dire problems elsewhere in its commercial real estate portfolio.

In September, 2009, WSJ reported that a state-owned Chinese construction company had anted up $1.7 billion in financing to complete Revel:

“Due to the recession,” according to WSJ, “the Revel slowed the project’s pace last year and halted all but exterior work on the ocean-themed casino, hotel and restaurants, originally valued at $2 billion. Hundreds of construction workers were laid off in January. The project is considered to be too far along to abandon, and many local officials feel it could be the most important factor in reversing a three-year economic slump in Atlantic City…” [my emphasis added]

By early 2010, Revel had become embroiled in a fight with UNITE-HERE, the hotel workers union, as it sought $260 million in controversial state tax reimbursements to help close the lingering financing gap. WSJ reporter Alexandra Berzon pointed that Revel and other backers had positioned its demands for subsidies as an economic development tool in a region hit hard by unemployment.

Months later, Morgan Stanley wrote off its $1.2 billion investment in Revel. The company withdrew its application for state subsidies and went looking for other investors because the Chinese backers had also walked away.

However, by early, 2011, according to WSJ Online, New Jersey governor Chris Christie was talking about a new economic stimulus program aimed at reviving tourism to Atlantic City, with — surprise, surprise! — Revel as a key partner in a 20-year deal that would see the casino receive $261 million in up-front financing and the state getting a stake in downstream revenues. (According to the New Jersey Casino Control Commission’s (NJCCC) 2011 annual report [ PDF ], the company would also get $125 million for infrastructure improvements.) The company also managed to attract an $850 million investment from J.P. Morgan & Co., the WSJ reported.

Hurricane Sandy made matters much, much worse along the Boardwalk. And by this past December, WSJ reported that the Revel casino and hotel had failed to pay its quarterly taxes to Atlantic City. “According to [Standard &Poors], gambling revenues at Revel have been “‘well below expectations.'” Last month, the company called in restructuring experts, and plans to file under Chapter 11 this month.

Atlantic City, obviously, is not Toronto. But Revel’s story holds some lessons: One, intense competition from a neighbouring jurisdiction — in this case, Pennsylvania — can prove to be extremely difficult to reverse. Even a glitzy new facility isn’t a slam-dunk way of retaining business.

Two, when a casino company runs into money problems mid-construction, it will not hesitate to ask taxpayers to help stake the project in the name of local economic development, jobs and a generally bright future. (Interestingly, NJCCC report linked above said the $2.5 billion Revel project was expected to create 5,000 to 5,500 permanent jobs — a figure that is substantially less than MGM’s pledge of 10,000 new jobs for the $3 to $4 billion integrated casino-resort at the CNE.)

Three, if not enough gamblers darken the doors of a new casino resort, local governments can be left holding the proverbial bag, never mind the upbeat talk of hosting fees. Indeed, if Revel’s creditors can’t find a new operator, the casino will go down in gaming history as a costly monument to bad timing and worse luck.

As casino firms know better than most, not every hand comes up a winner.