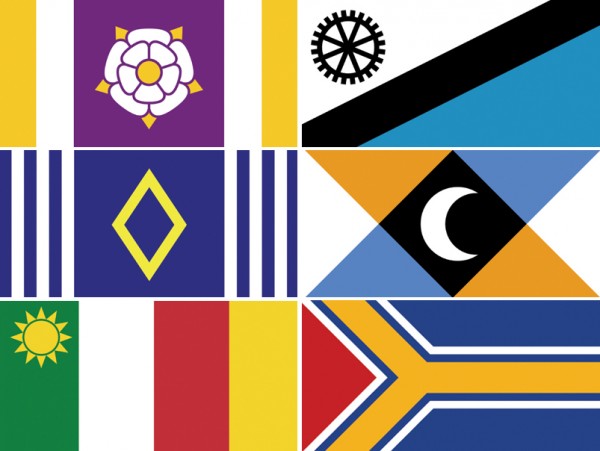 While Toronto is often called the “city of neighbourhoods,” there is very little visual material that celebrate these areas (outside of customized street signs and pole banners). Enter Brendan Hennessey, a local urbanist who took it upon himself to research the origin of neighbourhoods, local street names, and the current elements (social, cultural, political) that give each area its character.

You can see this feature in our Winter 2012-13 which is still on some newsstands across the country for a few more days.

The flag colours are based on the flag of Italy, with the golden sun taken from the Little Italy street signs.

The red triangle in the top right is derived from the Mr. Christie Cookies logo (which the street is named after). The sloping green represents the hills of Christie Pits.

The black diagonal stripe and white background are taken from design elements of the Old Mill’s Tudor architecture, while the blue area represents the mill’s source of power: the Humber River.

The sideways Y symbolizes both the street’s name and the colour used on subway maps that denotes the Yonge line.

Green represents the numerous parks that Eglinton passes by; blue represents the rivers and creeks it passes over; and gold represents the Golden Mile, Scarborough’s famous car sales strip. The three rings are taken from Earl of Eglinton’s coat of arms and joined together to represent Eglinton’s status as the one major road that links all six of the former municipalities.

The diamond symbol is from Lord Dufferin’s coat of arms, while the stripes symbolize the length of the street which touches both the northern and southern boundaries of the city.

A stylized bridge, which is a canting (basically a heraldic pun) of the road’s name. The blue and white colours represent the former edge of ancient Lake Iroquois, while orange is the main colour of the iconic Dupont subway station.

The three stripes represent the shore, the lake, and the sky. The sailboat is a common sight on the waterfront and is used as a symbol by some of the Lakeshore BIAs.

The crescent, black and white colours, and diagonal lines are taken from the coat of arms of the English Davenport family. The diagonals also represent Davenport’s deviation from Toronto’s grid system.

The green symbolizes the park, the circle represents serenity of the park, and the pink denotes the park’s cherry blossoms.

The horizontal red and white are derived from the Polish flag — the long standing community on Roncesvalles — while yellow and green symbolize the small Spanish town the street is named after. The four colours are connected by a set of British Colonel pips, representing the regiment who won the 1813 Battle of Roncesvalles.

A York rose on purple (a traditional royal colour) with gold bars that mimic the colours of Royal York’s subway station tiles.

The word Spadina is derived from the Ojibwe word “Ishpadinaa” meaning high hill. The stripes mimic a hill and create a stylized “S.” Red and gold represent the Chinese community and the blue and white the vacated Jewish community.