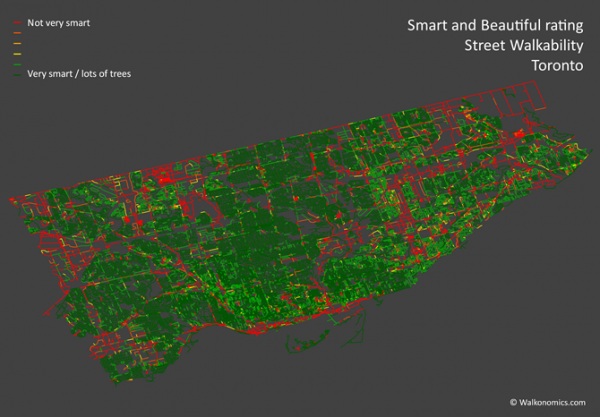 Walkonomics, a British-based company, is launching their walkability app in Toronto. It’s a concept pioneered by American company Walkscore, whose frequent citation in real estate ads is a sign of the increasing appeal of walkability in cities. Walkscore has also been criticized, though, as a crude and sometimes misleading tool, and Walkonomics claims to bring additional refinements to the task of measuring walking appeal. From their press release:

While other walkability apps only measure how many destinations are within walking distance of a particular location, Walkonomics maps and rates each and every street for eight key walkability factors:

With the help of the City of Toronto, Walkonomics has mapped and rated over 42,000 street segments in Toronto for their pedestrian-friendliness.  We have been able to do this by analysing a large amount of Open Data from the city including:

The Walkonomics app also allows local residents and communities to add their own ratings, reviews and ideas for improvement for each street.

From the “high” rated streets cited in the press release and a quick review of a few locations, the app seems to biased towards residential streets and against  shopping streets — for example, Kensington Market gets a low rating, and the popular section of Bloor Street West  in the Annex gets a low rating while the leafy Annex residential streets nearby get high ratings.

Regardless, the new app is a welcome addition to developing the concept of walkability. It will be interesting to see how this app evolves and competes with Walkscore.