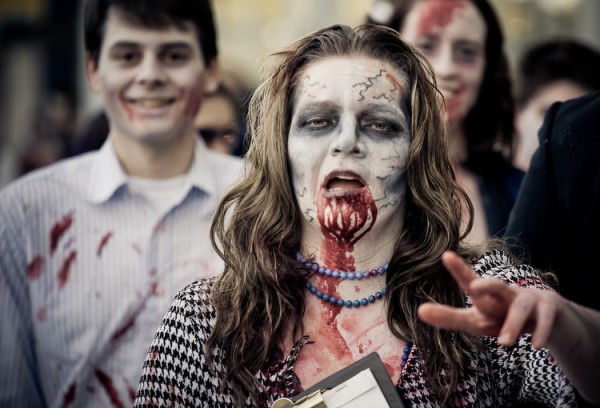 An unidentified parasite is infecting people across the city. Legions of infected Torontonians lurch through the streets, in search of one thing: delicious brains. Hospitals and clinics are overrun, and before quarantines can be put in place, zombies spread to nearby neighbourhoods throughout the downtown core. Once it becomes clear that the outbreak won’t be contained, you begin to load up on supplies and escape the city. However, thousands of people are thinking the same thing, leading to freeways packed with cars that aren’t moving. The zombies are coming. What do you do now?

If you’ve ever found yourself considering the best way to survive a zombie infestation, you’re not alone. It’s been 44 years since George A. Romero’s Night of the Living Dead modernized the zombie as a reanimated, flesh-hungry corpse. But in the past decade, zombies have spread through mainstream culture like never before. Even the Center for Disease Control and The Weather Network are using zombies as an icon for emergency preparedness.

The zombie culture is infectious, and Toronto — home to the first recreational Zombie Walk, and to Romero himself — is now the epicentre. Interestingly, zombie movies, video games, and comics tend to focus on survivors in suburban or small-town America, but what would Torontonians experience in a real-life zombie outbreak?

With freeways blocked and zombies multiplying all around you, a safer option to get out of town could be to utilize Toronto’s rail corridors. Many rail lines through the city are either above or below grade, and nearly all have some form of fence or barricade to separate them from surrounding neighbourhoods. Most follow similar routes to the freeways, and are wide enough — or offer long lines of sight — so that potential threats or obstacles can be avoided.

Without disaster relief or institutional support, looting would become the primary method of resource acquisition for zombie survivors. In the initial stages of an outbreak, locations such as big box stores and shopping malls would become easy targets for people looking to stock up on supplies. This would leave much of the city’s smaller business untouched, making them the ideal locations for scavenging. However, what is probably most iconic in zombie survival strategies is something much of Toronto lacks access to: firearms. Without a reliable way to defend themselves, survivors would have to find a shelter that can be made inaccessible to zombies, but still allow ways to move around the area to collect supplies.

Most major streets in Toronto’s older neighbourhoods are home to two- and three-storey buildings featuring street-level retail space with apartment units on the floors above. The apartments are accessed by separated, narrow staircases going down to the street. Wedging heavy, awkward-to-move furniture in these stairwells could render them inaccessible to zombies. If the building doesn’t have swing- or retractable-ladder fire escapes to provide on-demand ground-level access that would be out of a zombie’s reach, survivors could construct rope ladders and even use simple block and tackles to lift supplies. The roofs of these buildings are generally close enough to allow survivors to travel across an entire city block without contact with any zombies. With the right tools and supplies, survivor colonies in these buildings could even build makeshift causeways over the street and open up adjacent blocks. What’s more, the neighbourhoods surrounding these blocks typically follow a grid system where vehicles could be parked tightly to further barricade the immediate area. Although this tactic likely wouldn’t be able to stop a large horde of undead brain eaters, it should be able to keep out more casual “roamers.”

In addition to security, the ample roof space on these buildings could allow survivors to become more self-sustainable. By creating rooftop gardens to grow their own produce and large cisterns to collect rainwater, survivors would rarely have to leave their shelters. Even electricity could be reintroduced without generators — which create a constant need for gasoline — by wiring a power inverter and battery bank through solar panels salvaged from Toronto’s digital parking meters.

Such accommodations could support hundreds of survivors for an extended period. But in a pandemic or apocalyptic scenario, where help isn’t likely to come, people would need to find a place to start over.

Since it’s not connected to the mainland, there is a chance the Toronto Islands will have remained safe during an outbreak, and as such, would be a potential rallying point for survivors in the city (are you listening, Port Authority?). With the many marinas along Toronto’s waterfront, the islands would be easy enough for survivors to reach. If there is any chance for relief or rescue, Billy Bishop Airport would likely be an ideal location where help could get to, should it ever come. And if not, at least survivors wouldn’t have to be on the 35-year-long waiting list to finally get to live on the Island.

This article was published in the “disaster!” section of the summer 2012 issue of Spacing