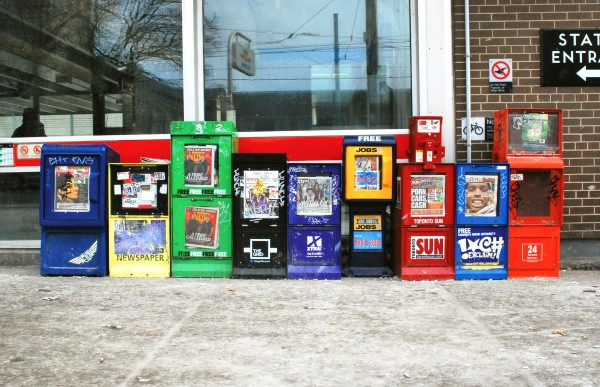 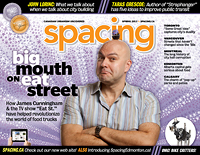 The Spring 2013 issue of Spacing is our second largest ever and is jammed packed with a slew of great articles, photos, and interviews focused on Canadian urbanism. This article appears in the issue in our Infrastructure Fetish section. For more unique articles focused on the public realm of Toronto and Canadian cities pick up a copy today. Find your copy in these stores.

Newspaper boxes are a common sight in cities. They survive getting beaten up, vandalized, and filled with trash on a regular basis. But the boxes may not last through the shifting landscape of news media distribution.

Carly Hinks, acting manager of Toronto’s street furniture program, says that there are about 9,000 newspaper boxes holding 20 different publications within the city. That number is a sharp drop from 2006, when there were approximately 16,000 boxes.

Some publications have ditched the newspaper box altogether. The Globe and Mail got rid of its downtown boxes in late 2012. A spokesperson from the Globe says the decision was made in light of its readers’ changing habits, noting that the demographic they are going after prefers home or office delivery, or that they stop by their corner store to buy a copy.

But according to Laas Turnbull, publisher and editor-in-chief of Toronto alt-weekly The Grid, the newspaper box is much more than just a box.
“I really think of them as being probably the most significant marketing tool in our arsenal,” he says, noting that his publication’s 400 boxes are an important part of Toronto’s streetscape. “When people see them day in and day out, it’s sort of burned into their subconscious.”

Turnbull says that The Grid has no plans to scale back distribution (their circulation actually increased last year), but he does think that print — and therefore the newspaper box’s — days are numbered.

“I foresee a future where there are no newspapers, unfortunately,” he says. “I think digital technologies are going to ensure that that happens.” But he does note that he doesn’t think that will happen anytime soon.

Newspaper boxes also bring in revenue for the City, and can be a significant expense for publications. “We license every box,” Hinks says, noting that the licenses are renewed on an annual basis. Each publication pays about $29 per box for their first 100 boxes, and then $113 for each additional box. Last year, Toronto’s street boxes brought in $1-million in revenue.

Some of the boxes that do remain in the city are undergoing a change. Toronto’s new consolidated newspaper boxes — large structures that hold eight or 12 different publications — are being installed as per a street furniture contract between the City and Astral Media.

Thirteen of these consolidated boxes have hit the city’s streets, numbers that will peak at 500 during the 20-year contract. “The advantage is its cleaner, smaller footprint for the city,” Hinks says, noting that they also can benefit the newspapers. “[Publication companies] don’t have to worry about the actual maintenance; they just have to worry about stocking their unit.”

But this change was not welcome by all papers. Turnbull says that these consolidated boxes limit branding, as newspapers are all lumped together. “We put a lot of thought and effort into the design of our boxes,” he says.

Hinks says that while the consolidated boxes may limit branding, they do not represent the majority of newspaper boxes on Toronto’s streets. “It’s only 500 kiosks [out of 9,000]; it’s not all of the new vending boxes,” she says.

Hinks also says that despite the losses experienced since 2006, companies are still submitting new applications annually. “Last year we licensed more boxes than were terminated,” she says. So for those foretelling the death of print, it is still too premature to bury the newspaper box.