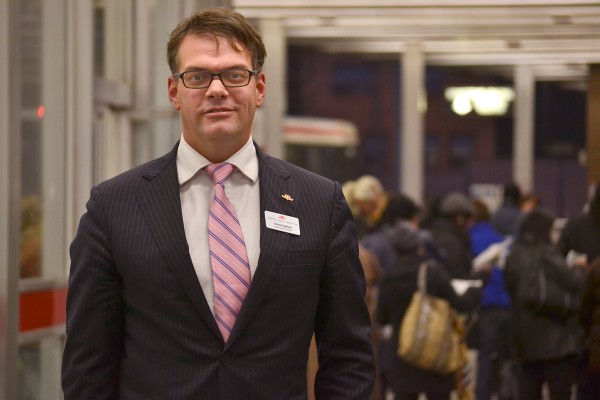 Chris Upfold will be answering questions and soliciting feedback from the public along with TTC CEO Andy Byford on May 15th. The event – ‘Transit Talk’, hosted by transit advocacy group TTCriders, is an opportunity for the public to engage TTC decision makers and influence TTC operations. For more information, or to register, please visit this site.

Chris Upfold is Chief Customer Officer at the TTC. A native Ontarian, Upfold joined the TTC from the London Underground in 2011. Spacing sat down with him to discuss his role and how he aims to enhance the TTC rider’s experience.

Upfold: I head a group at the TTC responsible for service strategy and planning. We decide when and where buses run. Together with marketing, communications, and the customer service centre, we help define the TTC’s service offering. We gauge customer preferences and decide what to offer. After us, there’s another group responsible for implementation, which includes HR, finance, IT, and operations. My group becomes involved again to evaluate how well the service operated, if customer expectations were met, and ways to improve next time.

Spacing: How is this structure an improvement on past TTC methods?

Upfold: There wasn’t a well-defined model in terms of service [in the past]. Service planning was formerly part of operations. The individuals that set service strategy were part of the same group that was running the service. It was difficult for them to step back and evaluate.

Spacing: What changed within the TTC that forced the organization to innovate?

Upfold: When I was hired, my job was oriented around “soft stuff,” like information and communications. I was never comfortable with a position designed in such a way. Customers primarily care about how well the service runs. With that in mind, Gary Webster (now Andy Byford) and I set about redefining the TTC’s service delivery model. We changed the organizational structure in order to put the customer at the centre of the business.

Spacing: What major customer service initiatives have been launched in the last year?

Upfold: We went through a period in 2011 where we were pressured to reduce our budget. We pulled through and dramatically increased service. That’s important because the TTC’s core service proposition is a vehicle showing up. We also launched some initiatives around cleaner facilities, such as washrooms, trackside walls, and litter. Cleanliness goes along a way toward proving the competence of the TTC. If our City and Province are debating who should run transit and where to apportion funding, then we need to ask ourselves: Why would anybody trust us if we can’t keep our stations clean?

Spacing: It seems like the TTC is beginning to focus on smaller details. How much of that is inspired by your past experience as a manager at the London Underground?

Upfold: A major part. In my ten years there, I learned that senior managers should focus on the nitty gritty of transit operations. You need to consider details like where a particular sign should be placed and what a particular map will look like. We had a great managing director at the Underground named Tim O’ Toole. His concept was a “controlled environment” — an environment where customers feel at ease and where they don’t have to worry about the meaning of a note that’s been Scotch-taped to the window of a collector’s booth.

Much of it comes down to basic business principles. Collector booths are the TTC’s storefront. Every business knows that’s something you need to control. For that reason, we’ve been rolling out “wraps” at booths which aim to present a controlled environment while eliminating hand-written ephemera. It goes back to credibility and about customers’ feelings about the TTC. If we can’t control what the store window looks like, why would the customer trust us to control the rest of the system?

Spacing: Is there anything else about the London Underground that the TTC should emulate?

Upfold: Consistency of service. The Underground isn’t a paragon of absolute reliability but it functions well considering how old it is. Every little thing matters, every second counts, and that was drilled into every Underground employee. I remember having discussions about speeding up service by three seconds! We hired people to hold batons and help dispatch trains. The goal was making sure that the train operator didn’t have to observe boardings. We figured out that we could squeeze three seconds out of every station if the driver just focused on the changing signal light.

Spacing: When riding the TTC, you like to wear a name-tag with your title visible. How do transit users react?

Upfold: Always positive. People like that I’m willing to put myself out there. I do it because I want us to be accountable to the customer and I want to demonstrate my pride in the TTC. I’m also sending a message to frontline staff. They’re visible because they wear uniforms every day, and I want customers to know who I am as well.