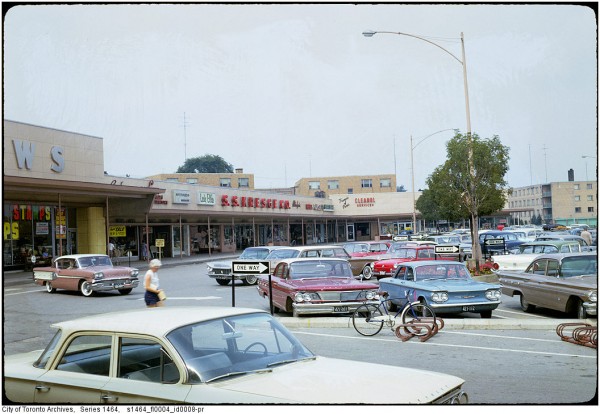 Today at Etobicoke community council, councillors are debating the future development plans of the Humbertown Shopping Centre. This article, by Spacing contributor Robert Ruggiero, appeared in our winter 2012/13 issue.

From First Nations to forestry, the Humber River has a history of anchoring central Etobicoke. The trees are towering, roads are wide and graceful, street names are exceptionally post-war idyllic, and families mostly fall under the professional and managerial tier of middle class Canadians. This may be the most middle part of Middle Canada.

Humbertown, along Royal York Road north of Dundas Street West, was a neighbourhood master-planned in the 1940s and built-out over the next three decades. Stately Tudors and Brady Bunch back-splits offer glimpses into evolving architectural tastes over the decades. This area features recreational and social facilities, a school, a park, and the Humbertown Shopping Centre. Humbertown is also home to 500 three-storey walk-up apartments that, while market-rate, are still affordable in Toronto’s inflated rental market. In a sense, Humbertown was a rare attempt at a “complete community,” long before this was the planning norm.

Built in 1956, Humbertown Shopping Centre still largely resembles its original, revolutionary design of a one-stop shopping hub with covered arcades and free parking. It expanded slightly in the ’90s, creating an enclosed, temperature-controlled environment on one side of the plaza. Most of the area homes have been substantially rebuilt since Humbertown’s inception, and a subway station arrived 1.5 kilometres away. While the vast majority of the plaza is still tenanted, there are conspicuous pockmarks — a handful of vacant storefronts. Though well maintained and regularly visited by locals, this centre no longer represents a go-to retail destination.

Humbertown is a typical inner-suburb story: the population here is aging and shrinking, overall density is declining, and smaller families are living in existing, large houses. The saving grace of this decline has been The James Club, an innovative infill development that repurposed large, irregular lots originally intended for single homes into 200 units.

However, the neighbourhood population only went up by 70 people, when you factor in those who have also moved out. When overall population growth is less than half the rate of the number of new dwellings, it is apparent that a major shift in demographics is occurring.

In 2006, First Capital Realty purchased the aging shopping centre with the intention to redevelop it. The proposal they presented in early 2012 has gone through numerous iterations, from a single point tower and low-rise residential, to five buildings of varying heights, to a current plan that consists of a high-rise tower, two mid-rise buildings, a base of two-storey retail, and a series of green spaces.

This plan, unfortunately, has been met with fierce opposition from residents. The Humber Valley Village Residents Association (HVVRA) became vocal opponents at community meetings, maintaining that this development strays from the current character of the community. Again and again, residents conveyed the family-centric nature of the area — forgetting about the hundreds of apartment buildings which surround, and which make up one-third of households in the community. The opponents’ assertions are at odds with statistics that reveal single and two-person households are the vast majority in the area.

At community meetings, HVVRA supporters flung insults at the development team and City planners, accusing them of being “drunk” and generally ignorant. They distributed flyers with images that had the green roofs removed from the proposed buildings, insisting green roofs would only benefit birds. The local councillor, Gloria Lindsay Luby, took a direct stand against the proposal, which provided additional fodder for residents. Both the councillor and the ratepayers’ director likened this plan to a direct assault on their suburban style of living. Incessant heckling and shouting meant that no proper dialogue ensued.

An involved community is important, and Toronto residents have rallied and successfully preserved many elements of the city we love. Yet the question remains: is Humbertown Shopping Centre really worth saving? The conversation has evolved from “No,” to “Maybe,” as the HVVRA is working on an alternate plan [editor’s note: this article was first published in Dec. 2012; the HVVRA alternative plan was recently unveiled]. But their design consultation meetings are only open to those who pay membership fees into the association.

Humbertown is not a unique case in this city. It is finally playing catch-up to infrastructure investments from decades ago. The TTC subway arrived in the late ’60s, and an Eglinton LRT is proposed, but both of these are moot without adding density.

A healthy community would have never let Humbertown dwindle to its current state. Even low-rise and wealthy Forest Hill Village has more than double the density of Humbertown. Hundreds of thousands of people are predicted to move to Toronto over the next few decades, and not all will move into the downtown core. The flow of population traffic is simply beyond control of the local residents. Neighbourhoods are not islands. Change will come, welcome or not.