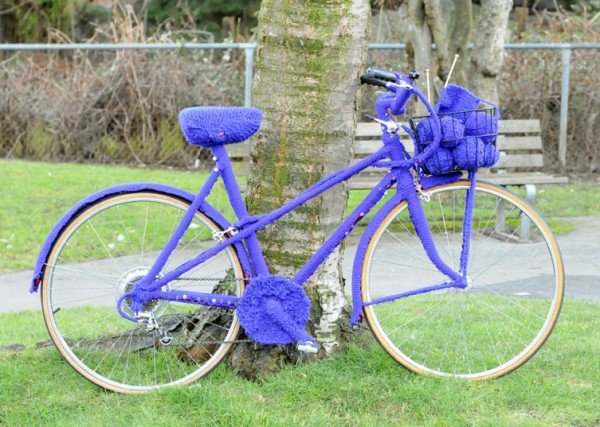 Now that winter’s woolen socks and handmade scarfs are back in their closets, urban knitters have started using public space as their summer medium.

Instead of expressing themselves with spray paint or chalk, these craft-ffiti artists are knitting and crocheting bold patterns and “yarn bombing” their public spaces. The first examples of yarn bombing were seen in May 2004 in the Netherlands and the art is now becoming popular worldwide.

Saturday, June 8 marks the third annual International Yarn Bombing Day, an event started by Joann Matvichuk, a fibre artist from Lethbridge, Alberta. Neighbourhoods all across the world are filled with knitted and crocheted symbols hung from trees and signs, while lampposts and bike racks are fitted with yarn cozies.

Knitting culture in Toronto has grown from small gatherings at people’s houses to knitting cafés and stores that are offering classes to people of all skill levels. Kristin Ledtett, owner of Knit Café on Queen Street West, recalls the early days when her roommates (now business partners) started a knitting club at their house.

“It got to a point where we didn’t know half of the people who came. It was like this crazy phenomenon was happening in Toronto,” Ledtett says. After attending a trade show in New York and visiting the city’s knitting cafés, inspiration was sparked and, despite lacking a formal plan for the business, Ledtett and her friends opened the Knit Café in 2005. 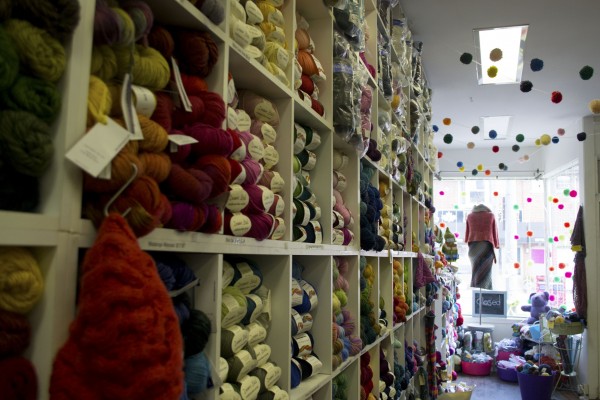 “It’s hard to meet new people in a big city like New York and everyone was chatting, getting to know each other in the café,” she says. “We realized this is the case in Toronto and was the reason why so many people were showing up at our house. People need a social engagement as well as an outlet for their creativity.  It’s a way of personal expression as any other public art. Knitters are attracted to colour, fibres and texture. Once you start working with those elements it’s natural to want to bring them to light for other people to experience.”

On Bathurst Street, Haley Waxberg and her friendly bird Pluto have been running Knit-O-Matic for the last nine years. The shop offers classes for all knitters, whether you’re a needle-novice or not. This is the first year Knit-O-Matic is getting involved with International Yarn Bombing Day. From June 1–8, Waxberg and friends will be hanging tiny yarn-graffiti tags on all manner of public space infrastructure throughout the neighbourhood.

“I want to yarn-bomb a community,” Waxberg explains with a smile. “People can make something small and put it out in the neighbourhood for everyone to experience. People can experience the art in a whimsical way. Hopefully, it can inspire other neighourhoods to take part. Yarn bombers challenge the craft of media, the idea of knitting, and gender roles. They’re breaking the old notions of knitting.”

The only rules are to avoid private property (unless it’s your own), and not to harm any plants. In 2010, a Norway Maple in the south side of Trinity Bellwoods park was yarn-bombed. However, the artist who created this installation of yarn graffiti hammered nails directly into the bark of the tree to create a crisscross design. Three weeks later, a sign was tied onto the yarn from The Friends of Trinity Bellwoods Park (FTPBP) stating that these holes have left the tree damaged. Clean-up is also a concern. Artists should take down their pieces once they begin to fray. Organizations such as Street Knit collect old yarn and knit them into clothing for homeless outreach programs instead of throwing it out. 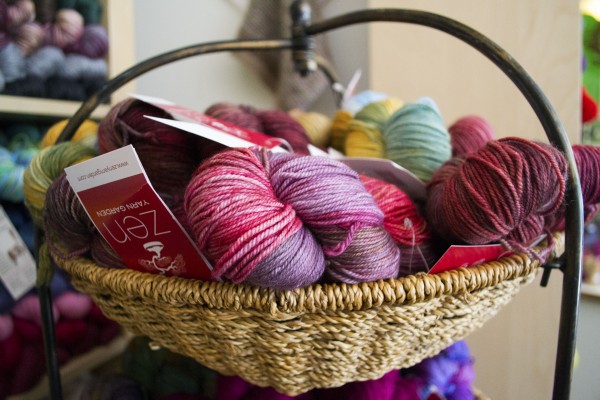 The yarn bombing phenomenon has even inspired a book: Yarn Bombing: The Art of Crochet and Knit Graffiti, by Mandy Moore and Leanne Prain. It was in 2005 that Prain became interested in yarn bombing.

“Craft blogs were just starting to emerge and I was reading them veraciously,” explains Prain, who began knitting in 2004 with the help of a friend. “I happened to come across the work of Masquerade — two girls in Sweden who were creating knit and crochet graffiti — and fell in love with their work. I loved the colour choices, the playfulness of knit graffiti, and the audacity of the idea. A few years later, I found myself in a grad school program for publishing and pitched the book idea. I had no idea that all my passions would come together and it would become a real book.”

Prain has participated in many yarn bombing events, from personal street art knitting to community projects like the one for Joy Kogawa House in Vancouver, which entailed over 300 crocheters and knitters gathering together and putting up tiny knitted pink cherry blossoms on the historic, but dormant, cherry tree that sits on the house’s property.

“Touching a strand of wool or swatch of fabric will always be more appealing than a touch screen,” says Prain. “We’re also at a point with globalization where there is a sameness in our cities. I can walk into the Gap in Dubai or the Gap in Vancouver and buy an identical item of clothing, but I can only see a yarn bomb or a handmade item in one place as you can’t replicate things made by hand. I think we are gaining a greater sense of appreciation of unique things. Handmade items let us tell our regional stories.” 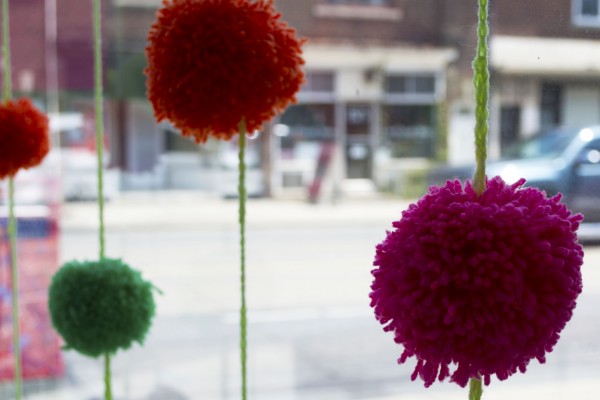 In Vancouver, public schoolteacher Jessica Glesby is bringing knitting and yarn bombing into classrooms. She proposed a yarn bombing class, free for students from grades 9-12.

The idea to teach yarn bombing came to Glesby in 2009 when she started knitting because she wanted to cover her bicycle in a woolen cozy.

“I taught students how to knit, about its benefits both for community and health, knitting history, breaking down stereotypes of the granny knitter and the youthful male graffiti artist, the idea of reclaiming knitting, feminism and gender stereotypes and how to knit for free or knit for the environment, like making recycled plarn (yarn made from plastic),” says Glesby. “Students were challenged to identify a space in their lives that felt cold, physically or mentally, and warm that space up.”

David Demchuk’s mother tried to teach him how to knit a few times, but he didn’t catch on until he moved to Toronto in 1984 where the women at his workplace would get together on their lunch break and knit. He made his first piece that winter; a black mohair sweater.

“Knitting is perceived as old-fashioned and feminine,” says Demchuk. “Yarn bombing confronts people with creativity that’s not heavily disciplined or aestheticized. It can look perfect and polished or hazardous and insane — that’s part of its charm. It breaks down a lot of barriers that people have about creativity.”