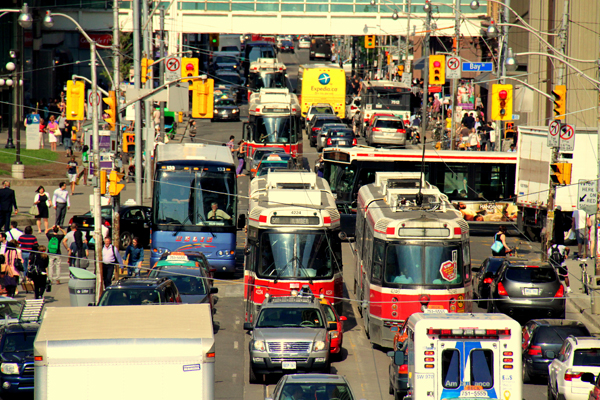 Excerpt from “The Art & Science of Outreach” by John Lorinc

Early last winter, in the middle of flu season, TTC riders began to notice edgy ads in the subways featuring bustling urban street scenes that communicated both a sense of urgency and over-crowding. Across the top ran a provocative question printed in a font resembling those overhead highway traffic warnings. “Feeling Congested?” asked the ad. “That’s why we’re talking about transportation.”

The branding, produced by a four-and-a-half-year old agency called Public Inc., was the pointy end of an ambitious campaign to fuse grabby social marketing techniques with the hard slogging of detailed public consultation.

In this case, the question up for consultation had to do with the city’s transit woes. If the ads moved you to visit the website, you’d find lots of analysis about Toronto’s transportation crisis, the debate over revenue tools for transit expansion, and information about how to put in your two cents.

Phillip Haid, Public’s co-founder and the author of CivicActionGTA’s “Your 32” campaign, told me the goal was to draw in Torontonians with cheeky messaging that played to their mounting sense of overcrowding — on sidewalks, subways, and highways — rather than the more anodyne language about building a better city or the abstractions of multi-billion-dollar productivity losses due to gridlock. “We thought, why don’t we just own that issue? I have to give you a reason to come out, and everyone has that experience of feeling congested.” He continues: “Rather than tell an economic story, we wanted to tell a quality-of-life story.”

To read more of this article by John Lorinc, pick up the latest issue of Spacing or subscribe.