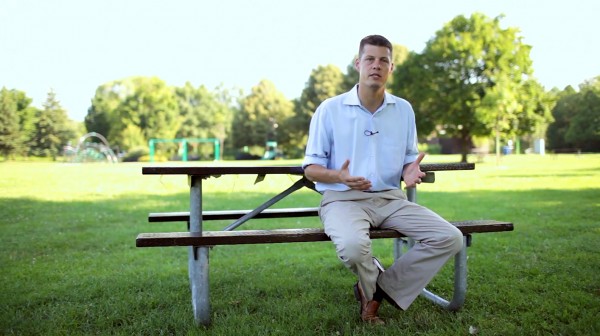 If I tried to catalogue the full inventory of Adam Giambrone’s prevarications in the Scarborough-Guildwood by-election, which will be decided on Thursday, I’d probably soak up all the available room on Spacing’s server. Suffice it to say the list is long and impressive, and will be well worth remembering the next time his name turns up – inevitably closer to downtown – on a ballot.

A good place to begin, however, is here, with his sunny “Meet Adam” Youtube video, co-starring Andrea Horwath, the least progressive progressive I’ve ever encountered.

Amidst sun-dappled shots of Scarborough, we hear the former city councillor and TTC chair wax on about the need for better “rapid” transit. The people in this community, he tells the camera, “want to have what other parts of the city have enjoyed for years and they want it now” [emphasis added].

Then Horwath chimes in and opines that Scarborough residents have been paying more and more for years for transit but haven’t gotten better service and simply can’t afford to dig deeper. (More on this in a moment.)

Transit City doesn’t figure anywhere in Giambrone’s campaign bio or materials, and it certainly didn’t get a walk-on part in the “Meet Adam” video. Which, as Alice said, is “curious and curiouser,” because Giambrone, of course, was Mr. Transit City for so many years — the leading evangelist for light rail — the transit mode that, these days, dare not speak its name (at least in Scarborough).

At a high-voltage press conference back in March, 2007, Giambrone proudly unveiled the $10 billion plan to criss-cross Toronto with LRT lines, including a 15 km connection from Kennedy Station to Malvern that would replace the Scarborough RT and bring rapid transit to one of the city’s poorest communities.

The strategy, he told the assembled scribes, is “designed to inspire people” [emphasis added]. It would bring a downtown-style transit network to the rest of the city. As he told The Star, Transit City “will restore Toronto’s stature as a leader in urban transit.” Such bold statements. You can almost feel the hairs standing up….

Today, Giambrone’s faith in light rail — which he has re-asserted in numerous columns for his pliable patrons at NOW Magazine — is nowhere to be seen. His stance in this by-election has been to say he agrees with whatever city council chooses, which, as we know, is a subway to replace the RT, for an extra $1 billion (but probably more). As he tweeted before the council debate, “I support subways & LRT where they make sense. Right now I’m waiting to hear from #TOcouncil on transit plans for #Scarborough.” Inspired, indeed.

Green Party candidate Nick Leeson, a corporate lawyer, has no such qualms about supporting the LRT option. He says many residents tell him they have never heard the other side of the subway-vs-LRT debate — the cost, the delays, the shorter route — properly explained. Leeson, moreover, has lived in Vancouver and Calgary, regularly used the LRT in both cities and says he has little difficulty explaining why it is an entirely defensible option for large urban areas. “I wouldn’t be supporting an LRT if I didn’t believe it worked,” he told me Saturday.

And because of his stance, has he been dressed down while out on the hustings? “Absolutely not,” Leeson replies. “That’s the one issue in canvassing that usually is very favourable and has helped our party.”

Now let’s cut back to Giambrone, the NDP and this business of paying for transit. Back in March, Giambrone in NOW wrote approvingly of gas taxes, parking levies and sales taxes — “one of the least harmful [taxes] to the economy” and “close to equitable” — as potential revenue tools for Metrolinx. “We all have to recognize we need to ante up as taxpayers.” Fast forward to the by-election, and Giambrone’s stance is distinctly Ford-like (or Ford-lite): “People can’t afford to pay more…”

To be fair, Giambrone is not the only candidate eating his words. The Liberals’ Mitzie Hunter, in her days as CEO of Civic Action, not only backed LRTs generally, but also signed off on the pro-LRT recommendations of the expert panel (she was a member) established by council in the spring of 2012 to review transit alternatives for Sheppard east of Highway 404. As she told The National Post, “The LRT option is the choice for the ridership, for the funds that are available, and also for timeframe in terms of the impact on the community and for equity issues as well — bringing rapid transit to more people.”

But Giambrone’s stunning 180 is far more damning because, as a former elected official, he invested so much political and bureaucratic energy in the cause of light rail, and clearly saw Transit City as a springboard to higher public office.

The broader point to make here is that Rob Ford’s corrosive influence on all the parties and the state of debate is writ large in this by-election. He’s given too many political people from all three partisan clans permission to be astonishingly dishonest and unprincipled with both the voters and themselves. Josh Matlow’s incendiary exchange with Ford during the council debate was so devastating at least in part because there were so few others with the courage to join him.

How does this chapter end? Hunter, of course, will win on Thursday and likely go directly into cabinet. There, she’ll join a team that must confront the expensive and open-ended folly of transportation minister Glen Murray’s decision to tear up the $8.4 billion master agreement between Metrolinx and the City.

Giambrone, having burnished his reputation with Horwath, will come back downtown and resume the all-consuming business of rebuilding his political career. The NDP’s strategy to help him re-enter political life has certainly not been designed to inspire.