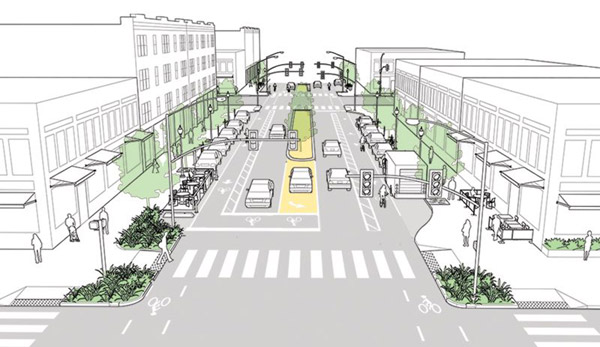 For a long time, road engineering standards have been a bane of good city-building. Generally designed to enable cars and trucks to travel safely at high speeds in some generic setting, they have tended ignore the reality of tightly-spaced urban areas where pedestrians and cyclists share the right-0f-way with vehicles. But they get applied to cities because city staff do not want to be accused of deviating from the accepted standard when designing infrastructure.

This week, urban engineering took a big step forward with the release of the Urban Street Design Guide by the National Association of City Transportation Officials (NACTO) in the US. The guide provides engineering standards, developed by professionals, that are specifically designed for cities. They are meant to not only ensure the safety of all city users, including pedestrians, cyclists and transit users as well as drivers, but also create cities that are vibrant and appealing:

A blueprint for designing 21st century streets, the Guide unveils the toolbox and the tactics cities use to make streets safer, more livable, and more economically vibrant.

A good example of the difference the guide makes lies in the issue of corner radii — the curve in the sidewalk at the corner of an intersection than enables vehicles to turn without mounting the curb. Traditionally, these have been designed so that cars can turn comfortably without stopping, and so that trucks and buses can turn directly from right lane to right lane. The result has been wide radii that encourage cars to speed around corners dangerously, and lengthens the space that pedestrians have to cross (as the guide says, “Longer crosswalks take more time to cross, increasing pedestrian exposure risk and diminishing safety.”)

The new guidelines change all that. Their focus on corner radii lies in ensuring that intersections are tight, comfortable for pedestrians, and encourage vehicles to slow down before turning:

Minimizing turning speeds is crucial to pedestrian safety, as corners are where drivers are most likely to encounter pedestrians crossing in the crosswalk.

The new guide also accepts that, in an urban setting, buses and trucks almost always take an extra lane to make a turn. The result is a significant decrease in the recommended radii.

Crucially, the guide presents this new approach in terms that speak directly to traffic engineers, with detailed footnotes on supporting research, and provide them with the kind of explicit standards and formulas that they need to do their work.

With this new guide, urban traffic engineers can design streets for cities without feeling that they are straying from the standards — on the contrary, now they will be conforming to the standard. As this new standard is applied, it will gradually re-orient urban streets from being focused on vehicles to serving all street users.

These are the kinds of details that can make a huge difference for how we use and experience a city, especially for pedestrians. While this guide was developed in the United States, there’s no reason why it can’t apply in Canadian cities too. I’m hoping to hear that this will be the new standard for Toronto’s road infrastructure in the near future.