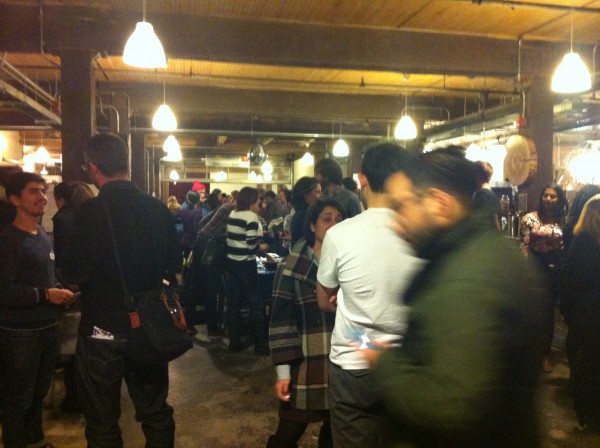 The crowd at Turnout Toronto, hosted at the Centre for Social Innovation

On the evening of January 14th, the Annex branch of the Center for Social Innovation hosted Turnout Toronto 2014, a civic engagement fair bringing together 21 “civic champions,” among them local politicians, organizations, and associations to discuss issues facing our city with the public. In the spacious first floor of the CSI building, an engaged crowd mingled around different booths including those from The Awesome Foundation, Spacing, Better Budget Toronto, No Jets Toronto, and the Ranked Ballot Initiative of Toronto. Interspersing the conversation were short speeches by politicians including Olivia Chow, Mayoral candidate Richard Underhill, and Councillor Mike Layton.

Standing on a chair overlooking the substantial crowd, Olivia Chow gave the welcoming speech, saying how pleased she was to see so many people in attendance, ready to engage with and debate the important issues shaping Toronto.

Layton spoke to guests about how the use of catchphrases like “stop the gravy train,” get attention and encourage voting. Afterwards, Layton ran an energetic brainstorming session with a crowd of civic-minded citizens to come up with new catchphrases for Toronto, one of the favourite suggestions being, “start the brain train.”

Underhill, an accomplished saxophone player, told the crowd that after being an “armchair quarterback” for years, the Rob Ford election made him realize it was time to get further involved in local politics. He also mentioned the proposed plans for the Toronto Island airport and how he is in favour of keeping it as simple as it is now. He praised the event, saying that the kind of civic engagement and ideas an event like Turnout Toronto brings shows how the people of the city know what is best.

The booths represented a varied range of topics, from The Awesome Foundation who take submissions for original, creative ideas and give monthly winners $1,000 to fund or begin funding their projects, to Better Budget TO, aiming to inform and influence the budget process.

At Spacing’s booth, guests were invited to check out the 10th anniversary issue, buy a subscription, or just chat about the content of the magazine. The success of Turnout Toronto underscores Underhill’s views on Torontonians knowing the needs of their city. “The citizens get it right, almost every time.”