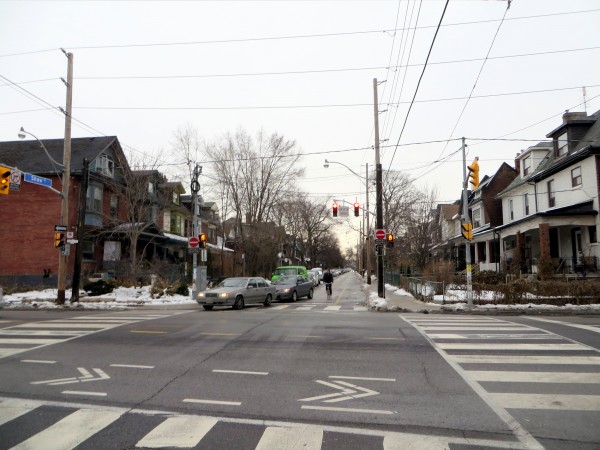 It has been a rather trying winter for cyclists in Toronto. Besides the unseasonably cold temperatures, the snow and ice has made cycling difficult. Bike lanes are left partly or completely snow-covered — only the occasional thaw manages to clear the lanes. But during one of those few days this winter where the snow had a chance to recede, I rode the entire length of Shaw Street, all the way from the railway tracks at Druro Street up to Davenport Road. Between Dundas and Dupont, a new contra-flow bike lane was recently added, permitting cyclists to legally ride north on what is otherwise a southbound one-way street. This is, by far, is the longest contraflow lane in the city, and the first to be installed in a decade.

The Shaw Street lane was the only major addition to Toronto’s bikeway network last year. With the completion of lane markings and the installation of traffic signals and signs, the lane opened, without fanfare, in December 2013. Plans were delayed for several years as the city waited on Ministry of Transportation clarification on the legality of such lanes, which was only recently resolved. A few contra-flow lanes have existed for several years  – on nearby Montrose Avenue for one block between Harbord and Bloor, on Logan south of Eastern Avenue, and on Strathcona Avenue between Carlaw Avenue and Blake Street, connecting Withrow Park with the bike lanes on Jones Avenue. These were installed before flags were raised on their legal status.

Shaw is one of several new cycling routes planned in the west end utilizing minor streets; the other two routes will connect the end of Harbord Street at Ossington to High Park and connect the West Toronto Railpath to Shaw, via Argyle Street. There are several other places where potential contra-flow lanes were identified in previous bike plans, such as on Dixon Avenue, which would cyclists to proceed straight from the bike lanes on Dundas Street East across Kingston Road towards the Beach.

Shaw Street connects several major east-west cycle corridors: Davenport, Barton, Harbord, and College Streets. A short jog via Duoro at the south end allows one to easily get to Strachan Avenue and the Martin Goodman Trail. The new contra-flow lane finally provides a proper link between Barton, a designated bike route between Shaw and the Annex, and Hallam Street, another signed bike route.

In the planning process, several corridors were examined for a new north-south bike route; Dovercourt Road, and Ossington and Montrose Avenues were considered, but rejected. Dovercourt and Ossington were deemed to be too busy (though I find Dovercourt to be quite reasonable), and Montrose  was not long enough to provide the network connections possible with Shaw, especially north of Bloor.

While Shaw starts at Douro, a short block south of King, the intersection of Strachan at Douro and Wellington is where I started my tour. Work on the railway underpass has progressed to the point that several tracks carrying GO and VIA trains to Milton, Kitchener and Barrie were moved into the trench and the level crossing removed. Work is still underway on a new permanent Strachan Avenue bridge, so the intersection is off-centre. Still, there are several improvements that could be made here that would make the new bike route more useful. Traffic signals would allow east-west traffic, especially cyclists, to cross Strachan. Cyclists could then follow Wellington Street, a safe route towards downtown. A left-turn lane — perhaps with bike boxes to allow cyclists to safely navigate to the left during a red signal — could allow the safe movement from the waterfront over to Shaw. The corner of Strachan and Douro/Wellington

There are bike lanes on Shaw between Douro and King Street, but none between King and Dundas. From King to Queen, there are streetcar tracks, used for short-turns and diversions of the King and Queen Cars. Streetcar tracks can be very dangerous to cyclists (speaking from experience) — the choice here is either to take the lane between the rails (and getting between them safely) or riding in the narrow “door zone” between the tracks and parked cars. Between Queen and Dundas, Shaw has a treed median. There are no bike lanes, but just sharrows reminding all users to share the road. At Dundas Street, there are a total of five traffic signals facing northbound traffic – three general yellow signals and two black signals, even though they all have the same directions. At this point, the contra-flow begins; cyclists may turn left, right or proceed straight ahead, but motorists may only turn left or right, as it was before the new contra-flow lane was installed. A sharrow awkwardly indicates that cyclists may/shall proceed straight from the left-turn lane. ‘Do not enter’ signage excepts bicycles and a “bike lane begins” sign make it quite clear. The major trouble spot is at College. Unlike Shaw’s intersections with Dundas, Harbord, Bloor and Dupont, the corner of College and Shaw was not modified. Making it worse are curb cuts at the corners that restrict the northbound bike lane to a mere 50 centimetres on both sides of the intersection. A pedestrian crossover is on the west side of the street, but it is very difficult for cyclists to cross College without dismounting, walking across the street in the crosswalk and resuming on the north side. As there is already a pedestrian crossover at this intersection, a replacement with a full traffic signal would be logical. One thing I noticed is that the yellow line that separates the narrow northbound bike lane with the general southbound lane was faded and almost non-existent in sections, while other paint on the street (southbound sharrows, the arrows on the speed humps, etc.) were still fresh. At times, it felt as if I was still riding up a one-way street. A major problem is cars stopped or parked illegally on the east side of the street, blocking both the bike lane and part of the southbound lane. I have encountered this each and every time I have walked or cycled on Shaw since the lane was opened. With only one narrow lane southbound, it forces cyclists to yield to southbound traffic. An illegally parked truck would be extremely difficult to pass safely, especially at night. North of Bloor, the on-street parking is on the east side of the street, the same side as the contraflow lane, and to the first time user, a bit confusing. This configuration was designed to preserve parking spaces, as there are fewer driveways and intersecting streets on the east side of Shaw. However, I did not find this to be as disconcerting as I had expected; it is easier in fact for those getting in and out of their cars to see oncoming cyclists and for cyclists to see cars ready to pull out. It also avoids the problem of illegally stopped cars mentioned above. One block of  Strathcona in the east end has a similar configuration.

North of Dupont, Shaw becomes a two-lane street again, and ends at Davenport Road, a major east-west bike route. Nearby, Bracondale Hill Road continues up the hill on one of the easiest climbs of the former Lake Iroquois shoreline. As at College, there are just stop signs controlling traffic, but there is a pedestrian crossover across Davenport on the east side. Traffic signals here could help cyclists turn left to head west or north up the hill; though the crossover, more conveniently located for left-turning cyclists, could be used if necessary.

On the whole, I am pleased with Shaw Street bike route, including the contra-flow lane. Shaw has become an integral part of Toronto’s central bike network, connecting many routes together and legalizing what is a common practice – riding the wrong way on a one-way street. There are many more opportunities for contraflow lanes – such as Brunswick Avenue between College and Dupont (or at least Barton). Brunswick currently alternates between northbound and southbound one-way segments, but with traffic signals at Harbord and Bloor, it could and should be open to cyclists going in both directions. The Dixon Avenue contraflow lane mentioned earlier would finally provide a logical end to the Dundas East bike lanes; there are many other examples of where contra-flow lanes could provide these simple connections across the city.

There are a few little tweaks that need to be made to improve the safety and utility of the route — in particular the connection with Strachan Avenue and at College Street, and strict enforcement of the no-stopping zone in the bike lane — but on the whole, this is a great step towards the long-delayed completion of Toronto’s bicycle network.