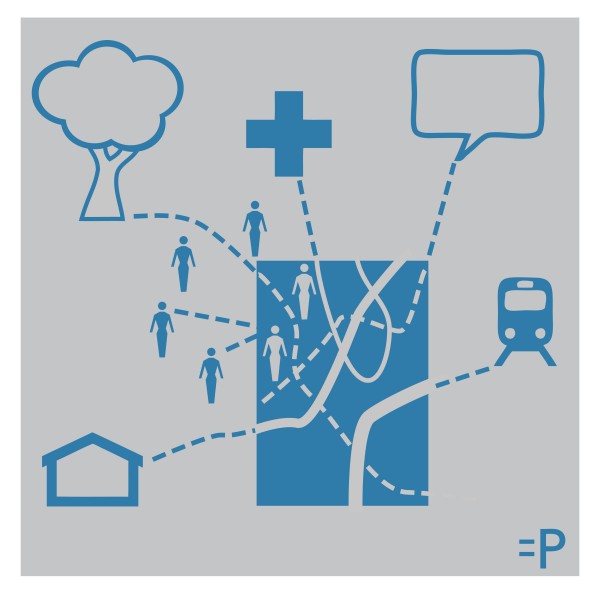 A critically important conversation topic that we should begin to engage in is how we can strategically use the design of cities to positively impact mental health.  This assertion may seem counter-intuitive given that cities are often associated with a number of factors that are popularly believed to agitate, and sometimes even spark some mental health illnesses: The noise pollution. The stressful hustle and bustle on public streets. The increasing disconnection between ourselves and our neighbours. The lack of affordable housing. The competition for well-paying and satisfying jobs in an unstable economy.

These and other popular, but not entirely accurate, perceptions about cities largely informed the ways that mental health facilities were designed, and also, the ways that people living with mental health issues were previously treated. Historically, mental health institutions were built outside of cities, enclosed behind high walls with overt surveillance, and no public thoroughfares. Recently, individuals have begun to reconsider the efficacy of this approach for a number of key reasons. Cities have undergone massive outgrowth and so areas formerly considered a “refuge” from the central core have become urbanized. At the same time mental practitioners and caregivers noticed that in-patients had a more difficult time reintegrating into their urban communities after being secluded during treatment. Also, designers recognized that brutalist and isolated building structures inadvertently reinforced discriminatory attitudes that people with mental health illnesses should be locked away.

Thankfully, our collective thinking has advanced in some important ways. Progressive mental health institutions like CAMH have dramatically transformed the sector’s approach to treating and collaborating with people living with mental health illnesses. Grassroots programs have organically emerged in local communities.  Bell Canada exemplifies the growing commitment of corporations to openly discuss and raise funds for mental health illnesses. That stated, perceptions of the negative impact of cities on our mental health persists.

It is incumbent on professionals engaged in design and city building to work more closely with mental health professionals, youth, individuals living with mental health illnesses, educators, and other members of the community. In so doing we would be able to cull existing knowledge across disciplines and lived experiences. We would also be able to develop best practices and strategies, which show the ways that cities support mental health.

The first step to realizing this goal is by transcending narrow silos and collaborating across professional disciplines and lived experiences. Next, design and city building professionals must expand conversations pertaining to issues such as transportation, affordable housing, and migration to cities. Interestingly, these, and other issues, directly intersect with mental health determinants. For instance, transit plays an integral role in connecting people to work, social networks, and services, which all contribute to mental health and wellness. Instead of having polarized transit debates comparing Light Rail Transit (LRT) to subways, there should be deeper investigation into how each option facilitates the ability of people to be mobile in ways that support their mental health. Another example of an intersecting issue is urban development and revitalization. With an unprecedented number of the world’s population migrating to cities over the next couple of decades, we must design communities to support them. Given that migration, poverty, and culture are all mental health determinants, it will be important to address these factors through thoughtfully designed, affordable, mixed-use communities.

These, and a number of other examples make the case for designing cities that contribute to our collective mental health. As we continue to address these issues let’s look to the city as a resource. Urban ecologies provide us with new treatment facilities interwoven into city life.  Informal gathering spaces and local hubs foster relationships. Transportation arteries and well-designed neighbourhoods are “connectors”, which promote accessibility. Built forms and strong local economies increase personal and community resilience. If these resources are optimized, design and city building may well emerge as an integral strategy for improving mental health.