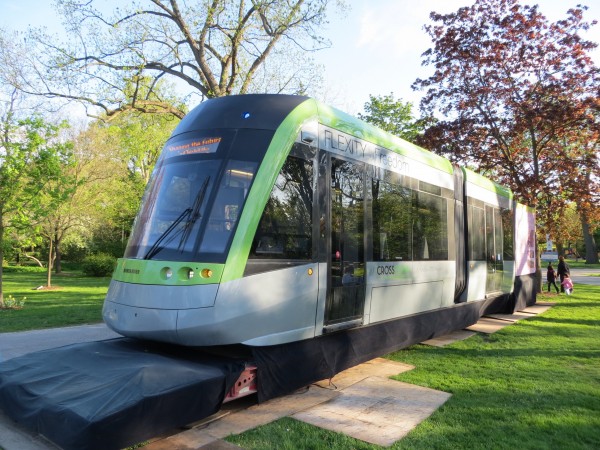 As we continue to debate the merits of subways and light rail here in Toronto, it’s worth noting that across southern Ontario, there’s unprecedented interest in building new major transit projects. In fact, five urban regions – Toronto, Hamilton, Kitchener-Waterloo, Ottawa, and Brampton-Mississauga – are planning or constructing new light rail transit (LRT) lines. Toronto’s Eglinton-Crosstown LRT, the centrepiece of the Transit City LRT plan, and the initial section of Ottawa’s Confederation Line, are both well under construction. The first phase of Waterloo Region’s light rail is funded and construction is set to begin later this year. Meanwhile, projects in Hamilton and Mississauga and Brampton are still unfunded even as construction plans progress, but both LRT plans face local opposition.

In Hamilton, plans for the B-Line light rail transit project have stagnated, largely due to a lack of support by Mayor Bob Bratina and city council. However,  the province might still announce funding for the east-west route connecting Hamilton’s downtown with the east end and McMaster University. In Brampton, local opposition threatens a crucial section of the LRT line planned there.

The Hurontario-Main Street LRT Project – named for the linear corridor through Brampton and Mississauga – has gone through several rounds of public meetings. The study team, coordinated by both municipalities, eventually decided that LRT was the preferred option. (Early alternatives studied included bus rapid transit, already implemented on a limited scale by way of limited stop buses operated by both municipalities, and even a subway.)  The line, if approved and funded, would connect Downtown Brampton to the north with Port Credit to the south, with a bi-directional loop in Mississauga’s City Centre. It would connect three GO Transit rail lines and serve some of the densest neighbourhoods in the 905 suburbs surrounding Toronto.

Metrolinx has recently stepped in as a partner in the latest phase of the Transit Project Assessment Process, joining the two suburban cities planning the route.

The Hurontario-Main LRT, as proposed, is very similar in design to LRT routes proposed in Toronto’s Transit City plan. light rail vehicles (LRVs) will operate in the median of a busy suburban arterial. Most of Hurontario and Main is six lanes wide; two traffic lanes would be removed to accommodate the LRT tracks. Near Downtown Brampton, LRVs would operate like a streetcar, in mixed traffic.

Outgoing Mississauga mayor Hazel McCallion is a keen supporter of the project, while Brampton’s mayor, Susan Fennell, has been less than enthusiastic. In 2013, Fennell put forward a counter-proposal to extend Brampton Transit-operated Züm buses to Port Credit, but this was later withdrawn.

Unfortunately, the latest design shortens the line slightly on the south end in Mississauga; the line’s southern terminus is now on Hurontario Street at the Port Credit GO Station. This is two blocks short of Lakeshore Road, the commercial heart of the historic and bustling neighbourhood. (An earlier plan had tracks continue south of Lakeshore, to a turn-back at Elizabeth and Port Streets.)

Downtown Brampton, the LRT’s northern terminus, is designated as an anchor “mobility hub” – identified by Metrolinx as a major transit hub where urban growth is to be encouraged. For it’s part, the city continues to encourage high-rise condominium and commercial development in the revitalizing downtown core. It’s the logical terminus of this major transit project.

Opposition in Brampton may threaten the project altogether, or cause the light rail to terminate further south, at Steeles Avenue, or at the Mississauga-Brampton border at Highway 407 (the proposed location of the maintenance yards). Main Street north of Nanwood Drive is lined with old large houses, many built over a century ago; the City of Brampton is in the midst of designating this area as a heritage conservation district. Among the wealthier residents in this neighbourhood is William G. Davis, the former premier of Ontario who famously stopped construction of the controversial Spadina Expressway in 1971.

To address residents’ concerns, plans now call for mixed-traffic operation on Main Street. This would allow full access to driveways and side streets, even if it causes LRVs to wait behind left-turning cars. Consultants are also “exploring catenary-less solutions,” such as batteries, so LRVs could operate off-wire in this section. Crossovers added near Steeles Avenue and near Gage Park allow Main Street to close for parades and the weekly downtown farmers’ market. The loss of street parking on Main Street downtown also has some local business owners concerned, but there is a surplus of parking spots in public off-street garages.

(The necessity of wireless operation seems a little ridiculous to me, as overhead wires are not a problem in other historic districts in Toronto and elsewhere in North America and Europe.)

Still, local light rail supporters are concerned that influential voters may scuttle the completion of the light rail project north to Downtown Brampton; a city council that’s lukewarm towards the project doesn’t help matters. Local residents have set up a website intended to gather support for the project. They are looking for people who support the project to send in comments to demonstrate that there are residents who are in favour, not just a small group of vocal opponents. 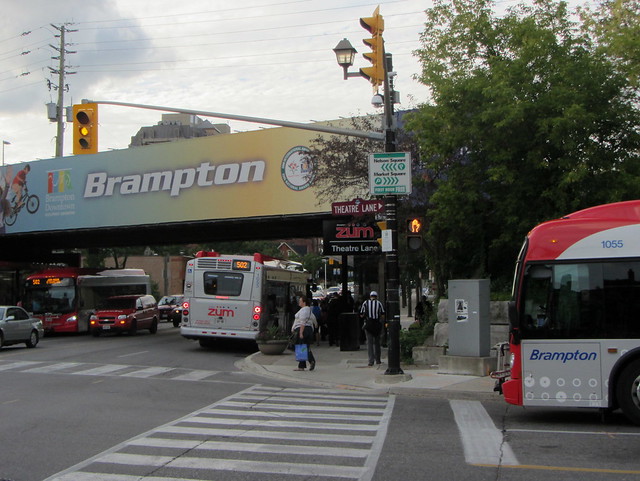 Downtown is served by seven Brampton Transit routes, including two successful “BRT-lite” Züm bus routes. The GO/VIA station, as well as the busy Queen Street corridor, by far, Brampton Transit’s busiest, all converge here; it’s a potential link connecting Kitchener and Guelph to Mississauga. Not building the LRT direct to Downtown Brampton, only to appease a few local opponents, would limit the utility of the project and undermine the city’s own hopes for its emerging urban centre. City council needs to demonstrate leadership and back the project as planned.