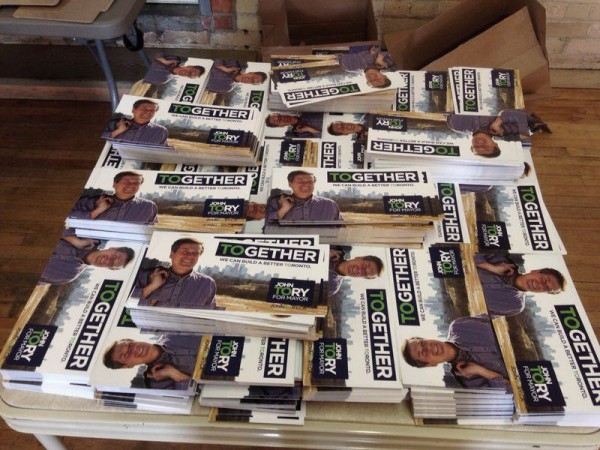 With Mayor Rob Ford out of the race, at least for the time being, John Tory suddenly finds himself with an unexpected opportunity to hoover some of the least hard-core members of Ford Nation. Most analysts estimate that Ford’s base is equivalent to about 25% of the voting public. But the mayor’s latest disappearing act could peel away several percentage points and drop them in Tory’s lap.

In an interview yesterday with Spacing at a Danforth cafe, Tory insisted he’s not going to tack right. But he did reveal that if he’s elected, he’ll push Metrolinx and the province to delay the Finch West and Sheppard East LRT projects so he can accelerate work on a Yonge Street Relief Line.

“If my next priority after the Scarborough subway is a Yonge Street Relief Line, then I have to get that funded and the agreement of the other governments to similarly move it to the top of the list. What follows is obviously a timetable of other priorities that are behind that. I can’t have it both ways and say we should proceed with those [Finch and Sheppard] immediately.”

Asked if he’d push to re-allocate the budget for the Finch/Sheppard projects — $2 billion from the province and another $333 million from the federal government – Tory replied, “No, I’m not saying that. I’m just saying you can’t have it both ways. If you’re going to say you’re going to do the Yonge Street Relief Line, you obviously have to fund that first…On Finch and Sheppard, I’d say it has to be part of the broader conversation with the province and Metrolinx.”

SPACING: The question many people have been asking: Do you believe the mayor is in rehab?
TORY: I just wouldn’t venture [an answer] because how would I know? I always thought that when you went for psychiatric care or you went for rehab that they try to isolate you and focus hard, especially at the beginning, on helping you with your problem. So I found it curious that he was making phone calls and saying it’s like football camp. But I’m in no position to know.

SPACING: Are you concerned about the prospect of Doug Ford running for mayor?
TORY: No. My assumption is that [the mayor] is going to come back into the campaign. If his brother appears as a candidate, that simply means we have to re-calculate. It’s a free country, anyone can run. [But] Doug has not been a constructive force at the city council when it comes to working together to get things done. That’s a big part of my campaign when I talk about liveable, affordable and functional. The functional part is having city council work effectively. I think when people check Doug Ford out against that as one of the litmus tests, he’s not going to fare so well.

SPACING: Should the province eliminate Metrolinx or merge it with the TTC?
TORY: I think it’s a conversation we definitely need to have. I think it should be an open conversation – look at the broad range of options and not rule any out for ideological or political turf reasons. Look at what’s best for the people to get the best public transportation at the lowest cost. Isn’t that what you’re elected to do?

SPACING: Do you think Premier Kathleen Wynne’s dedicated transit financing proposal, as outlined in the budget, is sustainable, or does more work need to be done?
TORY: It’s progress with the dedicated part. On the sustainable part, they may discover that it’s only a start. They get the beginnings of a tick mark there, but not a full tick mark. I also have to come up with an answer to the question of how our share of the money will be organized. I’m obviously obligated to do that and I will.

SPACING: If you become mayor, will you bring a proposal to council recommending that Toronto residents will have to pay extra to fund transit projects?
TORY: What I will do is put forward a proposal well before becoming the mayor as to how I would fund the Yonge Street Relief Line.

SPACING: Will it involve asset sales?
TORY: If I would tell you that now, I wouldn’t have to announce it [later].

SPACING: We’ve had this whole discussion at council and the province about ranked ballots, but the legislation allowed this system of voting for the City of Toronto died on the order paper. Would you want to see it back on the provincial agenda?
TORY: Yes, I’m very open to the discussion. Part of the problem is the deep disaffection with the system and there are a whole bunch of facets – some of it is the conduct of politicians and some of it is how elections produce certain kinds of results. By definition, if I win with 37% of the vote, it means 63% didn’t vote for me. So I think we need to look at ways to increase [participation]. I like to say that Dave Meslin is a kind of grandchild of Civic Action. So my answer is I’d like to see that discussion held. [Meslin’s] done a good job with the grass roots. But I think it is time to have a serious discussion in the provincial parliament and at the city about ways we can make the city’s election system more responsive in a way that will engender more confidence in the system.

SPACING: For the 2018 elections?
TORY: Look, if you have the discussion, there’s no reason you couldn’t have it in time for the next election. It’s like anything else – if you say you have the will to do it, then you’ll do it. You could do it in two years. I’m very open to having that discussion.