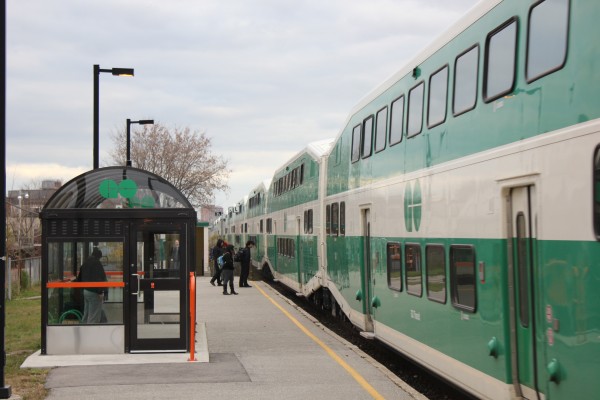 By next spring, business class jet-setters who rely on Pearson Airport will be able to enjoy a direct, 25-minute link between Toronto’s largest airport and its busiest transit hub at Union Station. The four-stop UP Express — with additional boarding at Bloor and Weston GO stations — will be a smooth, high-quality, Wi-Fi equipped public amenity, with service every 15 minutes. The price of admission, an estimated $20-30.

“Torontonians have been waiting for generations for a rapid transit link to our international airport,” Matlow says. “And the UP Express system has been touted as something that we should all be excited about — that it’s going to be ready for the Pan Am Games — and then we’re being told that it’s simply a boutique line for visiting business travelers. That’s not acceptable.”

Moreover, Metrolinx may be pricing themselves out of the market. For his own family, Matlow says, it would actually be cheaper just to spring for a cab.

Matlow will bring a motion before city council this month which recommends requesting Metrolinx arrive at a fare more competitive with other forms of transportation to the airport. As well, the motion recommends requesting the Greater Toronto Airports Authority drop their additional $1.85 fee, per rider, which Metrolinx agreed to implement to compensate the GTAA for the expected loss in parking revenue the express line would create.

“It’s one thing to pay for parking,” he says. “But to pay to not park is just innane.”

Matlow credits Metrolinx with a history of responding to council resolutions like the one he’s proposing.

“We need to engage Metrolinx about the importance of creating a line that is affordable and fair to Toronto residents.”

Anne Marie Aikins, spokesperson for Metrolinx, says decisions about pricing have yet to be made, but the transit agency is looking at a range of possibilities, such as reduced prices for riders boarding at Bloor or Weston.

“We will have variable pricing, but not only for distance,” says Aikins. “We’re looking at families, for groups, for children, for seniors, and for frequent users.”

Aikins says Metrolinx has done their research, but “the proof will come in the pudding.”

“We need to ensure that it’s as economically viable as possible, so that’s what we’re doing now: trying to work through all the variable pricing.”

And, while the line was designed for business/frequent travelers and visitors, Aikins says the agency wants to ensure the line will be accessible to as many people as possible, but that there are still a range of alternative options for would-be flyers, such as TTC or GO buses.

“This is just another option,” Aikins says.

The story of the UP Express, throughout its development, has been plagued with missed opportunities. It could have, for instance, been electrified by time of completion. This, Junction Triangle residents argued for years, would reduce diesel emissions in their neighbourhood, as well as remove the need for the planned 5-metre high sound walls. Currently, the plan is to electrify the line after the pre-Pan Am grand opening, necessitating a substantial retrofitting.

In terms of the service model, Matlow would have liked to see a connection between the UP Express, and the Eglinton Crosstown, currently under construction — something he says was part of the original plan. Still others would have liked to see more stops, so the line might double as added Toronto transit, and not simply a ride to the airport.

None of these additions or alterations are on the horizon, Aikins says, as the selling point for the express line is the competitive, 25 minute travel time.

Ward 16 candidate Jean-Pierre Boutros, who was a top aide to former TTC Chair Karen Stintz, recalls Stintz’s rejected 2012 OneCity transit plan proposed making the line — which would become the UP Express — an Etobicoke express commuter route. The reasoning being, Boutros says: nobody knew if the air-rail link would be viable in five years’ time. Now the investment has been made, Boutros says, and it’s up to Metrolinx to arrive at a sustainable business model.

Spacing put the call out over Twitter, to get our readers’ take on the expected fare. Some were attracted to the speed, and others had no issue with the price. But, to many, the cost to ride seems exorbitant. Still others, who are able to expense their business travel, ventured they’d likely spring for the door-to-door service a taxi or limo can provide, for an average of roughly $50.

@spacing Cost me $46 from Roncy for door to door service. Train would need to cost about ~$16 to be attractive.

@Spacing I live right near Bloor GO. Would consider it if company paid, but would just take TTC out of pocket. — Vic Gedris (@vgedris) August 19, 2014

@Banquos_Banquet if I’m travelling for work, I’m reimbursed for cab/Town Car. I wouldn’t bother with the UP Express. — heather (@LadySnarksalot) August 19, 2014

However you may feel about the fare, as Aikins points out, any additional public transit goes a long way towards easing congestion on our roads. Metrolinx expects the new line to take 1.2 million car trips off the road in first year of operation alone. And an email to Spacing from newly-minted Transportation Minister Steven Del Duca points to comparable fares for airport express lines in London, Oslo, and Tokyo.

Still, after all the fanfare, the breathless, celebratory YouTube videos (later removed), the “well-appointed and welcoming interior”, and the $456-million price tag, it does kind of sting to be told: there’s always the bus.