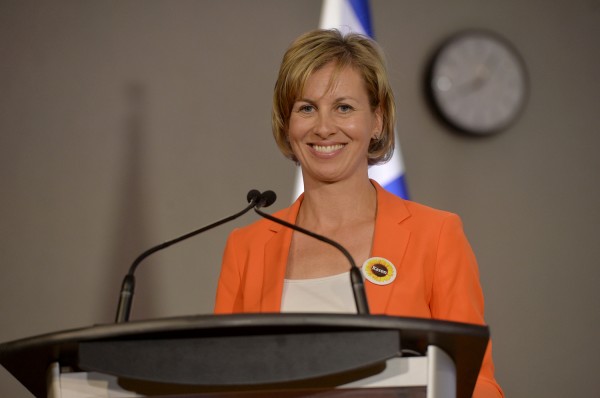 In many ways, Karen Stintz’s entirely predictable departure from the mayoral race last week provides a useful dose of clarity in a still confusing contest.

On a host of issues, Stintz’s position was ideologically, if not programmatically, indistinguishable from John Tory’s. Yes, she favoured the [insert euphemism here] relief line whereas he’s pushing his Smart Track “surface subways” scheme. Yes, she threw all the familiar barbs in his direction (who hasn’t?). But mainly, Stintz and Tory were fishing from the same pond — moderately right-of-centre, middle-to-upper-middle class voters who still desire fiscal prudence on council, but without a “Breaking Bad” cast.

Stintz’s exit — and the resulting support boost for Tory — also tees up the next major psycho-drama in this race: does Olivia Chow’s front-runner slide accelerate or level out, and if the former, will her disenchanted backers de-camp in the direction of Tory or David Soknacki?

Certainly, Chow can’t have too many more weeks like the last one — first, her advisor Warren Kinsella detonating a stink bomb on the eve of a big transit announcement day, followed by an energy-free performance at the Heritage Toronto debate, during which she basically read from her briefing notes instead of addressing the audience. For reasons unclear, Chow still hasn’t fired Kinsella over his “segregationist” tweet and subsequent non-apology apologies, while her public claims about his apparently marginal role in the campaign simply defy credulity.

Yet before we leave Stintz to whatever she ends up doing next in life, it’s worth taking a measure of her political record over the past 11 years. From where I sit, she’s greatly influenced council’s direction, in ways both positive and negative.

No one should have been surprised by Stintz’s aim to become mayor, and I’m not just talking about her 2013 campaign to win approval for a Scarborough subway extension to replace the ailing Scarborough RT.

From the very outset, her political career has been a series of poor-odds victories. With neither name recognition nor an organization, she knocked off a long-standing incumbent, Anne Johnston, to win a seat on council in 2003.

In the waning days of David Miller’s second term, Stintz made enough noise about transit to position herself to be elected chair of the Toronto Transit Commission under the new regime, and this despite the fact that she had long maintained a polite but discernible distance from then Ward 2 councilor Rob Ford.

When she finally went public, in early 2012, with her concerns about the Fords’ $2 billion boondoggle schceme to bury the Eglinton-Crosstown from end to end and cancel the other three approved LRT projects, Stintz somehow cobbled together a coalition of councillors from across the political spectrum and delivered a series of devastating council defeats to the Fords. Again, all long-shot wins.

Yet not content with that string of Hail Mary passes, Stintz, with the assistance of Glenn de Baeremaeker, succeeded the following year in marshalling another council coalition to effectively reverse what she’d achieved in 2012 as a means of positioning herself to run for mayor.

I’ve always been struck by the fact that Stintz, while conservative in her views, made a determined effort to inform herself about the detailed work of local government — something you can’t say of many of the members of council’s right wing. When she stepped into the TTC chair role in 2011, she immersed herself in a highly technical policy field dominated by engineers and conventional wisdom.

Stintz, at certain moments, also revealed a good deal of personal courage. By the time she challenged the Fords’ transit plans, Stintz had already put up with a lot of private bullying, high-handedness and condescension, especially at Doug’s hands.

When she went public, she came in for some breathtakingly harsh and sexist attacks, some of them, no doubt, engineered by the Fords. I was tracking her twitter mentions at the time, and some of the anti-Stintz tweets — and presumably plenty of the email coming in to the office — were shockingly ugly and personal. While she was also getting encouragement from progressives, it’s hard to imagine how it must have felt to suddenly be on the receiving end of that kind of hatred. Scary, I suspect.

During the first LRT showdown, in early 2012, Stintz advanced a potent critique of council’s frustrating tendency to re-litigate major decisions: “How,” she asked, “do we know when we’ve made a decision?” When she sought to launch her “One City” vision in the summer of 2012, which included some frank policy talk about funding and a city-wide focus, Stintz seemed to be trying to rescue the transit debate from the Fords’ boundless capacity for parochialism and magical thinking.

So what, then, to make of her subsequent handling of the Scarborough subway file, and the fact that she ended up explicitly contradicting many of the positions she adopted when she fought to re-instate the original four big LRT projects (including the seven-stop Scarborough LRT)?

It would be easy — and, I think, overly simplistic — to dismiss Stintz as merely another ambitious opportunist seeking high public office. First, accusing a politician of being ambitious is like criticizing a professional athlete for being physically fit: ambition is part of the job description. No one could endure the psychological demands of elections and public office unless they were ambitious, which is not the same thing as naked self-interest.

In part, Stintz’s about-face on the subway file was a response to the Fords’ enormously distorting influence on local politics. (What’s more, she had a cheering section, including from members of the progressive left.) The brothers spent four years filling voters’ heads with all sorts of arrant nonsense about transit, and so it’s hardly surprising that candidates seeking to succeed in that kind of political purple haze must figure out how to reach a profoundly confused electorate.

Consequently, and unfortunately, this kind of environment discourages — or at least discounts — truth-telling while it greatly encourages pandering (e.g., see de Baeremaeker’s rhetoric about how Scarborough “deserves” rapid transit). And Stintz chose to pander. But so has Oliva Chow (“above ground rail”) and John Tory, who pretends that the Scarborough decision is a done deal, even though he knows full well that if he’s elected mayor, he’ll be facing a series of big money votes during the next term in order to get the project moving. (Soknacki is the only front-running candidate who calls ‘em as he sees ‘em. But it’s clearly a risky position.)

So while Stintz deserves plenty of credit for ensuring that transit has become a central focus of the 2014 election, she also deserves blame for perpetuating the confusion and delay that has marred the city’s latest efforts to build new lines. She may also bear partial responsibility for handing the next council a poisoned chalice, in the form of a low-return, ill-advised subway that may cost the city far more than council bargained for in 2013, and will take years to approve, much less begin.

Bottom line: I believe Stintz was serious about seeking to expand transit across Toronto, and was prepared to tell voters it won’t come cheap. But she also allowed herself — no excuses — to succumb to the temptation of electoral calculus instead of building her candidacy around the most effective and fiscally responsible solution, a solution that she herself had once promoted. It’s a complicated legacy.