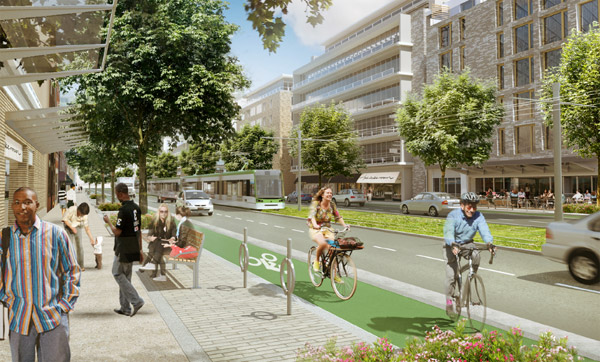 This morning, the Toronto Centre for Active Transportation (TCAT) released the results of a survey of council and mayoral candidates that asked 12 questions about sustainable transportation policies (walking, cycling, transit). The survey was developed as a partnership between TCAT, Walk Toronto and Canada Walks (walking questions), Cycle Toronto (cycling questions) and the Toronto Environmental Alliance (transit questions).  (Disclosure: I was part of the committee that established this survey, representing Walk Toronto).

Overall, the survey showed strong support for sustainable transportation policies, with all of the proposals receiving majority support and several of them receiving overwhelming support.

The highest support (97%, and 100% of responding incumbents) was for establishing School Travel Plans to improve the safety of children walking to school.

The lowest levels of support were for a 4-year TTC fare freeze (58%), stopping the privatization of TTC operations (73%, but 88% of incumbents), and funding residential sidewalk snow clearing by the City in old Toronto (73%, but 83% of incumbents).

You can see the responses for council candidates and mayoral candidates on the TCAT website. For those wishing to dig into the details, the full results are also available as a spreadsheet.

Given the strong support for sustainable transportation overall, and the overwhelming support for certain policies, we should reasonably expect to see at least some of these policies implemented during City Council’s next term.