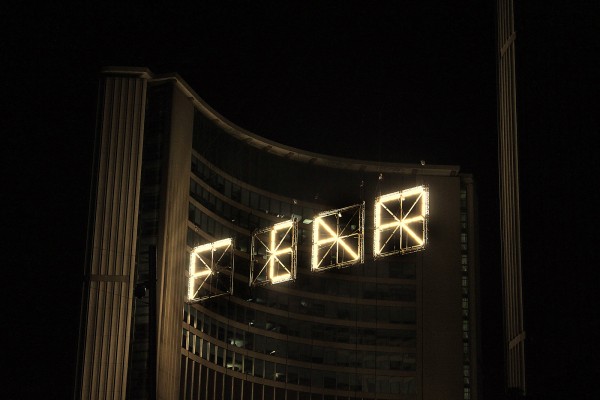 During the scrum following Friday night’s shouty debate about priority neighbourhoods, a Global News reporter asked John Tory if he believed that white privilege exists. Tory, in a clip that ricocheted around the city all weekend, denied it, and then attempted to backtrack by talking about the importance of giving people living in communities like Jane-Finch a “hand up.”

At another debate at the C.D. Howe Institute a few weeks ago, Tory also stated that racism wasn’t a factor. Yet despite such denials, discussion over the role of race in this election — which began with the deluge of odious attacks against Olivia Chow — only intensified after Ward 2  candidate Munira Abukar, who is challenging Rob Ford and Andray Domise, tweeted disturbing images of a campaign flyer with her face scrawled out above the words, “Go home.” Kristyn Wong-Tam has also received a stream of hateful correspondence that blends racism and homophobia.

Anyone who professes surprise that the election has exposed this side of the city needs to re-examine their assumptions. Yes, Toronto is a remarkably diverse, and impressively peaceful, city. We haven’t had the sort of racially-fueled riots that tore up suburban areas in Paris and London in recent years. But it doesn’t follow that the absence of such explosive responses to grinding poverty, social exclusion and racial profiling means that all is well.

Still, the racism narrative is complicated. The Fords gave a lot of people permission to publicly express themselves in ways that they might not have indulged in a different political climate. Moreover, the psycho-geography of racism in Toronto is linked to culture, religion, location, and the social-professional origins of specific newcomer communities. This story plays out in lots of different ways.

My concern is that while racism is getting the lion’s share of attention right now, the class divisions that have fueled urban exclusion are being overlooked.

Consider the data. In 2001, University of Toronto sociologist David Hulchanski released a study [PDF] on the gap between the average net worth of homeowners and tenants. The numbers were bracing: he found that the typical net worth of a Toronto homeowner was about $250,000, compared to just $5,000 for tenants, who represent about 50% of the population. “Homeowners’ wealth increased from being 29 times that of renters in 1984 to 70 times that of renters in 1999,” he concluded at the time. Given real estate trends, that gap has almost certainly widened since then.

Hulchanski’s analysis formed the backdrop to his better known Three Cities study [PDF], which reveals how a once predominantly middle-class city gradually and perhaps inexorably sorted itself into enclaves of high-income earners and low income pockets dominated, presumably, by tenants. (Tellingly, the Harper government earlier this month pulled the plug on funding this work.)

Are the interests of City Three — the aggregated zones of increasingly concentrated poverty — well or even adequately represented on Toronto council?

I think not. While the city does aim some programming at lower-income, tenant heavy neighbourhoods — e.g., the Welcome policy for parks and recreation programs, or free dental service — council’s political agenda is largely set by and for homeowners, developers and commercial property taxpayers.

Dubious? Just consider what would happen to a proposal to re-direct all Section 37 dollars to investments in the public realm and community services in the priority neighbourhoods. A total non-starter, that. We don’t really do redistribution.

Now try this thought experiment: imagine how city council would function if voter turnout among homeowers was really low, but tenants came out to cast ballots in large numbers. Quite differently, I’m guessing.

Conventional wisdom holds that the opposite is true, although the evidence is mixed. A new study by the Maytree Foundation [PDF] concludes that ward-level voter turn-out in the past three elections doesn’t seem to be related to the proportion of tenants. Indeed, turnout in some high-tenant/low-income arrival cities, like Thorncliffe Park, is as high or higher than rates in neighbourhoods dominated by single-family homes. But overall, areas with the highest proportion of newcomers tend to have the lowest voter turn-out rates.

University of Toronto political scientist Zack Taylor has also scrutinized voting patterns in the last three elections, and concludes that lower turnout is correlated to neighbourhoods with more foreign-born residents and visible minorities, more low-income residents, and more people who didn’t finish high school or are working in blue collar jobs. While Taylor says the data doesn’t show an explicit connection between housing tenure and voting behaviour, he does point out that recent immigrants do tend to be poorer and are more likely to rent.

The broader point is that a council more oriented towards tenants may be less fixated on keeping tax hikes at or below the rate of inflation. Structurally, the members of my imaginary council may also feel more obliged to dance with the ones that brung ‘em, which means investing in the sorts of services that cater more to low income residents and matter less to those with means.

There’s little doubt that Chow’s platform, as well as Ari Goldkind’s, speaks much more directly to the goal of rebalancing the city’s agenda so it better addresses the needs of the 50% of the population that so often gets the short shrift.

From where I sit, that’s a vitally important conversation.

Yes, the glimpses of the odious racism have revealed a side of Toronto that many would prefer to ignore — or deny.  But I’d argue that these incidents — and the political reactions to them — may actually be symptomatic of the fact that we now live in a city that is becoming ever more segregated, a place where people from different socio-economic classes have less and less to do with one another.

Is that a story about racism or class division? Probably both. But let’s not lose sight of the latter as we unpack the significance of the former.