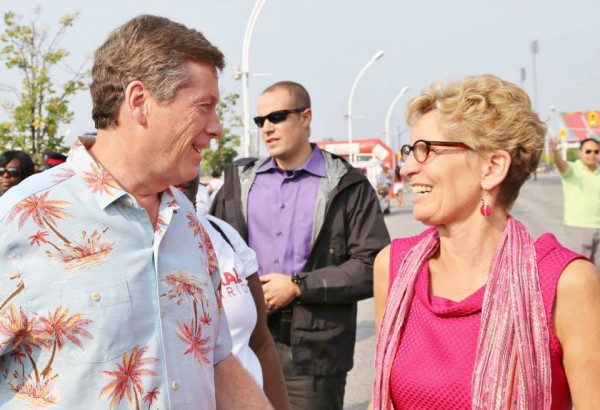 As the major ed-board endorsements start to flow in John Tory’s direction, it seems increasingly clear that his campaign, which focused so tightly on his Smart Track plan, has reverberated with voters on both the centre-right and the centre-left, albeit for a range of reasons.

It’s equally clear that Olivia Chow’s sustained attack on Smart Track — which sharply intensified around Labour Day and reached a kind of crescendo last week with the release of an economist’s critique of Tory’s numbers – has had almost no traction with voters, if the polls are to be believed.

According BigCityPolitics.ca, Chow may have arrested a summer-long decline when she revealed that Tory would either have to demolish homes or dig tunnels for the west end of the line. But despite the shelling directed at the various elements of the Smart Track plan – policy, financing, route, economic assumptions about growth — Chow still lags in every region of the city, including the downtown.

A couple of reflections about her attack on Smart Track:

For weeks, she’s told voters that she’d let her transit decisions be guided by “experts.” But then Chow turned around and asked a family friend, who worked almost thirty years ago as an energy economist for Ontario Hydro, to work up an ostensibly objective critique of Tory’s Smart Track projections. The press release that arrived in my inbox Thursday included a dense spread sheet that purports to project tax-increment financing yields over the next 30 years with the kind of numerical precision that always makes me dubious. For example, the “cumulative value” of Liberty Village development in 2043, the analysis states, will be $6,717,337,000. Please.

The campaign’s daily Question-Period style critiques of Smart Track may have produced a suspicion among some voters that Tory’s numbers are sketchy, but that skepticism appears not to have cut into his support. More troublingly, Chow has talked significantly less about her own transit plan than about his. Yes, she brings up the buses and the Scarborough LRT and the rest. But the bulk of the campaign’s energy – from Chow and Doug Ford as well — has flowed towards Smart Track. Unintended consequence: she has conferred political/policy/brand legitimacy on Tory’s plan by making it such a centerpiece of her rhetoric. Campaigns are about trying to compete on your preferred playing field, and Tory clearly won that crucial tactical skirmish.

Perhaps most significantly, Chow missed an opportunity to unpack the most obvious facet of Tory’s Smart Track pledge, which is that he’s essentially spent the past five months promoting the transit strategy that forms the backbone of Kathleen Wynne’s long-term infrastructure plan for the region.

Metrolinx is at the front end of what will be a lengthy and exhaustive analysis [PDF] of an all-day/two-way electric regional express rail (RER) service, with trains that run in existing GO corridors, including the one that Tory has promoted (RER will be rolled out regionally, and Metrolinx has not released maps). In her first budget, and on the campaign trail before the Liberals’ surprise victory, Wynne pledged $15 billion for Greater Toronto transit, the bulk of it to be spent on RER.

Tory’s decision to slap a catchy brand and various tweaks on the RER was a political master-stroke. With that move, he aligned himself with the City of Toronto’s most important stakeholder (Queen’s Park), bought himself some future leverage with said stakeholder, and succeeded in generating a lot of attention to the importance of beginning the RER roll-out along the route he’s proposed (there are, of course, several other GO corridors that may eventually have RER service).

As for the tax-increment financing, the enormous amount of election debate about the viability of this particular revenue source was almost certainly a red herring. Under existing legislation, the province must approve TIF plans. More importantly, it’s by no means clear how much of the $15 billion allocated to the province’s RER plan, as well as the associated funds that will flow from federal-provincial infrastructure agreements, will go towards that portion of the RER network that mirrors Smart Track. The figure, I predict, will not be trivial, and could be significantly more than the $2.7 billion provincial contribution Tory has bruited. Yet none of this has been transparent, and I’d reckon the lack of specificity, from both the Tory camp and the provincial Liberals, was quite deliberate.

The net result is that the leading candidate spent the bulk of a municipal election campaign promising something Queen’s Park is already planning to do, with or without tax increment financing or some other revenue tool. That expedient dynamic, on its own, is worth contemplating, if only because it underscores the City’s utter helplessness on the transit expansion file.

Chow’s side, however, opted to obsess over the minutiae of Tory’s pro formas instead of hammering away at the big picture, which is the fact that he decided, for tactical reasons, to shill for a regional fix (his line terminates in Mississauga and Markham, after all, and was touted early on as a solution to reverse-commutes) instead of a solution that specifically addresses Toronto’s most immediate problem, which is the over-crowding on the subway and the Yonge corridor in particular.

Consequently, we spent far more time tangled up in circular debates about the commercial property development market in Liberty Village than on the article-of-faith assumption underwriting the Smart Track scheme – that the people who pour into the upper reaches of the Yonge subway will be prepared to head a long way in the opposite direction of their journey to pick up a regional express service so commuters who get on further south don’t have to wait for several trains to go by.

The upshot is that while we may have had a full-throated, though mainly moot, debate over the viability of TIFs, we most assuredly did not have a contest that fully tested really hard questions about long-term priorities, and who sets them.

Tory took the smart (political) track by ceding his transit agenda to Queen’s Park long before he won the race. The tragedy is that his main opponent didn’t do much to make that journey as challenging as the one that faces thousands of TTC riders every single day.