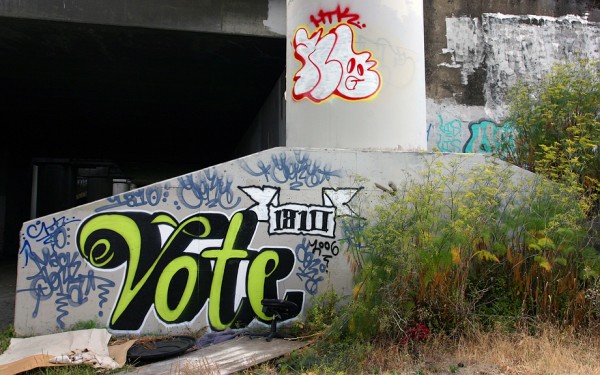 Seventy-five percent of an “authentic” vote, or maybe just 50%? How shall we calculate a coefficient that truly captures the degree of dilution? Call it `h,’ for hedge.

These are deliberately snarky questions, of course. But the surge of partisan handwringing about the implications of strategic voting in next Monday’s election demands a considered answer to the following question:

Why is strategic voting dangerous, as numerous pundits (here, here and here, this latter penned by Olivia Chow’s senior strategist Jamey Heath) have said in recent days, and what makes this particular type of political decision so much less, well, worthy than other forms of electoral choice?

Let’s first lay to rest the old and tired complaint about polls, and the way they apparently distort the electoral process. Yes, they do, but the results aren’t necessarily negative. After all, when the polls are in your candidate’s sails, so to speak, then polls are good and important.

Case in point: a pair of turning point polls for David Miller, released in the late summer/early fall of the 2003 race, which showed him pulling abreast of Barbara Hall for the first time and then surpassing her. Those polls unleashed a wave of donations and volunteers, injected energy into his campaign, and brought more supporters into his camp. Why? Because lots of people read those polls and then made a strategic decision to abandon Hall — the putative front-runner and centre-left standard-bearer — in favour of Miller.

Perhaps the particular complaint about poll-based voting in this race has to do with the notorious inaccuracy of the Forum polls. That complaint would be more compelling if poll numbers were the only data point that voters used to make up their minds. But they’re not.
The reality is that the choice between candidates is difficult and multi-dimensional, and the factors that determine an individual’s vote can take into account a wide range of influences: the three-Ps that the campaign can control — platform, positioning, performance — but also word-of-mouth, media depictions, neighbourhood politics, side-shows, macro social or economic conditions, gut.

What’s more, we live in a world, like it or not, where we constantly make ordinary decisions based on numerous considerations, some of them worthy, others less so. Who’s ever bought a book simply because it was on the New York Times bestseller list? Or shopped at a certain retailer because it’s on one of BlogTO’s top ten round-ups? Chosen a restaurant because it’s busy? Bought a bottle of wine because of its label and price point? Attended a film based on nothing more substantial than a thumb’s up recommendation and a free evening? And on, and on.

Then there’s the psychology of siding with a winner, or a perceived winner. Many people, for example, buy cars merely because they’re popular, with claims of consumer popularity itself serving as a kind of proxy for quality.

I don’t want to equate ordinary consumer decisions with votes – these are obviously profoundly different actions, with sharply different consequences. What’s more, a poll result is clearly not the same sort of data as information about a bestselling product, because the poll anticipates a result that has yet to take place.

Still, the mental processes are necessarily similar – the constant weighing and re-weighing of incomplete information, and the ever-present struggle to find some kind of balance between image and authenticity, quality and fad.

In this election, I’d argue, the ballot question has always been about the continued presence of the Fords atop our rickety civic pyramid. We talked about all sorts of other things, of course, but the self-evident common denominator between the vast majority of John Tory’s backers and Chow’s is that neither group wanted a Ford in the mayor’s office.

And so it followed that Chow and Tory were forced to spend the past ten months presenting voters with alternative models. The two camps argued, as they should, about which candidate offered up a more meaningful difference. All that positioning, plus the polling plus a hundred other factors, brought us to now.

Yet if Chow had run a stronger campaign, and if Tory had run a weaker one, would we be hearing the same kind of fretting about strategic voting? What if we had reached October 22, and Chow, Tory and Doug Ford were neck-and-neck-and-neck? I’d say the calls for strategic voting would be coming fast and furious from both the Tory and Chow camps. So this stuff cuts both ways.

The other point to make here has to do with the underlying effectiveness of the two campaigns, a topic about which much digital ink has already been spilled. Let me add these observations:

Chow’s value proposition was fundamentally and fatally descriptive — her campaign fore-grounded the way she personally reflected the city as it exists in 2014, and then added in some relatively modest programs as proof of concept. What it lacked was a big move, and a specific, as opposed to general, vision of the future.

Tory, in what can only be described as a monumentally ironic twist, proved to be far more adroit at delivering a campaign informed by Jack Layton-style propositional politics. He led with one ambitious idea, just as David Miller did in 2003, and used that pitch as a means of illustrating not just his approach to leadership, but a fairly specific picture of the city’s future.

To counter Ford, in sum, the conservative ran on a spending platform, and the social democrat campaigned on an austerity program. That was the choice, in a nutshell.

Late-in-the-race polls may push voters in one direction or another. But the notion that these decisions can be divorced from everything else that transpired in this crazy race presumes a hopelessly disengaged electorate. Moreover, the strategic voting allegation implies that Chow was entitled to the voters on the centre-left.

The reality is that we’ve trudged through an exhausting election that posed extremely thorny questions, none of which are easily reduced to the either/or dynamic of voting. I respect the fact that many Chow’s backers have issues about strategic voting at this late stage. But I’d hope they don’t, in the process, belittle the decision-making processes of the many progressive-minded Torontonians who were genuinely torn about what to do. Surely, their votes also count.