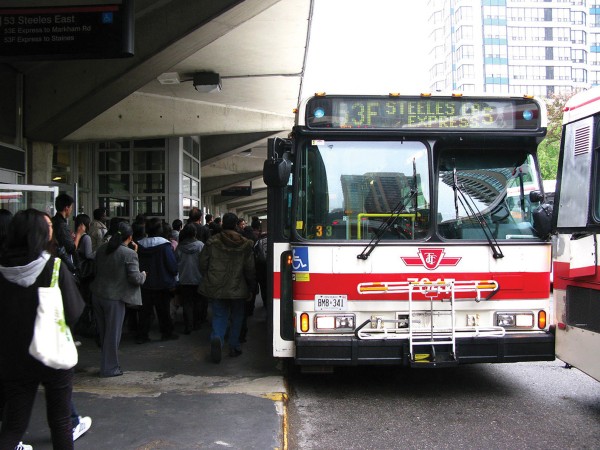 Toronto’s intense debate about transit and mobility has focused on access, cost and travel speed. Another important issue, one that’s often left out of the conversation, is greenhouse gas emissions. All motorized trips have environmental impacts – all motorized trips, as well as the construction and maintenance of transit infrastructure (roads and highways, subway tunnels, streetcar tracks), add greenhouse gases to the atmosphere. How far we travel, how we do it (car, bus, subway, bike, etc), and what we build to facilitate travel all bring some degree of greenhouse gas emissions and, by extension, impact on global climate change.

Why is this of importance to the ongoing transit debate? The type of infrastructure that gets built will strongly influence the types of travel choices people make and the emissions associated with each trip. For instance, where walking or cycling are options, trips can be made without any greenhouse gas emissions, but getting more people onto bikes will require more bike routes and a change in tone on cycling policy. For powered trips, public transit is generally much “greener” than private transit, like cars or motorcycles. A bus is greener than car travel as long as the bus route averages an occupancy of six; in other words, as long as there are at least six passengers on every bus, those passengers are contributing less carbon to the atmosphere than drivers in private vehicles. Streetcars, light rail, and the subway need to average only a few people per carriage to emit fewer greenhouse gases per passenger kilometer travelled than cars.

Transport emissions are increasing for a number of reasons: The city is growing, more people means more trips; these trips are also getting longer, annual average travel distance is Canada (PDF) is increasing, often in larger cars (there are more SUVs on the road). Transportation is making up a growing slice of the emissions pie, now accounting for 36% of total emissions, up from 27% in 1990. It could appear that this doesn’t matter given the overall improvement in greenhouse gas output, but a large part of the progress made so far comes from the closing of Ontario’s coal plants, which resulted in much cleaner electricity for Toronto. The electricity supply mix in Ontario is now relatively green (PDF) and will be hard to make much greener over the coming decades. Further emission reductions will need to come from other sectors.

Part of the debate in Toronto centers on what should be built where, with a popular preference for subway over other forms of transit like bus routes or light rail. Subways, built underground with tunnels and intricate stations, require ten times more material than does transit built on the surface. This means that to pay back the greenhouse gas emissions associated with building a subway, the ridership has to be much higher than for a bus or light rail system. An underused system still needs to be lit, staffed, and powered resulting in many greenhouse gas emission despite its low ridership.

Toronto has numerous pressing reasons to get aggressive on the transit file, many of which have been discussed ad nauseam over the past four years. The greenhouse gas impact of transport and infrastructure has been mostly lost from the conversation. The city has a commitment to live up to. Given the long life span of infrastructure, decisions made now will continue to impact Toronto’s environmental footprint far into the future.

Shoshanna Saxe is an engineer and a PhD candidate at the University of Cambridge. Say hello on twitter @shoshannasaxe