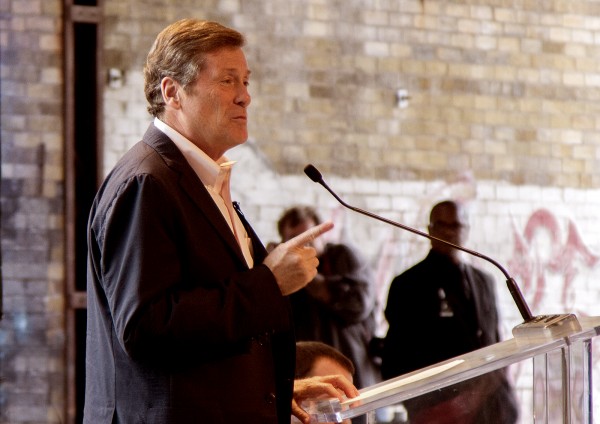 At their confab in Toronto last week, the Federation of Canadian Municipalities big city mayors caucus welcomed John Tory like the return of the prodigal son. “I can’t underscore enough the importance of having Toronto at the table, fully engaged again,” gushed Edmonton mayor Don Iveson, according to The Globe and Mail.

I’m also glad that Tory showed up, smiled for the cameras and made the right noises about pushing Ottawa to treat its “marriage” with cities as a seven-days-a-week affair. But all the adulation reminded me a bit of the Nobel Foundation’s decision to award U.S. president Barack Obama the peace prize about ten minutes after he’d been elected.

Maybe we should wait and see if the guy can advocate effectively before slathering on the gratitude.

With a federal election possibly coming as early as March and certainly by the fall, Tory – who, as mayor, is officially designated to manage intergovernmental relations – will have to figure out what kind of role he’s prepared to play in this exquisitely important campaign.

Besides the policy advocacy Tory oversaw during his Civic Action days, there’s little on his resume to indicate how he’ll manage the politics. But his long-standing connections with Stephen Harper’s Conservatives (as well as those of his staff) should cause everyone to wonder if he’ll be pulling his punches or deftly allowing others – e.g., Calgary’s Naheed Nenshi – to do the heavy rhetorical lifting.

By breeding and temperament, Tory is the type of person who prefers to deal with his political counterparties in person, and behind closed doors. Frankly, it’s easier that way, because the fighting doesn’t take place in public, on camera.

Few politicians want to reach for the nuclear codes, but they have to be prepared to do so when pushed. If I had to cite one of the gutsiest acts of political brinksmanship I’ve witnessed at City Hall, I’d go back to the early days of amalgamation, when the Mike Harris Tories reneged on a private pledge to provide the City with transition funds.

When then-mayor Mel Lastman found out, he flipped out, called a press conference at Metro Hall and accused Harris of lying to his face. Lastman was a peek-a-boo Tory. He knew he was taking a huge risk, but he called out Harris nonetheless. (The gambit earned Lastman an important concession – a no-interest $200 million “loan” that the province eventually wrote off.)

Fast-forward to the current budget cycle, and the food fight over that $86 million shortfall on social housing grants from the province. Despite a much-hyped pre-budget tete-a-tete with Premier Kathleen Wynne, Tory offered at best a half-hearted push back when the Liberals reneged on their policy to upload such costs. Obviously, the mayor has decided to pick his battles. But it’s difficult to ignore the nagging feeling that if he’ll allow himself to be rolled once, he’ll let it happen again.

There are other causes for concern. As chair of Civic Action and a radio show host, Tory frequently talked about the need for revenue tools to help fund transit in Greater Toronto. He, and many others, reckoned that such campaigns would create more political space in which the elected officials could move. But when he shifted (back) to the political side of that equation, he ran as fast as he possibly could from the case for revenue tools (to be fair, so did the provincial Liberals, who had initiated the debate). He opted instead for one of those magical thinking taxes that apparently generate dollars without generating political discontent.

I’ve also found myself wondering how Tory will play the issue of the cancelled long-form census, one of the Harper government’s most dim-witted decisions, and a major headache for municipal planners. Nenshi loves to  hammer the Harper government about the census. But asked by The Globe and Mail about the census file on the eve of the mayor’s summit, Tory said he’d raise the issue with the mayors and “ask if this is a problem they are facing.” Really? For someone who’s had his head in municipal affairs for years, that response seems weirdly hedgy.

As the election draws nearer, the FCM and the big city mayors caucus will amp up their pressure-group advocacy, likely focusing on the need for more cash for transit and affordable housing. But voters don’t pay attention to the FCM press releases and public information campaigns. They pay attention to what comes out of the mouths of high profile mayors – figures like Iveson, Nenshi, Vancouver’s Gregor Robertson and, presumably, Mississauga’s Bonnie Crombie.

When David Miller was in the mayor’s chair, he didn’t just participate in the orchestrated pan-urban advocacy campaigns. Miller actually got out front of the other big city mayors, for example launching, in 2007, the One-Cent Now campaign, a high-visibility effort which sought to push Ottawa to hand over a portion of the GST. The FCM later adopted the campaign, although not all the big city mayors did.

During federal elections, Miller also made a point of publicly backing a few select candidates – the Liberals’ John Godfrey (Miller’s dance partner during the Paul Martin government’s New Deal for Cities program), and the NDP’s Peggy Nash. He didn’t, however, offer up support to any Tories, because he didn’t see any who were prepared to speak up for Toronto’s interests in caucus or cabinet.

Point is, Miller had political skin in the game. Those gestures clearly telegraphed a broad message to the federal parties: “I’m a popular mayor with a big bullhorn and a tall soap box, and I will deploy said tools until I get what I want.”

When the Tories go to the polls, they’ll tell voters about the billions they’ve spent or will spend on infrastructure. The big city mayors will collectively say it’s not enough, especially for transit. But each mayor must sell that line. Each mayor will have to make it clear that their own support is available, but for a price. And at a certain point in the campaign, each mayor will have to decide which horse to back.

Will Tory take a strong stand when the writ drops, or will he hedge and hide behind others’ voices? From what I’ve seen so far, the answer is anything but clear.