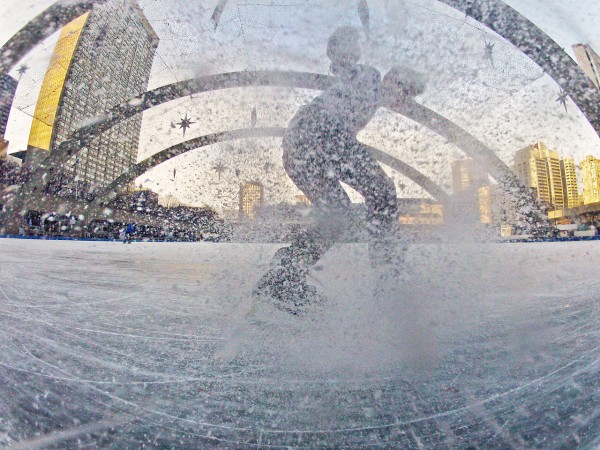 Here’s my question about last week’s deal to have two private firms ante up funds to keep some of the City’s rinks open:

Is there any kind of firewall between these acts of apparent corporate altruism and the City’s procurement processes, especially given the mayor’s involvement in brokering said contributions?

As The Globe and Mail reported, two companies – Maple Leafs Sports and Entertainment and Green for Life Environmental – each contributed $100,000 to allow the City to continue operating some of its outdoor rinks. “We had calls well before noon from a number of companies who were stepping up to say ‘we’d like to help in some way to extend the skating season,’” Mr. Tory told The Globe and Mail’s Ann Hui, who duly noted that both firms have “extensive dealings” with the City.

GFL, of course, won the District 2 residential waste collection deal during the Ford era, and has since been dinged with stern — and potentially contract-killing — warnings about its truck safety record. The City has put the outsourcing for other areas on hold, pending further review. MLSE, in turn, not only was the recipient of a $10 million city loan for expanded the BMO Field; it has sponsored sports facilities in priority neighbourhoods in exchange for branding rights.

But what didn’t get mentioned in Friday’s coverage was the whole issue of future considerations, as they say in the sports world, and whether there’s an understanding, implicit or explicit, that such outlays will stand either firm in good stead at some later point.

GFL’s expectations are fairly transparent, and the company’s long history of sour relationships with its municipal clients suggests GFL would likely leap at any opportunity to burnish its image.

And what about MLSE? What do we know about that organization’s future expectations? Not much, but consider this little detail: according to the lobbyist registry, Bell Inc. CEO George Cope and his head of government relations Simon Dwyer had a one-on-one with Tory on January 20, 2015, to discuss, in the registry’s unhelpful boilerplate, “new business and contracts that may come outside of any current business currently on the table.” The registry also notes the subject discussed was technology procurement. (For those of you following along at home, the registration number is SM19021.)

Also worth noting that Bell, in December, 2011, joined forces with Rogers to buy 75% of MLSE, with Bell paying $398 million for the acquisition. Rogers, through a complicated adjacent transaction, ended up with about half of Bell’s stake.

In my experience, CEOs of Cope’s stature don’t come a’ calling at City Hall all that often unless there’s something very significant on their minds. Cope, who has been head of Bell since 2008 and donated to Tory’s campaign, in fact has never registered as a lobbyist previously, although lots of Bell minions — account executives and engineers, etc. — do appear on the City registry.

Did the subject of hockey rinks come up at that January session? The disclosure record doesn’t shed any light on small talk, or much else of substance, for that matter. What we do know, however, is that Tory, as of last Friday’s good news presser about the rinks, certainly knew he’d met with Cope to talk Bell business. And he most definitely understood the corporate relationship between Bell, Rogers and MLSE, for reasons I probably don’t need to explain. None of that, however, was disclosed when the mayor touted the $100,000 contribution.

It should also be noted that the lobbyist registry, remarkably, contains no entries for Green For Life.

Perhaps this is all innocuous good-corporate-citizenship stuff. I don’t discount that possibility: after all, Bell has put its considerable heft behind the “Let’s Talk” campaign to draw attention to mental health issues — a cause that very few companies have had the guts to associate themselves with.

It’s also possible that Tory, who has spent his entire adult/professional life functioning in that rarefied world where corporate, social and philanthropic circles intersect, is simply doing what comes naturally, so to speak – making big money asks of prominent donors and networks of well-connected executives.

But with those generous caveats in place, it’s most certainly worth saying that neither the mayor nor the City offered up any sort of explanation as to how these two particular donors were “selected” among those who inquired — after all, as Tory himself said, he had lots of offers.

Nor is it clear who called whom in these two instances.

Nor is it clear whether the mayor asked city council’s accountability officers to offer their professional advice on the appropriateness of directly soliciting donations from firms that have open files with the city’s procurement divisions.

Nor is there evidence that the City of Toronto Partnerships Office, which provides bureaucratic structure around donations and branding opportunities, was invited to manage this outreach effort on behalf of the city’s skating enthusiasts.

Nor, finally, I am prepared to chalk this one up to rookie mistakes. Tory and his team aren’t newbies in the world of government. They know where the lines are.

So was he, to borrow a phrase from the sport in question, off-side?

Let’s put it this way: if these MLSE/GFL donations are genuinely philanthropic, proffered with no expectation of later recompense, then they’d surely survive the kind of transparency and accountability that such transactions demand.