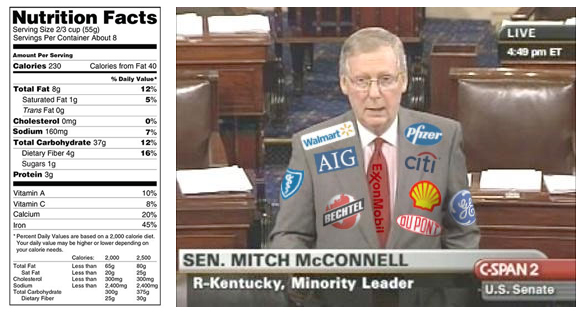 Five years ago, Toronto City Council banned all corporate and union contributions for municipal election campaigns. This was supposed to eliminate the influence of big money at City Hall, and give power back to you and me – the voters.

What would you say if I told that the situation has gotten worse since then, instead of better? What if I told you that corporations are still funneling thousands of dollars into election campaigns, but in a way that is harder to track and less accountable? Read on.

Every day, corporate lobbyists roam the corridors of City Hall trying to influence the outcome of government decisions. They’re paid generously for their work, and they’re good at it.

We have three important mechanisms in place to minimise the influence of theses lobbyists and to ensure that politicians remain accountable to the voters. But these mechanisms are all failing us – because no one is connecting the dots between them.

1) The lobbyist registry.  This program was created under former mayor David Miller. It’s a good program. It requires that each and every meeting or communication between a lobbyist and Councillor must be publicly declared. That way, we know who is trying to influence whom.

2) Election contributions. We all know that money can corrupt the decision-making process. That’s why all candidates running for City Council must publicly declare the source of all of their campaign contributions.

3) Voting records. The accountability of our City Councillors depends on the availability of their voting records. How could we judge their performance, without knowing how they voted? The City’s TMMIS system, provides that data. (Terrible name… great resource)

So – no problem, right? We’ve got the lobbyist registry, a list of all election contributions, and a record of every vote at City Hall. All the bases are covered.  Our Councillors’ work is transparent and accountable.

Here’s a good way of looking at it:

You’ve probably seen (and used) the mandatory labeling that we see on packaged foods.  It provides you with information about the food’s nutritional val

ue, including vitamins, sugar content, calories, etc.  These charts are comprised of three pieces of data:

a) The amount of each nutrient contained in the package.

b) The Recommended Daily Intake (RDI) for each nutrient.

This is good data to have, but what makes it really effective and practical is that Health Canada forces all food manufacturers to cross-reference all three pieces of data, on one simple label.

And although the Lobbyist Registry and the mandatory food labeling legislation were both introduced in the same year (2007), it’s interesting to note how differently they dictate the rules and formats for disclosure.  Imagine if the food labeling operated the same way as our mechanisms at City Hall. You want to buy a box of cereal, and you have to check three websites to find out the nutrition value. One website tells you how much calcium is in the whole box, another website tells you how much calcium you need each day, and a third website tells you how many bowls of cereal are in each box. Prediction: No one would look at any of the websites, and it would be as if the data didn’t exist.

And that’s what we have at City Hall.  Here’s a real-life example of what I’m talking about:

Last year, a company called Allvision teamed up with Metrolinx to apply for permission to install eight massive digital billboards on highways 401 and 427.  These billboards break every rule in the book: they’re too big, too bright, and are extremely dangerous for drivers (since they are  literally designed with the sole purpose of distracting drivers’ attention away from the road.  It’s insane). City staff recommended against the signs (of course). The citizen Sign Advisory Committee rejected the signs too. City Councillors were presented with all the facts about safety, about neighbourhood impact, about the lack of community consultation, incorrect information used in the application…. but they voted in favour of the signs anyway.

And that was it.  The media pretty much ignored the whole thing.  No one knew it happened.

So – how DID it happen? Why did Councillors ignore the data, ignore science, and ignore the proper democratic process? Well, if you look at the lobbyist registry, you’ll find some clues.  Let’s just take two of the registered lobbyists, and see how many meetings they had about the Metrolinx billboards.

Woah. Can you imagine how much $$ that costs? There are literally HUNDREDS of meetings happening here, all on ONE SINGLE ISSUE. Allvision and Metrolinx are trying as hard as they can to influence the process with paid lobbyists meeting repeatedly with Councillors and senior staff.

But let’s take a closer look. What about campaign contributions? As I noted earlier, in Toronto we’ve banned corporate donations to Council candidates. So… Allvision and Metrolinx couldn’t be trying to influence the process by giving money directly to politicians’ campaigns… right? Wrong. A quick look at the Lobbyist Registry reveals this:

This is how decisions are being made at City Hall.  And we’re mostly blind to it.

Some political activists have called for NASCAR-style uniforms for politicians, showing who all their “sponsors” are. This would be funny and indeed useful for voters… but isn’t really a practical solution. The practical approach is simple: a single website that aggregates all three data sets at City Hall, and produces charts and graphs automatically, for each Councillor, each lobbyist, and each vote, all cross-referenced and interactive.

Better yet, the two pre-vote data sets (lobbyist visits and financial contributions) should already be posted online, cross-referenced, BEFORE each vote. There could be a live-feed of each Council meeting, with charts being automatically produced before each vote.  How many Councillors were lobbied on this issue, how much money was spent, and who received that money? This would be an amazing tool for citizens (and media), but could also perhaps have an impact on how politicians behave.

After all, the mandatory food labels don’t just inform shoppers, they also act as an incentive for food manufacturers to make healthier food. Knowing that the calorie count and sugar quantity is going to be prominently displayed, forces the companies to reduce the amount of sugar and calories in their food.

So perhaps politicians would behave differently as well, knowing that their meetings with lobbyists, and the dollars they have accepted directly from those lobbyists, was all publicly displayed clearly – before each vote.

So, do Toronto’s citizens have the skills to create this tool?  I think we do.  Here’s some good examples of good data work we’ve already seen about municipal issues:

So we know how to play with data in Toronto.  I’m hoping to pull a team together to look at this issue, and try to create some new tools for citizens and media to use!

The movement for Open Data has been very successful at getting raw information available. And the creation of the Lobbyist Registry and the banning of corporate election contributions were important steps. But it’s time to connect the dots, and put all of this data to work!

If you think this is important, please share this post. And if you want to get involved – please let me know!